FUN & GAMES AT THE WHITNEY WITH HELIO OITICICA 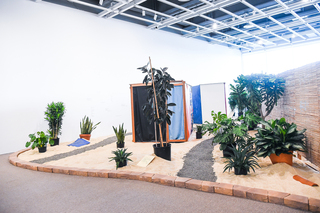 Helio Oiticica (1937–1980), installation view of Tropicália (1966–67) at the Carnegie Museum of Art, Pittsburgh, 2016. Plants, sand, birds, and poems by Roberta Camila Salgado, dimensions variable. Collection of César and Claudio Oiticica. © César and Claudio Oiticica. Image courtesy Carnegie Museum of Art, Pittsburgh. Photograph by Bryan Conley.
If you don’t care much for painting or sculpture, but want to have a fun time reliving the heady days of the late ‘60s and the early ‘70s, when postmodernism was still (relatively) fresh & original, let me recommend “Hélio Oiticica: To Organize Delirium,” at the Whitney Museum of American Art (through October 1).

To be sure, Hélio Oiticica (pronounced EL-ee-oh Oi-te-SEEK-ah) wasn’t strictly speaking an American artist. He was born (in 1937) in Brazil, and died there, too (in 1980), but he spent two years in Washington DC as a child (when his father had a Guggenheim there), and lived in New York from 1970 to 1978.

Nor is this the first time that the Whitney has stretched its definitions of “American art.” Not only has the Japanese Yayoi Kusama benefited from its broadmindedness in the recent past, but as far back as 1971, the museum played host to abstractions by the Guyanese-born, London-based Frank Bowling.

After all, New York is a truly international city, even if it has also produced the occasional prominent racist (naming no names).

I attended the media preview of this show, and in his introductory “remarks,” Director Adam Weinberg rejoiced in the fact that this show was “subversive.”

He also said that Oiticica had been in “Information,” MoMA’s big show of conceptual art in 1970 (I too was in this show, though I didn’t know it at the time—an artist named Walter de Maria photocopied the story I’d done on him in Time in 1969, blew it up to mural size, and sent it to “Information” as his contribution—thereby sending Hilton Kramer, who covered the show for the NY Times, into paroxysms of rage—but I digress).

To judge from the works in the Whitney show, Oiticica in his prime was more nearly a funnyman in the style of New York practitioners of “happenings” and other participatory or performance art like Allan Kaprow & Claes Oldenburg.

The biggest amusements in the Whitney show are three large examples of what were known in the 1960s and 70s as “environments,” and are now called “installations” (old wine in new bottles). I shall describe them in due course.

However, the show starts tamely enough by presenting the artist’s earliest works, from the late 50s or early 60s: modest and not particularly distinguished geometric abstract paintings (most Latin American artists stayed right through the 1940s and 50s with the hard-edged, geometric abstract style that had flourished in Paris in the 1920s and 1930s – they never did join the more painterly abstractions of postwar New York).

Next, we get larger minimalist panels in reasonably bright colors, either freestanding or dangling from the ceilings but otherwise not unlike the works of Robert Mangold or Donald Judd (with a dash of Lucas Samaras, if my notes are to be believed, with a mirrored walk-in box).

These are billed as the next stage toward participatory art – viewers are supposed to walk around them to get their full flavor. Next comes a gallery with small, boxlike constructions that were designed to be picked up and handled, though they have become too fragile to be handled here.

Then comes another gallery, this one with festive, carneval-like costumes (actually, reconstructions of costumes that Oiticica made), and these you are free – in fact, encouraged -- to try on.

All of these works belong to the artist’s early years in Brazil and London, but next comes an area devoted to his time in the Big Apple, dominated by a large gallery in which are displayed facsimiles of the artist’s literary efforts, accompanied by segments from his movies in a Warholian vein, complete with a transvestite performer.

This space is surrounded by darkened rooms with further artworks; the only one of these that I investigated had a container-full of nail files outside the door. Museum-goers were invited to take one, go inside the room, lie down on a mat & watch a movie while filing their nails.

(At the media preview, I encountered one lady just emerging with an unused nail file. “I have a manicurist!” she announced, happily, evidently feeling this absolved her of the need to file her nails in the Whitney)

However, the three big “immersive environments” are the main attraction, with two located, side by side, at the western side of the museum floor and the third at the eastern side.

This show has already appeared at the Carnegie Museum of Art in Pittsburgh and at the Art Institute of Chicago, and from reviews online, I gather that the New York presentation is not identical with the others.

However, all three of these environments, as installed in New York, are big enough to walk through. All feature some (or a lot of) sand on the floor, and two feature pools of water as part of the act; museum-goers are supposed to remove their shoes before embarking upon their explorations.

The first of these three is “Tropicália,” and it seems to have been Oiticica’s first big success, unveiled in Rio de Janeiro in 1967 and so popular that it gave its name to a whole subculture, and to a famous song.

Amid all the sand stands a selection of potted plants – of tropical varieties, the sort normally seen only indoors in temperate climes. Little gravel paths lead to colorful little booths made of fabrics of various kinds and meant to suggest houses in the favelas, or Brazilian slums.

There are plaques with passages from poetry by Roberta Camila Salgado, various items or messages inside the mock-houses, and a cage with two real live parrots. What fun!

The second of these three is “Éden,” which was premiered in 1969 as part of the Oiticica retrospective at the Whitechapel Art Gallery in London and is installed right next to “Tropicália.”

It’s bigger, with more sand but no potted plants. It does have odd structures in which can be found bins with beds or hay in them so you can lie down. It also has a puddle of water if you want to play you’re at the beach, as well as books and magazines if you want to read….

On the opposite side of the museum floor (facing the Manhattan skyline) is the third of these “immersive environments.” This one is called “PN 27. Penetrable.’Rijanviera” and dates from 1979, after Oiticica had returned to Brazil.

It’s a smaller favela-like structure, again surrounded by suggestions of “nature” and there is only one way you can enter it – no way to avoid walking through sand, rocks and water.

As I didn’t want to take off my shoes, I blush to admit that I didn’t enter this piece, so I have to rely on Holland Cotter’s ecstatic description of its innards in the New York Times.

Although I found this show entertaining, I have to admit I still don’t know exactly what Oiticica did, and how much has been “reconstructed” by latter-day curators.

Obviously the live birds and the potted plants are not the original ones, and I would be surprised if this was the original sand, water and gravel.

If you read the fine print in the labels, you will also find that an awful lot of the rest of the show is “reconstructions” or “facsimiles” and “exhibition copies” based on the collection of César & Claudio Oiticica, the artist’s brothers (he doesn’t seem to have left any children, most likely because he was gay).

Some of the online reviews complain that much of his output was burned up in a disastrous fire in 2009, but I can’t help thinking that more of what is already on view might be too much – jokes are only good the first time around, and if repeated over and over again no longer amuse.

But amuse they certainly do in this show, not least the snooker table that was inspired by the “Night Café” of Van Gogh. It is complete with balls & cues so that anybody can play -- and everybody was encouraged to.

I was still taking notes after the media preview had ended, and the galleries had been opened to a members’ preview instead. I then saw two boys, maybe ten or twelve years old, playing snooker, and they were not bad.

After they'd left, I also noticed on the snooker table a little booklet called something like “The Whitney for Kids.” I got hold of a copy of this booklet, curious to see if Oiticica was recommended for children, but instead the booklet contained only the tamest sort of questions designed to help children respond to paintings by people like Thomas Hart Benton.

I am here to tell you that Benton (and almost any other painter you could name in the Whitney) is no competition in the minds of most children for the sandbox follies of Oiticica.

Most of their elders nowadays are terrified of being thought old-fashioned or philistine if they don’t endorse Oiticica too. However, to make sure they can accept him as a major artist by today’s cockamamie standards, the show’s accompanying literature (and the rhetoric at the media preview) makes (and made) a big point of underlining how all or most of this work can be viewed as a passionate protest against dictatorship – as Brazil had been taken over by a military junta in 1964—and how it is even further timely because it was made not only by a gay man but also a Latino.

Personally, I think you should just try & enjoy the work because it offers an excuse for kicking off your shoes on a warm September day--and hope that the kiddies will learn in time that art can give even greater pleasure when all you do is stand & look at it.