FUN & WORTHINESS AT THE MORGAN 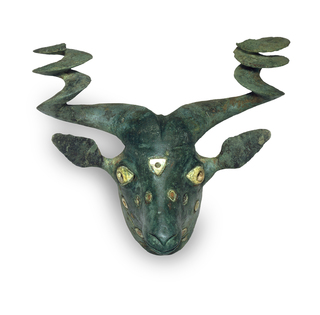 Head of a Markhor Goat, Mesopotamia, Sumerian, Early Dynastic III, ca. 2550-2250 B.C. Copper alloy, shell, and red stone. University of Pennsylvania Museum of Archaeology and Anthropology, Philadelphia; 29-20-3.
The Morgan Library and Museum has at least two shows this summer of interest to the art world. The largest, worthy one is “Henry James and American Painting” (through September 10). The smallest, fun one is “Noah’s Beasts: Sculpted Animals from Ancient Mesopotamia” (through August 27).

FIRST, THE WORTHY ONE

“Henry James and American Painting” is devoted to the distinguished novelist who was born in 1843 in New York. After a peripatetic childhood, he eventually settled in London, where he died in 1916, already one of America’s best known expatriates.

Most of his many novels and novellas deal with Americans in Europe, and contrast the innocence and idealism of America with the wisdom and cynicism of Europe.

His claims to fame rest primarily upon these novels and novellas, of which he wrote at least 20 (and maybe 25). He also published art criticism, theater criticism, literary criticism, travelogues and autobiographical material; he wrote thousands of letters, and tried very hard to write plays (without much success).

Over the years, I’ve read a handful of his books of fiction, starting with The Turn of the Screw (1898) when I was still in high school and was told it was a ghost story (I liked mysteries early on).

In college, I believe that I was assigned The Portrait of a Lady (1881) in freshman year, and somewhere along the line (in those days when I still read novels for pleasure) I think I absorbed The Bostonians (1886) and maybe also The Ambassadors (1903).

I know I read Daisy Miller (1878) in the 1990s, to find out how I could best describe another novel by a man about a young woman coming of age, Groove, Bang and Jive Around (1969) by Steve Cannon. I concluded that the latter tome was best described as a cross between Daisy Miller and Henry Miller, that deliciously salacious expatriate of the 1920s and 1930s.

I’ve seen the play and movie versions of The Heiress, both of which are closely based upon James’s Washington Square (1881).

Maybe my life experience when I read them wasn’t large enough to enable me to fully appreciate them. But among novels that were written prior to the modern period & that I liked better, I’d count Jane Eyre, Wuthering Heights, Vanity Fair, Pride and Prejudice, The Way of all Flesh, Erewhon, The Warden, The Old Wives’ Tale, Pamela, Moll Flanders, and works by two great 18th century comic masters, Henry Fielding & Jonathan Swift.

That said, the Morgan’s show is certainly worthy and does its best to combine its presentation of James with his interests in American art. Occupying all of the one of the large galleries on the street level of the museum, it offers more than 50 paintings, drawings, watercolors, sculptures, photographs, manuscripts, letters, and printed books, which serve to round out the presentation.

The whole is set into a very cool-and- shady-looking installation, with more of those darkly-painted forest green walls and deep maroon partitions that are so effective in the Guggenheim’s “Symbolism” show.

However, although James wrote art criticism, this show doesn’t rely upon it for its choice of artists. This is probably just as well, since James was ambivalent about Winslow Homer, and couldn’t relate to the impressionists or James Abbott McNeil Whistler, either, for years.

As nearly as I can tell (without spending hours on additional research), he was most at home with relatively academic painters and Old Masters from the Renaissance and the baroque, so instead of following such leads, the show focuses on contemporary artists whom James knew socially.

These include Whistler (whose work James eventually came to like), John Singer Sargent (whose work James liked immediately) & John La Farge (a formative influence in James’s early years, though considered by some art historians to be more significant for his writings on behalf of French Romantic painters than for his paintings).

Both La Farge’s wistful 1862 portrait of James as a young man and Sargent’s masterful 1913 portrait of him as an old one are notable additions to this show.

“In a Medici Villa” (1906), a Sargent watercolor, and Sargent’s oil portrait of “Robert Louis Stevenson and His Wife” (1885) stand out as well, while Whistler’s classic “Nocturne, Blue and Gold: Battersea Reach” (1872-78), though subdued, is also lovely.

The work by these three is the best on view, but the show also includes works by lesser known, often relatively academic figures like Ellen Gertrude Emmet Rand, grandmother of the late Williamsburg artist & gallerist, Ellen Rand, and Philadelphia society portraitist Cecilia Beaux.

Among artists who might have been considered more avant-garde, we see a figure study by William Morris Hunt, a Boston admirer of the Barbizon School, and a portrait by Monet disciple Lila Cabot Perry of her daughter (although the portrait is too dark to look at all like Monet).

Presented as being of particular interest to James are works by Munich-educated Frank Duveneck, a deservedly uncelebrated American painter briefly based near Florence, his wife, Elizabeth Boott Duveneck, still more unknown, and Hendrik Christian Andersen, an all but completely unknown Norwegian-American sculptor, many years younger than James, who was based in Rome and to whom James wrote many affectionate letters.

(Though James wrote affectionate letters to both women and men, for the past decade or so the weight of critical opinion seems to be that he was a closeted homosexual, though for decades before then he was merely classified as an inveterate bachelor.

(Just to make sure everybody in creation knows about this latest classification, Holland Cotter, New York Times critic and reigning prince of identity politics, cheerily outed both James and Sargent for the benefit of his online millions of readers in his write-up of this show.

(Flamboyant and social-climbing, Sargent probably wouldn’t have minded – I can see him fitting in very well with Andy Warhol’s egregious celebrity culture – but I wonder how James would have felt?

(He has always struck me as the quintessential Victorian in his respect for the proprieties; even the press release for this show says that he was “fiercely protective of his privacy” and despite his widening renown “gave only four interviews over the course of his career.”)

This exhibition was organized by an Irish novelist named Colm Tóibín who has written a novel about James, and Declan Kiely, head of the Morgan’s department of literary and historical manuscripts.

Their primary rationale for placing such an emphasis on Duveneck, including a version of the huge & excruciatingly pretentious gilded tomb effigy that he created in 1891 for Elizabeth, is that the family (including Elizabeth’s father, a composer who had opposed the match) were the originals upon which James based subsidiary characters in The Portrait of a Lady, and the heroine and her father in Washington Square.

Well, maybe so and maybe no. If you let your fingers do the walking through google, you will find that other authors believe that Isabel Archer, the main character in The Portrait of a Lady, is based on Mary (“Minny”) Temple, James’s first cousin to whom he was deeply attached, and who died tragically of tuberculosis in 1870 at the age of only 24.

Another online author quotes a passage from James’s journal which indicates that the money-hungry suitor who courts the plain but rich young woman in Washington Square was inspired by a situation described to the author by the actress Fanny Kemble, and that the original of the suitor was Kemble’s brother, so that at most the autocratic father in the novella was simply grafted onto another real-life situation.

Still other writers online suggest that one or more of James’s characters find their origins with characters in other novels by lesser authors.

In my opinion, scholars who spend all their time looking for “real” elements in creative works can easily overlook the magic of the creative process.

I think James’s novels, like most truly imaginative novels, probably combine or synthesize many elements from the author’s experience, just as an abstract painting combines and synthesizes many visual experiences that the artist has had.

Thus to emphasize any one source for a novel – or for an abstract painting – is to miss the essence of the work.

NOW, FOR THE FUN

In the tiny, jewel-like Clare Eddy Thaw gallery at the Morgan can be found sixteen precious little objects from the oldest cultures of “the land between the rivers” in a truly enchanting show called “Noah’s Beasts: Sculpted Animals from Ancient Mesopotamia.”

One of these sixteen objects is a fragment of a tablet, dating back to the First Dynasty of Babylon (ca. 1646-1626 BC). It’s the newest object in this show but explains the whole show’s unifying element, as inscribed upon it in cuneiform is a fragment from an Ur-version of the tale of Noah and The Flood.

All (or I like to think at least most) of us know this story from the Bible, but it seems that whoever put together the Bible was really borrowing the story from an earlier civilization, going back how many centuries I can‘t even begin to guess.

As my readers may (or may not) recall, Noah loaded up his ark with two of every species of animal to re-populate the world after the great coming flood had receded. And the rest of this show consists of little freestanding statues of animals of various kinds, and reliefs on little cylinder seals, likewise depicting animals.

Most of these wondrous works are from the Sumerian civilization, which flourished in the southern reaches of the land between the Tigris and Euphrates from about 4500 BC to about 1900 BC – in other words, from the late Stone Age to the Middle Bronze Age.

All of these animal renditions are chockablock with cultic or religious significance. But you don’t have to know about this religion to enjoy them.

Made of gold, silver, copper, black stone, alabaster, lapis lazuli, and other precious stones and metals, the little freestanding animals are sometimes as simple as the animal’s head.

But sometimes they are as complex as the famous “Ram Caught in a Thicket,” which is really a rearing goat interlaced with a flowering plant, symbolizing the mystic union between fauna and flora.

Sometimes these sculptures depict simply the beast, as in the dulcet “Recumbent Sheep,” bold “Head of a Lion” and majestic “Head of a Bull.”

But sometimes they function as part of ritual vessels, as in the graceful “Vessel Stand With Ibex Support,” comical “Kneeling Cow Holding a Vessel,” and placid “Vessel Supported by Two Rams.”

Especially awesome is the “Head of a Markhor Goat.” Made of copper alloy, shell and red stone, it sports a commanding pair of corkscrew horns that would have done credit to Picasso.