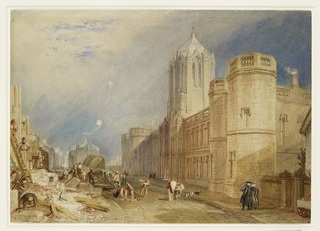 Joseph Mallord William Turner, English, 1775–1851. Christ Church College, Oxford, 1832–33. Watercolour and bodycolour over graphite with scratching out, on paper. The Ashmolean Museum, Oxford. Image © Ashmolean Museum, University of Oxford.
Welcome back, readers! Lots of goodies in town in September, but one out-of-town show must get precedence, since it's closing so soon. It is "Great British Drawings from the Ashmolean Museum" at the Princeton University Art Museum (through September 17). And when that title says "great," it means it!

Included here are more than 100 drawings and watercolors, dating from the 17th to the 20th centuries and loaned by the official museum of Oxford University in the UK. Among the stellar works on display are portraits, landscapes, still lifes, narrative pictures (what used to be called “history painting”), ornamental designs and book illustrations.

In fact, there is such a plethora of wonders that until I started writing this review I didn’t realize that everything in the show was made in the UK and/or by British artists. There is such a range of styles, techniques and subjects that one gets the impression of a rounded, balanced show.

Every phrase of creation is here, from the simplest preliminary graphite sketch to pictures so fully worked up that they can almost pass as finished paintings. Too often, “drawings” means just that: black and white or brown and white renditions, but this show is rich in color as well.

To be sure, if it has a hero, that hero is J. M. W. Turner, who is represented by no fewer than 7 pictures, more than anybody else, and virtually all finished views of landscapes or buildings (the exception here is a study of mackerel).

Two of the finest Turners are views of Oxford itself, and to be more specific, Christ Church, one of the university’s larger colleges. My favorite of the two is the interior view of the spacious great hall, done in the artist’s earlier and more precisely detailed period (1803-04). But some of my readers might prefer the later, mistier view of its castle-like and towering exterior (1832-33).

I confess that being somewhat curmudgeonly, I was irked to see Turner given such prominence, while John Constable, his great rival (and to some of us, his superior) is omitted altogether. But it seems that if you want to see Constable, you should go to Cambridge University’s Fitzwilliam Museum (it’s a lot closer to Constable’s native turf in Suffolk).

After all, the biggest reason that Turner is given the most prominence in this show may be that its presiding genius is that remarkable polymath, John Ruskin (1819-1900).

Ruskin wrote about everything from architecture to the weather, and included politics and geology along the way, but he’s especially known for his voluminous writings on art, in which he championed both Turner and the Pre-Raphaelites -- that curious brotherhood who modeled their art on Quattrocento painting, and rejected the High Renaissance in favor of detailed and literal renditions of myth, landscape, literature, medieval history and religious subjects.

Ruskin seems to have dominated mid-century Oxford’s views on art, having been not only an alumnus but made its first Slade Professor of Fine Art there in 1869; two years later, he founded its Ruskin School of Drawing and Fine Art. His lectures were so popular that each had to be given twice, once for the students and once for the general public.

In his spare time, he managed to teach drawing, sketching and painting in oils to Alice Liddell and her sisters (whose father, in addition to being Dean of Christ Church, was an Oxford classmate of Ruskin’s). In this manner, Ruskin also attained another form of immortality through being satirized by Lewis Carroll as an old conger-eel who taught “Drawling, Stretching and Fainting in Coils” in Wonderland.

Under the circumstances, it’s not surprising that after Turner, the next largest groups of pictures in this show are those made by Pre-Raphaelites. There are 6 entries each for works (or groups of works) by Sir John Everett Millais & Sir Edward Burne-Jones, as well as 5 by Dante-Gabriel Rossetti.

Rossetti’s two major pictures here deal with episodes from the life of his namesake, the medieval Italian poet Dante Alighieri, and resemble medieval manuscripts in their bright colors and claustrophobic compositions; the better of the two is “Dante Drawing an Angel on the Anniversary of Beatrice’s Death" (1853).

Even better (anyway, for nature-lovers) is William Holman Hunt’s “The Sleeping City: The Cemetery of Pera, Constantinople” (1856-88), a fascinating study in verticals and horizontals. As I learned long ago, the Pre-Raphaelites anticipated the impressionists in painting sur le motif (though I can't say for sure that this picture is an example of it).

None of the Millais contributions would I consider major works, but his sketches of fellow artists Hunt and Ford Madox Brown are straightforward and sincere. (It may have been that Ruskin was a little ambivalent where Millais was concerned, since Ruskin’s wife Effie divorced him after he failed to consummate the marriage, and then married Millais instead.)

Ruskin himself, though never a professional artist, is represented by three images, including a Swiss lake scene that owes a lot to Turner, a pleasantly literal view of the Doge’s Palace in Venice (hung right near a Turner of Venice), and a study of feathers from the head and wings of a kingfisher (which combines his interest in art with his interest in natural history and is juxtaposed with the Turner mackerel).

There is, of course, much more here than Ruskin’s obsession with Turner and the Pre-Raphaelites. The exhibition is divided into four sections, beginning in the 17th century, with one called “Likeness and Vision, 1650-1830;” here are combined portraits and fantasy/history pictures.

All of the big names in 18th century portraiture are here, but the specific samples of work by two lesser-known ones stood out more for me. One was a study of an athlete/pugilist named James Figg (1714) by Jonathan Richardson, the other a study of a visiting Chinese artist named Tan-Che-Qua (1771) by Charles Grignion II.

The fantasy/history segment provided a magnificent contrast, too, between horridly evil-looking “Monsters” (ca. 1779) by John Hamilton Mortimer and a serenely eloquent “Baptism of Christ” (ca. 1803) by the mystic poet/painter William Blake.

The third section of the show, although titled “Ruskin and the Pre-Raphaelites: Observation and Imagination,” is hung close to hearty mid-Victorian academic works that celebrate the Pax Britannica with the bright colors of southern climes.

David Wilkie’s “Portrait of Sotiri, Dragoman of Mr. Colquhoun” (1840), shows a figure wearing a red fez and a red robe (a “dragoman” is an interpreter or guide, especially in countries speaking Arab, Turkish or Persian languages).

John Frederick Lewis similarly shows the crisp blue skies over a Middle Eastern stretch of yellow sand in his rendition of “Arabs with Camels by a Tomb in the Desert” (1858).

Mercifully, we are spared the late Victorian fad for saccharine pictures of ladies in mock-Grecian gowns, engaged in 19th century activities like pulling the petals off daisies to find out whether or not “he loves me.”

This style of painting was dubbed “Five O’Clock Tea Antiquity” by Ruskin’s arch-enemy, James Abbott McNeill Whistler. Its prime exponent was Sir Lawrence Alma-Tadema, but only his daughter, Anna Alma-Tadema, is present in this exhibition, with “Girl in a Bonnet with her Head on a Blue Pillow” (1902).

I confess that seeing the name, “Alma-Tadema” on the label, I passed it by rather rapidly, but Cara London, the artist with whom I saw this show, brought my attention back to it by commenting on how skillfully its creator had conveyed the textures of the objects in the picture – gauze, velvet, swan’s feather and silk.

London also was impressed by the “sensitivity” in the later Turners (which I was inclined to discount because I was irked by the lack of Constables); she also induced me to look more carefully at “The Abbey from the Churchyard, Arbroath” (1982) by John Piper in the fourth and last part of the show, which is titled “Change and Conflict: The Modernist Century.”

This picture had put me off at first because of its heavy overlay of colored wiggly lines, but upon more careful study I found it a welcome contribution to the show--if not quite as powerful as David Bomberg’s stark black-and-white charcoal of a war-shattered “Evening in the City of London” (1944).

This section of the show also has two splendid portraits. One is “William Rothenstein” (1917-18) by Eric Henri Kennington, showing a bespectacled British “tommy” in a World War I helmet; the other is a wickedly droll pen-and-ink David Hockney of Henry Geldzahler, the protean Metropolitan Museum curator, called “Henry Writing” (1973).

Undoubtedly, the best part of the show is the second section, entitled “Travel and Topography; the Golden Age of Watercolor Landscapes from 1750 to 1850.” This was a period during which English painting enjoyed (and deservedly) international status.

Most of the Turners are here (including the two of Oxford mentioned earlier) but so too are works by talented figures ranging from Samuel Palmer, Blake’s best-known disciple to the obscure William Turner of Oxford. My favorites were three groups of pictures that somehow belong together, for one or another reason.

The first group consists of three dramatic views of English scenes. One is “A View of the Cascade in the Groves at Ambleside 10 August /78,” by Francis Towne, and two are by John Sell Cottman, “A Ruined House” (ca. 1807-10) and “The Tower of West Walton Church, Norfolk” (ca. 1812).

The range here is remarkable – the Norfolk and Ambleside scenes resemble other pictures of the period, to the extent that their outlines are carefully shaded – but the outlines of the ruined house are so stark that it could have been painted in the 21st century.

The second group – a pair, actually – are but a small sampling of the rich harvest of Italian scenes that peripatetic British artists brought home from their travels. “The Ruins of Selinunte” (ca. 1792), by George Augustus Wallis, shows the ancient Greek city in Sicily, while the atmospheric John Robert Cozens (a favorite of Constable’s) portrays “Vesuvius and Somma from the Mola at Naples” (1782)

Finally, in what is perhaps the most gratifying combo in the entire show are three wonderful landscapes by Thomas Girtin (who was much admired by Turner but died in1802 at the age of only 27). They are “Crowland Abbey, Lincolnshire” (ca. 1793), “Donottar Castle in a Thunderstorm” (ca. 1794), and “The Falls of the Ogwen, North Wales” (ca. 1799-1800).

None of these pictures are very large, but the subjects in all three are seen from a low vantage point, looking up at them. Thus the abbey becomes a towering fairyland, the falls are monumental, and the tiny castle cowers at the top of enormous cliffs while lightning strikes it from above. Magnifique!