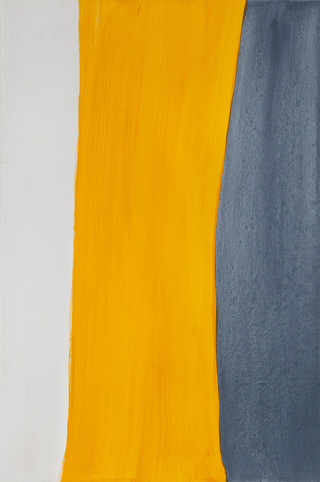 Philip Gerstein, "After the Humans," 2016. Acrylic and mixed media on wood panel, 30 x 20 in.
I am overcome with remorse. Weeks ago, I saw “Philip Gerstein: Sacred Asymmetry” at The Painting Center in Chelsea and liked it a lot. It showed a great deal of care and consideration and was decidedly touching, not least because it marked a radical departure from Gerstein’s last show, which was gestural and even a bit slapdash. Yet here I am, only now reviewing it on its last day! Shame on me! I did have personal reasons for this lateness that I won’t bore you with, but it was also because I had other shows in Chelsea that I wanted to see & mention, too—namely those featuring Maja Lisa Engelhardt at Elizabeth Harris (through December 23), Hassel Smith at Washburn (through December 22), and Neil Williams in “Friends with Pop” at Dean Borghi Fine Art (through November 30). All had their virtues, but I thought Gerstein’s show stood up very well by comparison with any or all of them.

The title of this show is “the seventh day – genesis” and I am coming in late on this sequence: the artist has already had five shows at this gallery dealing with five of the first six days of the narrative that begins the Bible.

I can’t recall these first five shows, but this seventh day is primarily a series of 12 paintings in a brushy, gestural style that is however quite disciplined and hovers between abstraction and a sort of landscape. This reminds me of Ronnie Landfield, in intent if not results.

The Engelhardt show puts me in mind of forest fires, erupting volcanoes, whirlwinds or other natural disasters. The colors are quite nice, though on the dark and brooding side, and the technique looks like oil even though the paintings are in acrylic.

All of these paintings are titled, “The Seventh Day,”’ so I can only indicate my favorites by numbers on the checklist, which are 2, 9 & 10.

This show is subtitled, “The Ferus Years,” and presents a group of abstract paintings done in the 1950s and 1960s by a San Francisco “Bay Area” artist who according to the gallery’s press release was strongly influenced by Clyfford Still.

Smith was born 1915 and died in 2007, which made him technically a contemporary of the first generation of abstract expressionists (Pollock was born in 1912, Motherwell in 2015).

Smith was very active both as a painter and as a teacher on the West Coast, though dividing his time and teaching jobs between California and England in later life, and also reverting to expressionist figuration.

However, he is never classed as a first generation abstract expressionist. The official reason is that he remained throughout most of his career in California, and only had one show in New York – with 1961, with André Emmerich.

However, on the basis of the admittedly small show at Washburn, his paintings are simply not up to that of Still, Newman, Rothko and other founding members of the New York School.

Between 1957 and 1968, the years during which the well-known Ferus Gallery in Los Angeles was in existence, Smith had three shows of recent work there and I would assume the work in them resembled the paintings in this show.

To me these paintings looked like typical second-generation work: gestural and cheerful, somewhat inventive but splashy & not terribly well put together.

Still, I can’t forget Gary Snyder’s lecture on how many people who can’t afford Still or Rothko would rather have a second-generation abstract expressionist on their walls than go out on a limb and invest in any of the newer boys (let alone any of the girls).

At least, the biggest Hassel Smiths at Washburn are bigger than most work by living abstract painters, and some people think a big picture is necessarily better than a small one. Go figure.

NEIL WILLIAMS IN “FRIENDS WITH POP”

At Dean Borghi Fine Art is a show that is called “Friends with Pop.” It is meant to celebrate three “masters of minimalism:” John Chamberlain, Frank Stella & Neil Williams.

All of these artists, so the story goes, hung out together with all the much more famous pop artists to be found at Max’s Kansas City—you know, like Warhol, Lichtenstein, Rauschenberg and so forth.

Thus, it is subtly intimated, if you like pop, you should like the three artists in this show as well.

Up to a point, this premise works. By the time I got to the gallery, all the Chamberlains were no longer on view – either sold or out on spec. Only a couple of Stellas were left: a small one and a rug. But there was a lovely selection of Neil Williams, which is just as well because that is who I’d come to see.

And I’d come to see him because from the work on view at Dean Borghi, it was very obvious that while Williams (1934-1988) had undoubtedly admired Stella, he had also admired Morris Louis and/or Helen Frankenthaler. According to the grapevine, he’d also been friends with Francine Tint and maybe even Larry Poons.

Now, those are all artists whose good opinion impresses me more than any of the pop stars.

On the basis of the work in this show, I can’t say that Williams was the greatest color field painter who ever came up the pike. And as practically everything was “untitled,” and the checklist has no numbers on it, it’s difficult for me to say what I liked best.

But there are two large and very dark stain paintings, done between 1972 and 1974, and hung facing each other on the two side walls of the main gallery, that can obviously trace their lineage clear back to Louis & Frankenthaler.

Half of each picture (divided vertically) is “painterly” and half is “post-painterly” and that makes them look like a commentary on one of the big artistic battles of the early 60s (ab ex v. color field). Hilarious.

Finally, on the wall facing the entrance to the main gallery are three large and brilliantly colored, poured paintings on ever-so-slightly shaped canvases (with the top edge a gentle peak). In an apparent homage to Kenneth Noland, they are all called “Untitled (Chevron).” Also, they are all dated 1970, and they all measure 70 x 106.

BUT TO RETURN TO PHILIP GERSTEIN AT THE PAINTING CENTER

Gerstein’s show at The Painting Center (an artists' cooperative) is to the right of the entryway, in a little “Project” alcove by itself. Here you could find just eleven abstract paintings, almost all done in 2016 but with one done in 2015 and one done earlier this year.

All are modestly scaled: the smallest is 18 x 18, the largest 30 x 40. And all but the earliest toy with minimalism. However, fortunately they are not obsessed by it.

The colors are too soft and too harmonious to satisfy the ideologues who think highly of Agnes Martin & Donald Judd.

And the brushwork is just a little too loose to qualify as minimal, either, being employed as it is on a rich medley of materials: nearly everything is made of oil stick, acrylic, glass beads and mixed media on wood panel.

Although geometry is employed here, and most of these paintings are based on vertical bands of color, the bands may be irregular in width, and are enlivened by rougher texture – caused, I suppose, by the beads and the mixed media but also by the looser brushwork.

The colors, too, are an improvement over Gerstein's last New York show – restrained but quite pure and individual; favorites seem to be white, yellow, gray, pale and muted green. Everything works together quite harmoniously, but not loudly – entices by its subtlety.

And the titles are so much more interesting than “Untitled” or its variants!

Among the paintings that struck me as particularly worthwhile are: “Summer Turns to Gold” with its offbeat diagonals, its pinks and its touches of gray and its band of crystalline green;

“The Wind Carries the Scent,” with four vertical bands, speckled gray and cream in the center and narrower black and orange at the sides;

And finally, the classically simple “After the Humans,” with only three – but irregular – vertical bands: the narrowest (on the left) white, the broadest (in the center) yellow-orange, and on the right, a blueish gray that bells out into the yellow & has more textural interest than the yellow. Fortissimo Grande!

Thank you very much, Piri, for the show so well seen!