CHINA AT THE GUGGENHEIM: POLITICS AS USUAL 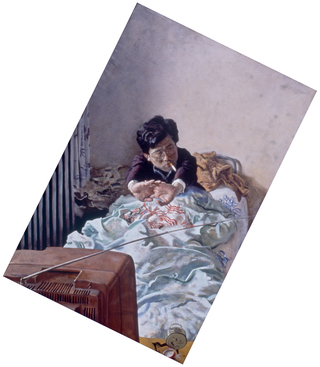 Zhao Bandi, Young Zhang, 1992. Oil on canvas, 214 x 140 cm. Private collection, image courtesy ShangART Gallery, Shanghai.
As I’ve said before, this is a big season for politics in art, and a determined contribution in this department is “Art and China after 1989: Theater of the World” at the Solomon R. Guggenheim Museum (through January 7). At least, it’s meant to be a sociopolitical show.

Both Richard Armstrong, the museum’s director, and Alexandra Monroe, the show’s principal organizer, hammered away at this theme during the media preview, but in my opinion something seems to have gotten lost in translation, because when you look at the art, it’s almost always hard to figure out just what the artist is trying to “say” about politics & society in China.

The show fills not only the ramp at Guggenheim but also most of the “Tower” galleries adjoining.

Still, it is not – as Dr. Monroe reiterated during the media preview – a survey. This turns out to mean that there is a shortage of paintings in general. Specifically banned appear to be those wonderful canvases offering a fantasyland and done in a peerless academic style that I have so enjoyed at successive Armory Shows.

To be included in this show, I gather, the artist must have a “message,” though with practically no exceptions these messages only become clear if you read the labels.

The organizers of the show, of course, would like you to believe that these Chinese artists have come up with something new and wonderfully different, but as I made my way up the ramp, I couldn’t help seeing works that owed more than a little to Western sources.

The show leads off with a conceptual work by Huang Yong Ping consisting of a book on Chinese painting and a book on modern painting that have been reduced to pulp in a washing machine.

This is a clever conceit, but in 1969, the British conceptual artist John Latham took a copy of “Art and Culture” and with the aid of friends chewed it into a pulp (which is now a proud possession of MoMA). So this is really not that new.

In like manner, Xu Tan has created an installation furnished with a sofa, desk, plastic chairs, a floor lamp, a bed, toys and all manner of silent electronic accouterments as well as four color videos with sound…

It’s all very colorful, but I have seen several similar installations before now, and they go back to the granddaddy of them all, the “Bedroom Ensemble” by Claes Oldenburg that was based on a Malibu motel room, premiered at the Sidney Janis Gallery in 1964, and was most recently resurrected, in a replica version, at the Guggenheim’s big Oldenburg show in 1995.

Elsewhere I was able to pick up indebtedness to Larry Rivers, Roy Lichtenstein, and the British pop artist Richard Hamilton (with only the last an overt homage).

If I were more up on Western pomonian artists from the 70s, 80s and 90s, I could likely find more source material, but hey, I think I’ve made my point – which is that everything here looks very familiar in terms of style.

The only novelty is in the subject matter: Chinese faces (and bodies) in the photographs and videos, Chinese spoken on the soundtracks, Chinese newspapers and other printed material in the collages, Chinese objects in the assemblages and installations, and Chinese lettering in the conceptual art.

That said, a small amount of the work is worth looking at.

I was amused by “Uncertain Pleasure II,” by Zhang Peili, which is a 12-screen color video presentation with different individuals on each TV set scratching themselves.

I was also amused by one of the larger installations, a creation of Chen Zhen that consisted of a pagoda-like structure with car parts, TV sets and small figurines of Buddhist deities hung upside down from its frame.

According to the label, this was a commentary on the dichotomies between traditionally ascetic Buddhist values and our modern consumer culture. What an original idea!

I was impressed by the selections of Liu Zheng from his series of photographs called “The Chinese.” They include powerful images of mostly atypical Chinese people, including three country strip teasers, a Muslim drug dealer, a coal miner, an aged opera actor playing a female role and (for a chilling finale) a mass grave.

And the 75-foot-long dragon that curves in mid-air clear across the open space in the center of the museum’s rotunda is also robust and imaginative. Called “Precipitous Parturition,” it is also the handiwork of Chen Zhen, and made of fragments of bicycles, rubber bicycle inner tubes, aluminum & plastic toy cars, metal and acrylic paint.

What little painting there was in this show was for the most part competent, though Zhou Bandi, despite having had academic training, seemed to think that his painting of a childhood friend daydreaming was improved by hanging the canvas at a 45-degree angle. I think it looks rather odd that way.

Then again, as the artist seems to be a card-carrying pomonian, he probably wants it to look odd.

Before this show opened, it ran into difficulties with animal-rights activists because three pieces presented animals in ways deemed exploitative.

One of the pieces was in fact the title piece for the entire show: “Theater of the World,” by Huang Yong Ping, pitted live animals and insects against each other in a large enclosed structure, clearly hoping that the animals would devour the insects.

The other two pieces showed videos of animals in hapless circumstances. One, by Xu Bing, only portrayed pigs copulating, but the one that got the biggest play on our local TV stations was by the artist-team of Sun Yuan & Peng Yu. It showed four pairs of frustrated pit bulls straining to attack each other, but unable to reach each other because they were being held on treadmills.

According to Holland Cotter in the New York Times, more than 750,000 people signed a petition demanding that these works be withdrawn from the show, so the Guggenheim caved in, protesting lamely that it was doing so for the sake of the safety of its staff.

I never thought I would welcome animal-rights activists. They have made a nuisance of themselves here in the Big Apple by trying to get rid of the nice row of horses and carriages that line up just below Central Park and offer rides through the park to tourists.

I think those animals are very well cared for and not overworked and add a nice living touch to the city’s bricks and concrete – but as I say, the effect of animal-rights activists on the show at the Guggenheim was one I could only applaud.

I say this upon the basis of the last exhibition space in “Art and China after 1989,” in the topmost Tower gallery. It was intended to contain only three works and as matters now stand, it contains only two & the shell of a third.

Hanging top and center is “Lifelines I,” a large horizontal black-and-white abstraction by Yang Jiechang (who, like many artists in this show, doesn’t actually live in China).

It’s not a terribly good abstraction, being too heavy on the left and too light on the right. This may be explained by the fact that, according to the label, the artist based his composition upon a diagram that a friend had made of the clashes he’d witnessed in Tiananmen Square in 1989.

In other words, esthetics took second place to politics in his choice of lines and shapes. Still, it was refreshing to see even a not-very-good abstraction (I spotted only one other in the entire show).

Surrounding this painting and running across nearby walls and partitions is a conceptual piece consisting of 38 panels with vertical rows of red lettering on a white field. It is by Gu Dexin and called “2009-05-02.”

I understand that this lettering describes something or other horrible but as I can’t read Chinese it just looks kind of pretty. And the whole gallery was so blessedly quiet!

I hadn’t realized how all those videos on the ramp (together with the crowd) kept the volume up, but here in this one space it was just so peaceful. I didn’t realize why until I strolled over to the third and last object in the space – and saw that it was the stand on which the video of those poor frustrated pit bulls would have been unreeling.

This was to have been the grand climax for which the whole show was intended as a build-up! And it was only thanks to all those animal-rights activists that instead this whole gallery was so blissfully quiet instead.