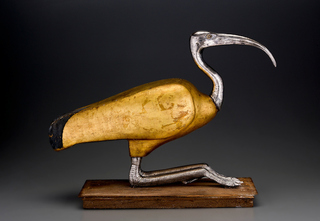 To begin with, it’s delectably quiet – although there is the inevitable video chattering away, it’s outside the exhibition proper, in a lobby at the very back of it.

Most or all of the show itself is chastely enshrined in any number of pristine vitrines and glassed-in wall displays that (on the day I attended, anyway) were being quietly, reverently inspected by an only modest selection of art lovers.

Even though there are about 100 objects in this show (including 30 animal mummies and 70 objects related to the ritual use of animal mummies), all of the works on display are so modestly scaled that the whole exhibition fits very neatly into only four not-very-large galleries (plus the alcove at the end with the video).

The exhibition includes a number of mummies that look like nothing so much as heavily swaddled packages, and also some CT-scans of mummies that are more notable for their desiccated contents that their padded exteriors.

However, the most important part of the show (for me, anyway) is the large percentage of mummy cases & ritual objects that are so ingeniously crafted that they become nothing more than extraordinarily beguiling.

Animals occupied what today would be considered a privileged position in ancient Egypt’s civilization. All these animals were believed to have souls.

Some if not all of them had connections to particular deities, so that after they died, their mummified souls could carry a message to a god.

Some animal mummies are thought to have been those of pets, some a form of food placed in a tomb to provide sustenance for the human mummy in the same tomb.

Some were considered divine in their own right, and some served as sacred offerings believed to communicate directly with a deity.

Is it any wonder, then, that archaeologists over the past century or two have recovered millions of mummified birds, cats, dogs, snakes and other animal mummies from at least 31 different Egyptian cemeteries?

And, although everything in this show comes from the Brooklyn Museum’s permanent collection, generations of curators have obviously made very enlightened selections in assembling that collection.

Nominally, the work on display runs from as early as 3000 BCE until the Roman period at the end of the second century CE. However, a large percentage of the show comes from later rather than earlier periods.

Some of it even pays tribute to the remarkable staying power of ancient Egyptian beliefs on into centuries when the country was ruled by Greeks and Romans, as well as being infiltrated by those proselytizing Christians.

I saw so many dazzling little objects in this show that I can’t begin to describe them all.

At the entry there is a gutsy lean and big-eared dog, made of painted wood and coming from Saqqara (664-30 BCE). This is Anubis, god of cemeteries and embalming, who was usually represented as a canine.

In the first gallery, there is a curious bust of Serapis—this being a Graeco-Egyptian god who combined Zeus with two Egyptian gods (one of them was Apis, a bull).

Created between 30 BCE and 395 CE, this marble bust is rendered with a human face but animal horns and ears and may have been collected not in Egypt but in Greece.

Cats? There are so many kitty mummies and coffins that an ailurophile should go wild with delight.

One case has a row of full-sized wood sculptures of seated cats on top of little boxes wherein presumably the animal’s remains are hidden, but my favorites were the two little long narrow coffins with cats’ heads sticking up from one end of them – one little coffin with one cat’s head at the end, and the other with the heads of two kittens.

But that’s not all. I saw fish (including one tilapia), a likeable dog mummy, a bronze statue of Wepwawet (an Egyptian war god, rendered as a wolf), a lovely limestone rendition of mating hippopotami, a painted sandstone Meretseger (Theban deity depicted as a cobra or a cobra with a woman’s head), and…well, maybe you get the idea.

Everything is small, and most of it is very small: a large part of its appeal for me.

There’s a linen baboon appliqué, a coffin with a little shrew on top, snakes, crocodiles and oh yes, bird life, especially many tributes to the ibis---this being the bird sacred to Thoth, god of the moon, magic and writing.

At the conclusion is perhaps the most striking piece, a quite large & shining ibis coffin, made of wood, silver, gold and rock crystal (plus of course animal remains and linen).

True, its long silver legs and beak may (according to the label) be later additions, but I can live with that. It’s a fitting conclusion to a most remarkable show.

“Soulful Creatures” was organized by the Brooklyn Museum’s Edward Bleiberg, with the aid of its Yekaterina Barbash.