JIMMIE DURHAM AT THE WHITNEY; AMADEO MODIGLIANI AT THE JEWISH MUSEUM 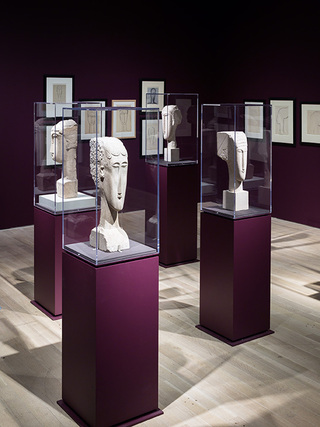 Installation view of the exhibition Modigliani Unmasked. September 15, 2017 – February 4, 2018. The Jewish Museum, NY. Photo: Jason Mandella.
I don’t have a lot to say about “Jimmie Durham: At the Center of the World,” at the Whitney Museum of American Art (through January 28). Therefore I shall just fold my discussion of it into my review of a show whose sheer beauty led me to linger at it a lot longer, “Modigliani Unmasked” at The Jewish Museum (February 4). Both artists are or were outsiders within their respective time frames, though what this meant for their careers varied.

Modigliani (1884-1920) was fond of identifying himself as a Jew but that wasn’t an advantage in France in the wake of the Dreyfus Affair. Durham (b. 1940) may or may not be a Cherokee (it seems to depend on how you define “Cherokee”) but he began his professional career as an activist on behalf of indigenous peoples and Native Americans.

And (although Modigliani never needed to trade on his ethnic identity in order to win artistic recognition) speakers at both of the media previews congratulated themselves on the “relevance” of their exhibitions.

This is a very cheerful, nostalgic show, reminiscent of the Manhattan art scene of the later 1950s and early 1960s (although Durham, who grew up in the southwest U.S., didn’t get to the New York until the 1980s, and has racketed around different parts of the globe in the decades both before & since).

The artist’s forte is assemblage (when it’s freestanding) and I suppose you could call it collage (when it hangs on a wall)—anyway a mélange of many different pieces, some of which have been taken from mass-media culture and some of which are just scraps of wood, strips or segments of canvas and miscellaneous detritus.

In all of this, I am reminded very much of artists like Robert Rauschenberg, Jasper Johns, Larry Rivers, George Segal, Claes Oldenburg, Marisol & Edward Kienholz—in a word, that whole jolly generation of mixed-media talents which was known as “neo-dada” in the later 1950s.

This movement was only re-christened “pop” around 1962, when Andy Warhol, Roy Lichtenstein, & James Rosenquist burst together almost simultaneously into the public eye – and, being all three of them painters – necessitated a redefinition of the whole phenomenon.

Durham’s habit of scribbling messages on his work reminded me especially of Rivers, while his little statues of kinds of food was right out of Oldenburg’s “Store.” I was most taken by the group of bedizened & very narrow, vaguely human wooden stick figures arranged by the museum in a triangular composition that reminded me of the 1956 “Bathers” of Pablo Picasso.

And I could see exactly why the Whitney considers Durham so “relevant” and chose to honor him with a full-dress retrospective from the 1986 “Self-Portrait” which it owns and accords a place of honor in this show.

A tall, narrow tan figure cut out of canvas and tacked to the wall, it has a painted mask for a face, beads for eyes, shells for ears, a lot of little messages written all over its naked body and the brightly-colored, protruding cast of a penis – accompanied by this written message: “Indian penises are unusually large and colorful.”

“Jimmie Durham: At the Center of the World,” was organized by the Hammer Museum in Los Angeles, and also appeared at the Walker Art Center in Minneapolis before opening in New York.

We are so lucky here in New York: in addition to Jimmie Durham, we also get Modigliani (eat your heart out, Minneapolis).

While the emphasis at the Jewish Museum, this time around, is on 130 of Modigliani’s mostly youthful drawings and not his paintings or sculpture, there are 12 paintings and 7 sculptures by him here, too, to keep the exhibition as a whole from becoming dry or academic.

On top of Modigliani’s work, we are also treated to selected examples of African, Asian, Greek, Egyptian and Khmer art – all of which Modigliani, as a young man in Paris, admired and was influenced by.

The result, as organized by the museum’s Mason Klein, is a most harmonious and illuminating presentation.

Except for the drawings of those intriguingly chunky “caryatids”, which occupy the fifth and final gallery of this very comprehensive show, virtually all the drawings here come originally from the collection of Dr. Paul Alexandre (1881-1968).

This physician was still in his twenties when he met the artist around 1907, shortly after the artist, three years younger, had arrived in Paris from his cosmopolitan Italian home.

Dr. Alexandre was deeply impressed by Modigliani’s talents, and they became fast friends; the physician also acquired in all about 450 drawings from the artist, as well as commissioning portraits by him.

The first gallery of this exhibition introduces us to Dr. Alexandre through a handful of Modigliani’s drawings of him & an unfinished oil portrait of him. Also here are other early subjects of the artist, including portraits of other people, ballerina-like Columbines and other theatrical folk.

Skillfully done, they have yet to acquire the long slender faces and other stylistic characteristics that would render them identifiably Modigliani, except for the final drawing of Dr. Alexandre, dated 1913.

The next two galleries, both small, deal with the artist’s struggle to create work inspired by two different women.

The first subject, finally commemorated in a painting called “The Amazon,” was the lover of Dr. Alexandre’s younger brother (she didn’t like the painting and refused to buy it).

The second subject was the Russian poet Anna Akmatova (1889-1966). She arrived in Paris on her first honeymoon, met Modigliani and was so impressed by him that she returned alone a year or so later.

In this gallery, we see a number of studies of nudes, both seated and lying down -- all done around 1911, and beginning to be endowed with the long, elegantly narrow body types that we associate with the mature Modigliani.

The opening of the fourth and largest gallery is my favorite part of the show: with work done between 1911 and 1913 it combines five sculptures in separate vitrines with 29 drawings of the same subject: those exquisitely long, narrow heads, with their prolonged aristocratic noses, tiny mouths and slits for eyes.

The lenders of the sculptures are like an honor roll of top American museums (one each from the Met, the Guggenheim, the Hirshhorn, the National Gallery and the Philadelphia Museum of Art).

The drawings, of course, are virtually all from the Alexandre family archives, and --even though they are pretty much impossible to reproduce here -- they are if possible more absorbing than the sculptures.

This is because although they may lack some or all of their facial features, they also play around with the basic configuration in tantalizingly fresh & experimental ways.

At the other end of this gallery, we get a row of four handsome oil portraits, done between 1915 and 1917 and sharing fully the artist’s mature style.

This is combined with 23 drawings of voluptuous yet ethereal nudes, done sometime between 1908 and 1911, but clearly anticipating the paintings of nudes done in the artist’s final years.

Too bad we couldn’t have had at least one of those paintings for comparison, but I suppose one had to stop somewhere and again the very widely varied drawings offer fertile ground for comparisons.

In the fifth and last gallery, in addition to the caryatids, are also hung three very late portraits, done in 1918 and 1919. One depicts Jeanne Hébuterne in a yellow sweater.

She was the artist’s 21-year-old model and common-law wife who threw herself out a window, killing herself and her unborn child, after Modigliani died of tuberculosis meningitis (complicated by substance abuse) at the age of 35 in January 1920.

What a waste for these two beautiful people to die so young! The exhibition closes with the plaster death mask of Modigliani created by fellow émigré Jacques Lipschitz.