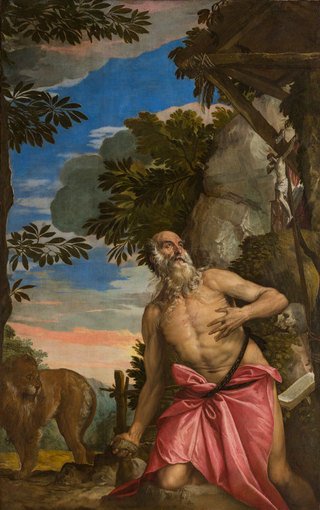 Paolo Veronese (1528–1588), St. Jerome in the Wilderness, 1566–67. Oil on canvas, 91 × 57 1/4 inches. San Pietro Martire, Murano. Photo: Ufficio Beni Culturali del Patriarcato di Venezia.
The baroque Spanish painter Bartolomé Esteban Murillo (1617-1682) is best known for his rather sappy renditions of the Immaculate Conception of the Virgin Mary, while Venice’s Paolo Veronese (1528-1588) may be best known for his lush Renaissance allegories with humanistic overtones. Yet in two small but peerless exhibitions at The Frick Collection, we may view radically different selections from their oeuvre. One show is “Murillo: The Self–Portraits” (through February 11); the other is “Veronese in Murano: Two Venetian Renaissance Masterpieces Restored” (through March 11).

I confess, I had to be more or less dragged to the media preview for the Murillo show, and was only persuaded to go by the information that the Veronese paintings would also be on view. But am I glad that I went!

The talk given there by the Frick’s Xavier F. Salomon, who with Letizia Treves of the National Gallery in London organized the show, gave me a whole new way of looking at Murillo.

(After its close at the Frick, the Murillo show will travel to the National Gallery in London from February 28 to May 21).

To begin with, I am only rarely overwhelmed by portraits, especially, self-portraits of people who don’t already interest me, and the advance publicity for this show suggested that it would be built around just two self-portraits, plus a lot of prints.

Murillo was born and spent most of his life in Seville, which was big & prosperous in those days, and also gave 17th-century Spain the painters Velázquez & Zurburán.

But both of them moved on to the capital city of Madrid, leaving Murillo to enjoy the many lucrative religious commissions in Seville (he did make it to Madrid eventually, and was profoundly influenced by the Rubenses & Titians that he saw in the royal collections, but nevertheless came home to Seville)..

Furthermore, there is a painting of a peasant boy, leaning on a sill, and one of two women at a window who could be prostitutes (the picture may refer to a Spanish proverb: “la mujer ventanera, uva de la calle,” meaning “a woman at the window, a grape of the street”).

Only two self-portraits of Murillo are known to exist, the two in this show.

One was done between 1650 and 1655, when the artist was still quite a young man, and shows him to be quite the dandy.

The other was done about 1570, when he was in his fifties and had lost not only his wife, but also five of his nine children. In this one he looks tired and older.

The Frick only acquired the first in 2014, after it had been in the Frick family collections for decades, though for a long time before then it was the better-known of the two, having been widely reproduced and hung between 1838 and 1849 in the Louvre’s “Galerie Espagnole” during the July Monarchy of Louis Philippe.

The National Gallery owns the second self-portrait, having bought it in 1953, and for that reason among others it is currently more famous.

I wish I could repeat the clear & descriptive tour of the show that Curator Salomon gave us, but I was only able to scribble down some of his more important points.

Most notably, he pointed out the ingenious framing elements used in the self-portraits -- especially where the artist made it appear as though his image was emerging from a granite block .

Equally characteristic and ingenious is the trompe l’oeil device of having one of his hands appear to emerge from this painted frame in the second self-portrait, the peasant boy appear to lean over his sill, and the two women to lean out of their window.

The tour also skillfully interwove Murillo’s paintings and the engravings and other works on paper by other artists, showing how Murillo copied elements from them or how the other artists copied and/or embellished his image.

All of this exposition, as I say, helped a great deal to cast Murillo in an entirely new light for me but I should also say that the paintings themselves were the real proof of the pudding.

I still can’t see that he quite measures up to Velázquez or Zurburán, but there is an essential warmth, flair, somberness and dignity about this purely sectarian work that I hadn’t hitherto been aware of – and that I welcomed very much.

Perhaps we can agree that a show like this constitutes the nicest sort of birthday present he could get.

In addition to the Murillo exhibition, which appears in the Frick’s downstairs galleries, the museum has also turned over its Oval Gallery on the main floor to these two magnificent and profoundly religious paintings by Veronese.

Being a sucker for Venetian color, I don’t need to be told that Veronese was great, but I can’t think offhand of any or anyway many of his religious paintings that I’ve seen.

Yet both of these two paintings were made originally for a chapel on Murano, which is a series of small islands, linked by bridges, in the Venetian lagoon about a mile north of the main city of Venice.

Today Murano is known mainly for its glass studios and shops but back in the Renaissance, it was home to a convent of the Augustinian nuns of Santa Maria degli Angeli.

They seem to have a swinging order, and included many daughters of rich families who didn’t wear habits. So the story goes, in the 18th century, one of them even had an affair with that notorious lover, Casanova!

But anyway, in 1566 their chaplain, a priest named Francesco degli Arbori, was given a plot of land in their cemetery, and he used it to construct a private chapel dedicated to St. Jerome.

It was for this chapel that the two paintings now at the Frick were commissioned.

The taller and more commanding one, a 7½ -foot high vertical entitled “St. Jerome in the Wilderness,” hung originally over the altar, and at the Frick occupies the more conspicuous spot, facing the Garden Court.

The shorter and wider, a 6¾ -foot wide horizontal devoted to “St. Agatha Visited in Prison by St. Peter,” hangs opposite the “St. Jerome,” and to the left of the entry from the Garden Court into the Oval Gallery.

St. Jerome, a 4th century saint known primarily for having translated the Bible into Latin, was a popular subject, and had been pictured many times before Veronese got around to him.

But St. Agatha was a very offbeat choice. A 3rd century martyr, she had had her breasts cut off by a Roman consul who had desired her and been rebuffed, but after she had been thrown into prison she had been visited by St. Peter.

At the media preview, Curator Salomon speculated that perhaps the parents of Degli Arbori had been named Agatha and Jerome.

Over the centuries, these paintings have been relocated several times—most recently to a Dominican church on Murano, San Pietro Martiri (in the early 19th century, all the monasteries and convents – including that of Santa Maria degli Angeli – were suppressed).

But this is the first time in their 450 years that that these paintings have come to America, and the first time the St. Agatha has ever left Murano (the St. Jerome has been shown outside Murano only once, in 1939 at a Veronese exhibition in Venice).

Freshly cleaned and restored, they make a beautiful sight, with their glowing reds and blues, but especially the St. Jerome, with his golden flesh, and a red robe falling away from him.

The sky behind him shades up from pink to blue behind rich deep green trees. He is seen in an arid setting, as he was an ascetic who spent much time in the desert, and besides open books, an hour glass and a crucifix, he shares his space with a lion.

Along with the books (an allusion to his Bible translation), the lion was St. Jerome’s commonest attribute, seen in picture after picture of him.

The story goes that he tamed one by extracting a thorn from its paw -- and if this reminds a good Shavian like myself of the earlier story of Androcles and the lion, does it really matter all that much?