IL DIVINO AT THE MET 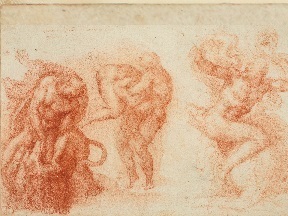 Michelangelo Buonarroti (Italian, Caprese 1475–1564 Rome), Three Labours of Hercules, 1530–33. Drawing, red chalk; 10 11/16 x 16 5/8 in. (27.2 x 42.2 cm). ROYAL COLLECTION TRUST / © HER MAJESTY QUEEN ELIZABETH II 2017, www.royalcollection.org.uk.
Everybody today, it seems, knows who was Michelangelo Buonarotti (1475-1564)…..painter, sculptor, architect, poet, and with Leonardo da Vinci, one of the two greatest artists of the Italian Renaissance. So it should come as no surprise that this season's blockbuster exhibition at The Metropolitan Museum of Art should be "Michelangelo: Divine Draftsman and Designer" and that it should be packing in the crowds.. The show has already been seen by more than half a million visitors, and on its final day (Monday, February 12), it (but not the rest of the museum) will be open until 9 pm.

However, Michelangelo was not always accorded such high honor. Until the end of the 18th century, the sweet reasonableness of Raphael Sanzio was considered the acme of Renaissance beauty, and the emotional intensity, otherwise known as the terribilità, of Michelangelo, caused him to be ranked only second.

Then came the decline in status of pure reason and the corresponding elevation of emotion in the pre-Romantic era: you can trace the change in the intellectual climate through the “Discourses” of Sir Joshua Reynolds.

As president of the Royal Academy of Arts in London, he delivered an annual speech to its students on prize-giving day. In his fifth speech or “discourse,” delivered in 1772, he compared Raphael with Michelangelo, and said that Raphael “stands in general foremost of the first painters,” nor did he disagree.

Yet by his fifteenth (and final) discourse, delivered in 1790, he praised Michelangelo as “this exalted founder and father of modern art,” urged the students to study him, and concluded by saying, “I should desire that the last words which I should pronounce in this Academy and from this place might be the name of Michael Angelo.”

So what happens when The Metropolitan Museum of Art wants to do a show on this founder and father of modern art? Obviously, neither the frescoes in the Sistine Chapel, nor any of the artist’s most famous sculptures, from “David” and “Moses” to the four times of day in the Medici Chapel, will travel from Italy.

Still, an extremely coherent and in its way uniquely illuminating & unforgettable show of about 200 works of Renaissance art, including 133 Michelangelo drawings, could be and has been brought together.

They come from 50 public and private collections all over Europe and the U.S., from the Getty in California to the Albertina in Vienna, and from Vatican City and the Uffizi in Florence to the Royal Collection of Her Majesty Queen Elizabeth II at Windsor.

After all, Michelangelo’s home base was Florence, and Florence was famous for its mastery of disegno or drawing – as opposed to Venice, which was the capital of colore or color, disegno e colore being the two essential ingredients in great painting.

Michelangelo in his lifetime was already known to his admirers as Il Divino, not least for his mastery of disegno, both in the sense of “drawing” and in the other sense with which the word was also used, to designate “design” or composition.

Somehow when a major museum attempts to offer un hommage to one of the greatest artists that the world has ever known, it brings out the urge to carp in some people.

Specifically, a friend of mine who visited the show recently complained that most of the drawings only showed parts of the body – arms, legs and so forth – and that this was all there was, except architectural drawings.

Another person at the gathering where my friend said this remarked in response that he had heard something of the same thing, too.

I had already seen the show at the media preview, and I hadn’t had that impression, but just to be sure, I went back and through the entire show again, to find out whether or not this complaint had any validity. It doesn’t.

Sure, there are a lot of studies of portions of anatomy, but there are also plenty of complete figures, not only singly but -- for example --in triplicate, for example in the fascinating study of three groups of gnarled and struggling figures entitled "Three Labours of Hercules" that I am reproducing to illustrate this review (the title is spelled "Labours" because the drawing has been loaned by H. M. Queen Elizabeth II).

In fact, the only place where portions of the anatomy appeared to me to dominate was in the area where a series of drawings are arrayed beneath a large back-lit photograph of the Sistine Chapel ceiling hung from, and parallel to, the museum’s ceiling.

And even here, at least one of the drawings has a special claim to inclusion. It is the preliminary drawing for what is probably the most famous hand in art history, the hand of God in the center of the Sistine Chapel ceiling, reaching out to touch the hand of the newly-created Adam and bring him to life.

The other is only half of the final area, where an attempt is made to present Michelangelo’s designs for buildings in Rome, most particularly his designs for St. Peter’s, mother church of Roman Catholicism.

Michelangelo conceived his St. Peter’s in the form of an enormous Greek cross (with a nave only as long as the transepts and choir), but far larger than the Roman cross (with its elongated nave) that was designed by successor architects and eventually built.

Michelangelo’s stately plan and elevations – showing the huge dome that would be adopted by his successor architects -- are presented here only as engravings by Étienne Du Pérac.

On the other hand, there are also very few areas where Michelangelo’s drawings form the only display. Far commoner are places that combine his drawings with those of other artists—and always this is entertaining.

In the beginning, we see those artists who influenced the young Michelangelo and provided the inspiration for his unique synthesis. They offer a wide range of styles.

This part of the show includes the stately Quattrocento grace of Domenico Ghirlandaio, to whom Michelangelo was apprenticed (and from whom he learned his fresco technique).

But we also see the grotesquerie of Martin Schongauer, the German artist whose engraving of “The Tribulations of St. Anthony” the budding Florentine turned into a lively tempera-and-oil copy.

Later on, we see Michelangelo’s drawings compared and contrasted with those of his students, workshops and collaborators.

The main purpose this display serves (for me) is to provide an exercise in connoisseurship: viewers can amuse themselves by trying to pick out the Michelangelo drawings from among the others without looking at the labels.

When you do this, you will be better able to appreciate the extraordinary proficiency of the master. Really, none of his pupils or collaborators comes close to the master, though the Venetian Sebastiano del Piombo comes closer than any of the others.

At the end, there is a “heritage” area, one of the smaller parts of the show. So titanic was Michelangelo’s genius that he overwhelmed all possible successors: the best indications of the shadow he cast are the portrait busts made of him.

Still, there are so many diversions along the way of this artist’s long saga that museum-goers should find much to entertain them -- not least the trenchant studies for the never-completed fresco of “The Battle of Cascina” and a wealth of younger and older Madonnas.

Particularly memorable is the lovely and fully-finished portrait head of Andrea Quaratesi, a scion of a Florentine banking family that is said to have protected the artist from political flak.

Nor can I leave this brief tour of the show’s attractions without mentioning the entertaining little copy by Marcello Venusti of the Sistine Chapel’s “Last Judgment” that was made in 1549 -- before a prudish Counter-Reformation pope insisted on having clothing added to all of Michelangelo’s flocks of classical nude souls rising from the dead.

(I have been told that the recent and highly controversial cleaning of the frescoes in the Sistine Chapel took off those clothes, but may have also taken off something more vital in the process.

One art-lover who like me studied at Columbia's graduate school of art history in the 70s recently confided to me that these nudes now look more as though Raphael had painted them than Michelangelo.

Sweet reason as opposed to terribilità? Let us all hope there is no truth to this frightening rumor. )