AND RIGHT NEXT DOOR, DAVID HOCKNEY 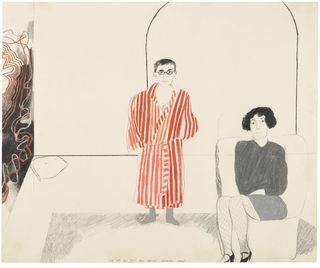 Museum-goers up to a change in pace from the divine to the merely worldly can find lighter, cheerier sustenance at The Metropolitan Museum of Art by walking down the hall from Michelangelo to “David Hockney” (through February 25). This show of about 70 paintings, collages, drawings and photography by an internationally-known 80-year-old Yorkshire-born enfant terrible comes to the U.S. after a triumphal tour through the Tate in London and the Centre Pompidou in Paris.

Whether this exhibition will be to everybody’s taste in the Big Apple I can’t guarantee. Being myself a committed Anglophile, I may find it easier to relate to a Brit than Yanks who normally give Blighty a wide berth.

However, crowds of critics with their i-phones at the ready and the sort of photographers who still stand their cameras on high tripods (TV, maybe?) turned out to welcome the artist himself at the Met’s media preview. It was truly a gala affair.

Admittedly, Hockney isn’t a color-field abstractionist. Instead, he made his name as one of the chief ornaments of Swinging Sixties British pop. And you know me – I’m as a rule not an admirer of pop.

But from his first solo exhibition, in 1963 in London, Hockney has long been represented by members of the Kasmin family, starting with John (“Kas”) Kasmin, who (in addition to staging Hockney shows) did exhibit a lot of American color-field painting at his gallery in London in the 60s and 70s.

Paul Kasmin, John’s son, has been carrying on this admirable family tradition, but to coincide with the Met's Hockney show, he staged the immensely likeable “David Hockney: Works on Paper, 1961-2009” at one of his three venues in Chelsea (closed January 13).

Featured in both exhibitions are a number of portraits of “Kas” Kasmin, mostly drawings but including one (at the Met) of him in one side of a double bed. This may -- or may not -- be one of the closer artist/dealer relationships in art history, but whatever it was, the dealer’s entire family appears to have been the beneficiaries of it.

Featured in the Paul Kasmin show are a drawing of “Kas” with his wife Jane, and a drawing of Paul himself as a child—both originally gifts from the artist to his subjects.

The affectionate double portrait of Mr. and Mrs. Kasmin, done in 1965, is of particular interest because it adumbrates and foreshadows the larger and more formal paintings of paired individuals from the later 60s and the 70s that are such a highlight of the Met's exhibition.

Over on the left side of this lively drawing is what looks like the corner of a painting, but is it a Hockney -- or is it, perhaps, a Noland? During this period, these two widely disparate artists seem to have been friends, so the viewer is left to draw her or his own conclusions....

When I went over to live in London in 1969 for a couple of years, I was given an introduction to “Kas” Kasmin by Clement Greenberg. As a result I was put on the Kasmin Gallery’s mailing list, and invited to all its “private views” (as openings are called in England).

I hope Kas doesn’t regret putting me on that list, as I had some very pleasant evenings because of it, and a very dim memory of having once met Hockney, through some event that Kas had staged.

Could it have been some sort of scavenger hunt or treasure hunt? I seem to see Hockney, standing on a London street corner with a few other people on a chilly winter night, looking very handsome and young – almost boyish-looking, in fact.

This may be why I still think of him as an enfant terrible—and the opening gallery of the show at the Met doesn’t dispel this association.

It’s undergraduate work from the very early 60s, when the artist was a student at the Royal College of Art.

He seems to have been trying to combine a gestural style, such as may have been practiced by British as well as American abstract artists in the 50s, with the neo-dada obsession with commercial culture that was already gaining ground in the UK.

1956, in fact, had been the year that “pop” was born in London, in the form of “This Is Now.” This exhibition ( at the Whitechapel Gallery) had established Richard Hamilton & Eduardo Paolozzi as the leaders of a group of artists fascinated by advertising, commercial design, and other manifestations of popular culture.

The name “pop” to describe this school of art came from a Hamilton collage of a cartoon-like domestic interior used for the show’s catalog cover & its poster.

It featured a muscle man (like the hero of those old Charles Atlas ads) holding a huge lollipop like a dumbbell with a big “pop” lettered on its wrapping.

Six years later, when Warhol, Lichtenstein & rest of their merry crew would become a stop-the-presses phenomenon in America, British émigré critic Lawrence Alloway would apply “pop” to the American phenomenon too.

Hockney’s hybrid student work is therefore notable less for any stylistic trailblazing than for its exuberant flaunting of his gay identity – though, to be sure, such subject matter was far more controversial then than it would be now, as even homosexual acts in private between consenting adults were still illegal in England.

The second gallery of the show was for me much more interesting, being typical of the kind of British pop that surfaced in the 60s with a whole wave of gifted younger artists.

Among these younger pop artists were Peter Blake, Allen Jones & Patrick Caulfield. In general, their style was lighter and wittier than that of Warhol or Lichtenstein, whose work by comparison looks heavy-handed and sensationalist.

These younger British pop artists appeared in some of the same group exhibitions as younger abstractionists like Bridget Riley & John Hoyland, most notably “The New Generation: 1964”, also held at the Whitechapel Gallery.

And between these young British pop artists and their abstract contemporaries, there is even a comparable concern with formal & what I might call painterly values.

I found Hockney’s paintings in this second gallery lively, well-balanced and interesting, with a complex mix of figuration, cubist organization and floating forms.

This was especially true of some of those paintings inspired by the first trips that he was beginning to make to the western U.S., for example “Arizona” (1964) and “Rocky Mountains and Tired Indians” (1965)..

Still, it’s the third and fourth galleries of this show that really justify the artist’s claim to fame; they also establish him as a true Anglo-American artist, with a style that maybe situates him in mid-Atlantic.

In the early months of 1964, he settled to Southern California, and ever since, it seems, has shuttled back and forth between England and the U.S.

The first of these two galleries sums up all the sights of Southern California that he found so irresistible.

We also have the warmth that allows a young man to lie face down, half-clad on his bed, and the soaring, clean lines of newly-built, ultra-modern office buildings.

Above all, we have the brilliant sunshine drenching everything – so different from the moist and cloudy climate of Hockney's birthplace.

These scenes are all rendered in a similarly clean, simple and non-committal form of representation that has more to do with Matisse than it does with advertisements or package designs.

In this gallery may also be found the serene 1972 painting of jonquils in a little vase before a window opening out to give a view of Mount Fuji.

It’s owned by the Met, and according to the museum’s director at the media preview, provides the museum’s gift stores with their best-selling reproduction.

The second of these galleries is if possible even more impressive, for here are arrayed the five stately and near life-size portraits of couples that occupied Hockney between 1968 and 1977.

These paintings are very carefully and almost ritualistically composed, with the subjects seen in or in front of their homes, posed formally and again rendered in that clean, clear, completely dispassionate and unmannered style.

Some of them were done in Los Angeles and some in London. The series begins with the English writer Christopher Isherwood and his companion, the painter Don Bachardy (1968); they were neighbors of the artist in Los Angeles.

The designers Ossie Clark and his wife Celia Birtwell were fixtures on the London scene, and are posed with their white cat, Percy. This 1970-71portrait was planned in honor of the subjects’ marriage but took nine months for the artist to complete.

Other subjects include Henry Geldzahler, then curator of contemporary art at the Met, and his boyfriend, the artist Christopher Scott (1968-69—painted in London though based on sketches done in New York); the California collectors Fred & Marcia Weisman (1968), and the artist’s parents (1977).

This gallery has a bench in it and the bench was fully occupied when I revisited the show; with additional museum-goers strolling about. I guess there is something about pictures of people that attracts lots of people.

The fifth gallery at the Met starts off with a luscious line of Hockney drawings, but they were the last part of this show I could relate to.

There are two or three more galleries of later and sometimes more experimental work, but I just couldn’t get into it.

I wouldn’t dismiss everything Hockney did after 1977 – it may partly have been that the organizers omitted later works that I would have liked better.

I was mildly attracted by some of the paintings in a Hockney show at Pace that I saw six or seven years ago: they were landscapes done on the artist’s native turf of Yorkshire, but whatever it was that I liked about that show doesn’t seem to be in this museum show.

I will say that there were four charcoal landscape drawings done in 2008-2009 at Paul Kasmin. Three of them, showing bare trees and timber, are dynamite. Why couldn’t they have been at the Met?