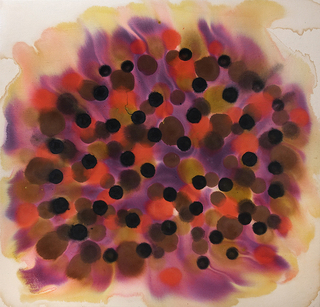 Kenneth Victor Young (1933-2017), Untitled, circa 1972. Acrylic on canvas, 54 1/4 x 54 inches (HTC14748). Courtesy Hollis Taggart Galleries
From the fact that Yares now features Thomas Downing and Gene Davis, though neither of these Washington Color School painters ever made it to Clement Greenberg’s “preferred” list, I deduce that the market may be getting tight in those painters who were on that list. But Downing and Davis were not the only members of that school, and Hollis Taggart recently (closed February 8) showed off five untitled canvases by a third, Kenneth Victor Young, as part of an “Inventory Show.”

Kenneth Young (1933-2017) was born in Louisville, Kentucky, the same year as Sam Gilliam, and met Gilliam when he was studying at the University of Louisville, though his studies at that point were directed primarily at physics and design.

After serving in the Navy and working in a DuPont gunpowder factory in Louisville, he moved to Washington DC in 1964, and initially crashed with his old friend Gilliam.

He also landed work as an exhibits designer at the Smithsonian and for the United States Information Agency, a Cold War government entity devoted to counteracting anti-American communist propaganda.

The USIA was best known for its Voice of America radio broadcasts, but also seems to have staged exhibitions overseas – with Young’s aid, and to the benefit of his artistic education.

He doesn’t seem to have developed a mature and independent style, though, until the late 1960s, well after Noland had moved north and Louis had died.

Still, he was given a solo exhibition at the Corcoran Gallery of Art in 1973, exhibited in galleries and museums through the early 1990s, and – according to Hollis Taggart -- will be given solo exhibitions at the University of Maryland later this year and the America University Museum in 2019.

Of the five Young paintings on exhibit at Hollis Taggart, I found three in particular real winners (by me, this is a very good batting average). All dated from between ca.1968 to 1972; they ranged in size from approximately 3½ feet square to approximately 5 feet square.

Young’s technique (during this period anyway) was to paint wet on wet, resulting in hazy fields of color that bleed into each other.

It’s yet another variant on Frankenthaler’s stain painting; at the same time, all the paintings on view at Hollis Taggart consisted of panoplies of round little dots, unlike anything she ever made.

One could say that they are not unrelated to the early “coin-dot” paintings of Larry Poons – or to the series of dots for which Thomas Downing is also known -- except that with Young, these dots very gracefully -- and uniquely -- bleed into the color that surrounds them. The result is a still-fresh concatenation of hues.