FUN & GAMES IN THE GALLERIES 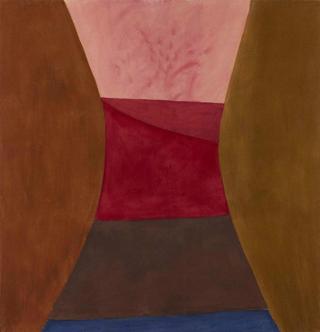 South Dakota-born Ray Parker (1922-1990) has been known to me since the later 1960s, when I was working for Time and doing stories on the Hunter College art department, which was then chaired by Eugene C. Goossen (1920-1997) and featured Tony Smith as its star faculty member.

Parker was another one of the militantly minimal artists whom Gene had recruited for his faculty. As a group, they were much admired (by me among others) during that period.

I am also moderately familiar with the kind of paintings Parker exhibited at Washburn more recently, and that they have continued to exhibit since his death. Alas, in my old age, I have found them too minimal for me.

This show is different, and a lot livelier. It is called “The Nines” because it features a short series of paintings done in 1964 and 1965 and consisting of a grid of nine squares (three across, three up-and-down) and with each square a different color.

The colors range from muted to brilliant, but there is so much variety among the squares in each picture that the whole effect is very appealing.

The smaller ones range from 22 x 24 to 34 x 33 inches. The larger ones are roughly 80 inches square, and as it happens the two with the most successful color combinations are two of the largest.

All are untitled, and identified only by numbers, but one can’t have everything, I suppose.

No. 398 (hanging on the wall at right angles to the entrance from the street) has deep colors, predominantly deep browns and deep grays, but also with a deep blue one, just in the center, and below it, a deep green one.

No. 396 (hanging on the wall backing on the street, to the left as one enters) has a range of brighter colors: peach, pink, apricot, white, cream, sepia, mustard, yellow, orange and brown. Luscious!

As a staff photographer and writer for Life magazine during its palmiest days of the 1950s and 1960s, Gordon Parks (1912-2006) has long been a culture hero for this fellow Luceling.

In fact, the first time I wrote about him in this column was 1998, when I attended a luncheon meeting of the Time Life Alumni Society and heard him reminisce about his career with Life, following it up with a spectacular slide show.

At that time, a retrospective of Parks’s work organized by the Corcoran Gallery of Art in DC was playing at the Museum of the City of New York, and a big show of earlier and crisper prints of his work was on view at the Howard Greenberg Gallery downtown.

But his work is so rich that it’s worth going back and looking at it again – the two current shows at Shainman being staged with the aid of the Gordon Parks Foundation.

To judge a) from the selection of images in this first show, and b) the gallery’s press release describing the second, the emphasis in the first show is on Parks’ fashion photography for publications like Vogue and his photographs of artists and actors, while the second will emphasize his documentation of social problems, and in particular his work relating to the travails of his fellow African-Americans.

But to me, the difference would appear to be also a stylistic one: this first show, while employing many images that would not have been out of place in Life, also consists more of what I would consider “art” photography, while the second show appears to consist more of Parks’ work as a photo-journalist.

I say this is a difference of style as much as it is subject matter because a lot of the subjects in this first show would fit naturally into the photographer’s career on Life were it not for the way in which the images have been printed – with exotic colors or simplified shapes or other techniques that don’t represent the original image so much as what has been done to it in the lab.

A case in point is a photograph that appears on the checklist as “Untitled, New York, New York” (1957). It shows a 28-year-old Helen Frankenthaler in her studio with her work.

If I remember correctly, this was one of the images used in Life as part of the long article they ran in that year on women artists. But it has been very delicately tinted so that it looks more like a watercolor than a photograph…..charming.

On the whole, I suspect that I prefer Parks as photojournalist to Parks as art photographer, but the Frankenthaler picture is an exception and so is another image called “Untitled, Chicago, Illinois” (1950). It shows a young African American woman gazing out of a window.

The subject was a high school friend of Parks’ but the picture goes beyond that to become a very simple and classic portrait.

The most beautiful of these three shows is easily “Fields of Color,” featuring large and gorgeous abstract expressionist, color-field and Washington Color School paintings dating from the late ‘50s to the ‘70s.

On the day I saw the show, work by all of these artists was on view in the main gallery space except Davis, Noland and Vicente -- though the office space was being used by a member of the gallery staff to show recent work by Poons to a client, so I couldn’t see any paintings that may have been on view there.

All the work I did see was well worth the visit, but the standouts began at the entrance, with a Hofmann immediately to the right of the door.

What a happy picture! It’s mostly white except for three little horizontal bands of clear color, plus more dancing blips of color and some equally playful little stained areas.

Its title is equally playful, though with a Germanic misspelling: “Frolocking” [sic] (1965).

There’s lots of white, too, in “Nebel” (1971), a familiar but still gorgeous “feathered” painting by Dzubas, though very little in the energetically squiggly Louis, “Para IV” (1959), a symphony in brilliant colors.

Still, among the works by Louis, my favorite was “Lamed Gimel” (1958), a huge & splendid example of the artist’s bronze “veil” paintings measuring 7½ x 12 feet.

The three Olitski paintings on view are also notable: two “stain paintings” from the early 1960s, plus one transitioning to the “spray” paintings of the later 60s.

One of the stain paintings, “Patusky Passion” (1963) is a very near relation to the Olitski that decorates the front jacket of the Portland Art Museum’s catalog of the Clement Greenberg collection.

However, the second of my two most favorite paintings here (along with the Hofmann), and perhaps the least familiar, is the large and impressive painting by Bush.

It is entitled “Pink Blossom” (1964) although the pink only appears in the trapezoid at the top of the painting. It is complemented by the narrow maroon rectangle at the center of the painting, inverted trapezoids of blue and black below, and a field of rich brown.

The story goes that this entire series, known as the “sash paintings,” were inspired by the artist’s sight of a mannequin in the window of a Madison Avenue boutique wearing a blouse above, a skirt below, and a broad cummerbund around its middle. Rarely has ready-to-wear inspired such a creative mélange of hues!