“ZURBURÁN’S JACOB AND HIS TWELVE SONS” AT THE FRICK COLLECTION 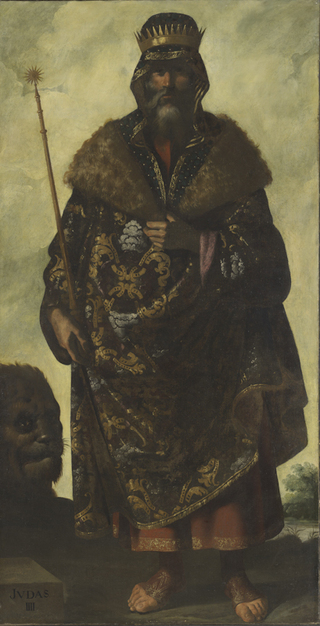 Francisco de Zurbarán (Spanish, 1598–1664), "Judah," ca. 1640–45. Oil on canvas , 79 1/4 x 40 3/4 inches (201.3 x 103.5 cm). © The Auckland Project/Zurbarán Trust. Photo credit: Robert LaPrelle.
As my first entry in the museum category in some time, I can recommend “Zurburán’s Jacob and His Twelve Sons” at The Frick Collection (through April 22). This stately group of thirteen paintings, each measuring nearly 7 feet high and about 3½ feet wide, graces the East Gallery of the Frick, on the ground floor, and offers a telling contribution to the lore surrounding Francisco de Zurburán (1568-1664).

Zurburán, mighty baroque master of the Golden Age of Seville, is best known for his many memorable scenes of Christian art. Not that this collection is unreligious, but it doesn’t illustrate any scenes from the New Testament.

Instead, it portrays thirteen Jews from the Old Testament, starting with Jacob, who as the son of Isaac and the grandson of Abraham was one of the original patriarchs of Judaism.

After that, they all wandered for forty years in the wilderness, after which they settled in Canaan under the leadership of Joshua.

The story goes that two of the tribes, those descended from Judah and Benjamin, settled in the southern part of Canaan, and the other ten tribes in the north. Then matters become a bit confused, because in the eighth century BCE, the Assyrians invaded the north and drove out its inhabitants.

Whatever happened to those ten lost tribes? Nobody can agree. At various times, they have been equated to various peoples, but at least one big school of thought, in 17th century Seville, was that they wound up in the Americas, becoming the ancestors of the native Americans that the Spanish had found when they settled there.

This conveniently allowed the belief to survive that all humanity was descended from Adam and Eve, and moreover justified the efforts of Spanish missionaries to convert the Native Americans without inquiring into their prior beliefs.

It made the topic of Jacob and his sons a suitable subject for series that Latin American prelates commissioned and installed in their churches (churches in Peru and Mexico still have such series).

This would explain why Zurburán and his studio devoted their talents to one such series, between 1640 and 1645, though it doesn’t seem to have made it to the New World, winding up in London in the early 18th century, where it went up for auction.

From London, twelve of these pictures eventually made it to Auckland Castle, in northern England, having been purchased by its resident, the Bishop of Durham Richard Trevor. He was a fervent promoter of religious tolerance and an advocate for the rights of both Catholics and Jews.

The thirteenth, the one showing Benjamin, fell to another bidder, and subsequently passed into the Willoughby de Eresby family of Grimsthorpe Castle, its present home.

In 2010, the Church of England decided to sell off the Zurburáns in the bishop’s castle, but they were saved by Jonathan Ruffer, a local philanthropic financier who acquired them and the castle as well.

Currently, plans are being made to convert the castle into a world-class heritage site as part of an even more ambitious plan to revitalize the entire region. And, while the castle is being renovated, its furnishings are free to leave home for the first time in over 2½ centuries.

They were displayed this past fall in the Meadows Museum at Southern Methodist University of Dallas, and in both venues have been joined by the Benjamin from Grimsthorpe Castle.

Fittingly enough, the entire show was organized by Susan Grace Galassi of the Frick, together with Mark A. Roglán & Amanda Dotseth of the Meadows.

Well, then, what do these thirteen closely related figures look like? To be sure, they are all single standing male figures, each portrayed full-length in a landscape setting.

All share the solid, meaty profiles of 17th century Spanish figural types, and are excellently painted (the labels fuss a bit about what parts of each painting may have been done by the master, and which by the assistants, but all of them have the traits of the master’s authoritative style).

All appear to be totally secular: there are no haloes, shining beams emanating from their heads, wings, eyes cast soulfully heavenward or other characteristics of 17th century Christian art. These are definitely earthbound mortals.

Beyond that, however, there is a rich variety in poses, costumes, attributes and views from which the figures are seen – some frontal, some with their backs to the viewer, some facing left, some facing right, etc.

There is also great variety in costume, from their feet (some bare, some in a range of footwear), to their heads (every possible sort of turban, Phrygian caps, etc.). Some of their costumes suggest 17th century military uniforms, and some farmers’ or even peasants’ garb.

Judah (ancestor to King David, King Solomon and eventually Joseph, husband of the Virgin Mary) has a crown and scepter. The cloud behind his head is the whitest and comes closest to suggesting a halo, but it only suggests it, it doesn’t insist.

All in all, a jolly good show.