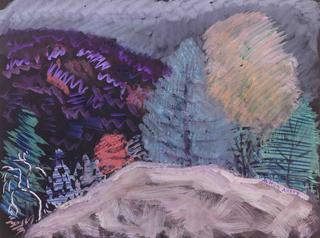 As an artist whose work was figurative but semi-abstract, I kind of resented Avery – knowing that figurative artists have always have had it easier than abstractionists. Yet belatedly I have come to realize that among Avery’s fans have been many abstract artists and that among critics, not only Hilton Kramer but much more importantly Clement Greenberg have written favorably about him.

The current show at Yares boasts – in its main, front area -- a magnificent array of these wonderfully pale, delicate yet steely late Avery oil-on-canvas landscapes and seascapes, each one more monumental and abstracted than the last.

Particularly extraordinary is the wild white mountain of sand in the foreground of “Dunes and Sea II,” on loan from the Whitney Museum of American Art.

Some paintings in this gallery are paired with earlier, more representational works – and these can be hilarious. One pair contrasts “Race Horse” (1955), a large oil of four horses in a stable with a groom, and “Untitled (Horse and Rider),” a smaller, wickedly witty watercolor from the 1930s.

Another winning combo is the large “Sails in Sunset Sea” (1960), a fanciful oil showing two almost unrecognizably abstract sailboats on a lavender sea with red ripples, juxtaposed with a smaller and more representational Monet-like gouache called “Untitled (Rocks at Sunset)” from the 1930s.

All of these bear witness to decades of painstaking study of European masters and the refinement of Avery’s own vision and technique, both of which become yet more remarkable when you know the exceedingly humble circumstances from which he sprang.

Born in upstate New York to a tanner and his wife, he moved with his parents to a suburb of Hartford CT when he was about twelve, and at first seemed destined to end his days as a blue-collar worker.

Initially he worked in mechanical and construction jobs, but then he signed up to take a lettering course with a local art program, and, when it was cancelled, wound up attending life drawing classes instead. Soon, he was thinking of himself as an artist with a day job, not a working class man taking courses at night.

In 1920, he spent the first of several summers in Gloucester, MA, in search of nature to inspire his work. This set a pattern he would follow for decades to follow: sketching from nature in the summer, first in Gloucester, next Vermont, Quebec’s Gaspe Peninsula, California, Maine, Cape Cod and other locales, then in the winters turning his sketches into finished canvases.

In Gloucester, too, in 1924, he met Sally Michel, a native of Brooklyn who had studied art and was finding work as an illustrator. He followed her to New York, they married in 1926, and henceforth she supported him with her illustrations and he was left free to paint.

Moreover, his move to New York liberated him from his training as a conservative painter in Hartford: he could see the work of European moderns in New York, and, under the influence of first, the German Expressionists, and later, Matisse, he was able himself to develop a more “modern” style.

Avery started exhibiting in the late 1920s, and although he had no easy path to fame and fortune, by the 1930s he was finding collectors and museums that welcomed his work, not least Roy Neuberger among collectors and The Phillips Collection among museums.

He also became friends with some of the future abstract expressionists: Rothko, Adolph Gottlieb & Barnett Newman. This was during a period when Rothko and Gottlieb were still painting in a representational style and doing subjects from the same urban and industrial milieu that had inspired Precisionists like Demuth & Sheeler in the 1920s. Avery, too, painted many of these same sorts of pictures.

Indeed, in the spring of 2010, Knoedler’s had a show of these early industrial subjects created by Avery and I loved it – reviewed it enthusiastically in my first posting at my current online locale.

Although the show included oils, watercolors and gouaches, I singled out the gouaches as especially successful, and I’m happy to report that the current show at Yares includes, in its smaller space, a wonderful display of these smaller and less abstract pictures from the 1930s.

There are ten bright watercolors, virtually all of people in bathing costumes disporting themselves at the beach, and four superb landscapes, all gouaches, and painted on black or brown paper, so they appear to glow in the dark almost like fireflies.

The watercolors are great fun, especially the one of boys doing calisthenics in front of a Coney Island roller-coaster, and the one of three females (a mother and two daughters??) posing for a fourth female holding a Brownie box camera (who remembers those???).

But the darkling landscapes are the most overwhelming, with all their dignity and their mystery. All show hills, trees and sky, in shades of blue or shades of purple, and they also look like ghost scenes at night.

Two of the four have additional images on the back, but the most seductive one of the six is “Untitled (Wild Purple Mountain).” You can tell it’s a wild purple mountain (over on the left of the picture) because of all the crazy squiggles on it and wiggly lines in purple.