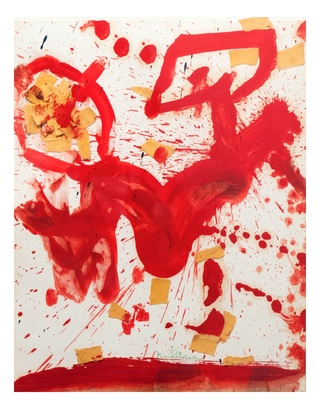 Helen Frankenthaler (1928-2011), "Untitled," 1959. Oil and collage on paper, 14 x 11 inches. Signed lower center, green crayon: 3/59 \ Frankenthaler (Inv# FA849). Courtesy Freedman Art
A singularly inventive group show at Freedman Art is “Colors” (extended through August 17). The idea for it was born when the gallery’s director, Ann Freedman, visited the Fralin Museum of Art at the University of Virginia in Charlottesville, VA last year, to see its exhibition devoted to Sam Kootz, the pioneering art dealer. While Freedman was there, her attention was drawn to a poem entitled “Colors” by a12-year-old schoolgirl named Zoe Kusyk that had been inspired by a 1977 Larry Poons painting at the Fralin.

The poem had won first prize in the annual competition inspired by the museum for works of prose or poetry inspired by works in the museum’s collection. The poem itemizes different colors but perfectly captures the way they all run together in the Poons painting and tells how the disparate but very human stories they tell also become one in the end.

The current show at Freedman Art begins with a very similar (though much smaller) Poons painting, also from 1977, and a Merz-collage by Kurt Schwitters from 1922-25 with a printed list of many different colors on it, combined with bits of paper in varied hues.

The show then progresses on with works by another twenty-five artists whose pictures (done in oil, acrylic, pastel, etc.) also seem to illustrate the way in which color speaks a very human language of its own.

They include a sweet little untitled Masonite panel of five manikins on a mustard field by David Smith; “Rose Corner” (1967), a striking set of vertical and diagonal bars of color by Jack Bush; two luscious little acrylic sketches in shades of rose and gold from the 1970s by Friedel Dzubas, and a vivid, almost all-red, almost minimalist Theodoros Stamos, “Infinity Field, Lefkada Series (1971-72).

Other winners include work by Jules Olitski, Motherwell & Esteban Vicente.

I was, however, most surprised by several small works by artists whom I haven’t looked upon with favor for years, if ever.

In this category I would include what resembles a delightfully simple pastel seascape by Lee Bontecou, though untitled (1983); an untitled (1955) gouache with collage in pink and black by Jack Youngerman; and a droll untitled little mixed media on board by Alfred Leslie.

This Leslie looks for all the world like a boy-and-girl picture, with blue and pink panels up top for the couple’s bodies, and two little legs beneath each panel. Done in 1960, just as the artist was emerging from his gestural abstracts of the 1950s, and before he embarked upon his exceedingly literal realism of the 1960s, it looks as though he was trying to make up his mind whether he should go post-painterly or figurative.

On the other hand, there was no surprise about the mostly-red 1959 Helen Frankenthaler oil and collage, with all its splats and its dancing cartoon figure – except how brilliant this artist could be, even at 14 x 11 inches, and how hilarious.

That she should have had a sense of humor, on top of everything else, reminds me of something Janice Van Horne Greenberg once said to me about her, to the effect that this was a girl who had everything – by which I believe that she meant looks, money and talent…..