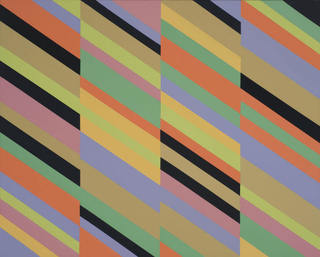 James Little, "Near There," 2017. Raw pigment on canvas, 33.5 x 41.50 inches. Courtesy of the artist and the June Kelly Gallery, New York
Two current shows of abstract painting that I can most heartily recommend are “Stanley Boxer: Gradations” at Berry Campbell in Chelsea (through May 19) and “James Little: Slants and White Paintings” at June Kelly in SoHo (through May 15). Little’s show is of new work, while Boxer’s is from earlier in his career, but both are full of surprises.

BOXER: ALL PAINT, WITH OR WITHOUT GRADATIONS

I have been looking at, and written about, the paintings of Stanley Boxer (1926-2000) since the 1990s. And virtually every time I’ve written about them, I’ve praised his multi-media extravaganzas of the ‘90s.

This has been true even on those rare occasions when the shows I was seeing included earlier work--most notably, Boxer’s traveling retrospective of 2009-2010.

This show did include some largely monochromatic, thickly-painted pictures from the late 1980s and early 90s, before he got into his final, baubles-bangles-and-beads phase.

However, to judge from my somewhat cryptic references to this late-80s work in the review of this show that I wrote for artcritical.com, I found them overly close to the thickly-painted, nearly monochromatic pictures that Jules Olitskiwas making at the same time.

Though I carefully insisted that Boxer had arrived at his pictures independently, I seem to have felt that the mixed-media works of the ‘90s were more distinctive.

The current show – combined, no doubt, with the passage of time—has enabled me to see these earlier, all-paint creations of Boxer’s with a different eye. I now find them a lot fresher and exceedingly lovely—in fact, stunning.

Although the paint is about as thick as was Olitski’s during this period, Boxer’s way of laying it on – in quantities of small, solid, pats – looks nothing like Olitski’s increasingly larger, and freer swipes.

And although the colors are comparably somber, and comparably monochromatic, there are often the “gradations” that this show’s title underlines – from one side of the painting to the other or from the bottom to the top.

There is also a certain chalky quality to the paint surface which contrasts with the Olitskian glossiness, and creates a very different effect.

I don’t think anybody with half an eye, seeing contemporary works by these two painters, hung next to each other, could possibly mistake the handiwork of one for the handiwork of the other.

That said, the most monochromatic pictures are apt to be the earlier ones, the gradations become more marked in the later ones, and I liked a lot of the earlier ones better.

Though every one I saw was oil on linen, they came in all sizes and shapes.
The earliest picture in the show – when I saw it – was from 1977, and (like all of them) had one of Boxer’s jaw-breaking titles.

Called, “Attentionscleavedharvestsofpast” it’s a symphony of browns, especially reddish-browns, but with an undercoating of blue. And it’s one of my faves—a good big picture, 65 x 55 inches.

The latest pictures there – when I saw it – were two smaller ones, both dating from 1984 They were “Heavenstill,” measuring 15 x 25, and “Sleethoarblanche,” a long narrow one measuring 80 x 25.

In both cases the gradations were very clear—with the former, from light at one side to dark in the center, and then to light again on the other side; and with the latter, from blue at the top to purple at the bottom.

If Stanley Boxer’s paintings can at least be said to lie within the parameters of the “painterly” orientation of later modernism, those of James Little carry on with the still far-from-exhausted “post-painterly” tradition of geometric abstraction of the 1960s (even if Little was born some three decades later than Boxer, and currently lives in our fad-happy Big Apple ).

His current show of 12 paintings has six “white paintings” and six “slants.” All were obviously very complex in concept, yet work out being to amazingly simple in effect and more rather than less rewarding to contemplate

The more experimental are the “white paintings,” whose top layer is off-white, of oil laid over stained linen. The white oil has a grid of rows of horizontal small ovals opening onto the under-painting in varied colors – apparently quite complex compositions lie below this white cloak.

All these “white paintings” are quite small –23 x 29 inches—and the ovals that form their grid are even smaller, maybe 2 inches long at most, and half an inch high – so that there are maybe 15 of them across each picture and more than 20 down.

I liked best the ones where the underpainting was brightest and most consistent -- “Apache” (with blues and greens), “Soft Target” (with russet and white), and “Refugee” (mostly speckled white, with purple or dark blue touches to set it off).

Even better I liked the “Slants,” though they were more familiar and consistent with Little’s earlier work. Three of them were large (64 x 74 inches), and the rest were smaller.

The smaller ones were framed, which in today’s climate somehow made them look a tad regimented. The larger ones were unframed, and looked freer.

In composition, all were similar: four or five vertical columns of stripes or bands of color that slant down diagonally from left to right.

Although one’s first impression is that all of these stripes are differently-colored, further contemplation reveals that only a very limited number of colors are actually and most harmoniously employed.

These colors are varied so adroitly that stripes of the same color only adjoin one another when they fit into the artist’s larger plan.

Two of the three large “slants” in particular stood out for me. One, on the wall behind the reception desk, was “Re-Set” (2017). This was distinguished by a soft but radiant palette of just five colors: deep gray, lime, cream, strawberry and tan.

The other, at the right-hand end of the gallery, was “Temporary Fixation” (2018). This was a blazing concatenation of red, pink, and a brownish maroon, with occasional accents of green and tan to complement them.

Both paintings constituted an intoxicating mix of discipline with innovation.