RUN, DO NOT WALK TO “GOLDEN KINGDOMS” AT THE MET 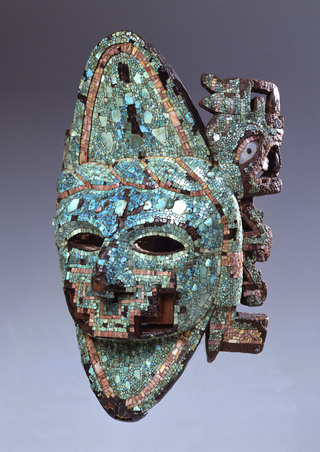 MASK. Turquoise, wood, mother-of-pearl, shell (Spondylus princeps, Spondylus calcifer). Probably Mixtec (Ñudzavui), A.D. 1200–1521. Mexico MiBACT Museo delle Civiltà - Museo Nazionale Preistorico Etnografico. “L. Pigorini” Image © Museo delle Civiltà - Museo Nazionale Preistorico Etnografico L. Pigorini, su concessione del MiBACT, Photo Archive scans (Mario Mineo).
I’m afraid I’m just not like other people. For most, the mention of “gold” in an exhibition’s title sends them en masse to see it. But for me, the medium is not the message, so I put off until the last minute seeing “Golden Kingdoms: Luxury and Legacy in the Ancient Americas” at The Metropolitan Museum of Art. BIG mistake – as it only runs until May 28 now, and it’s terrific! So by all means, run do not walk to see it.

What deterred me, I’m afraid, is another show I saw at the Met, very similarly entitled “Silla: Korea’s Golden Kingdom,” and staged way back in 2013.

It presented work of a really ancient culture that flourished between 400 and 800 A.D. The show certainly had a lot of gold objects, but beyond the fact that they were gold, they didn't in my opinion have that much to recommend them--especially not the statues of Buddhas, some of which struck me as only provincial imitations of Chinese models. And it was my experience of that show which predisposed me to put this one on the back burner.

But this one is all different! It features more than 300 objects drawn from more than 50 museums in12 countries, all created by the indigenous peoples of western and northern Latin America from between 500 and 800 BC up until the Spanish conquest that began in the 1520s.

Although it includes lots of golden objects, it also includes a great many works done in other media, from fabric, shells and feathers to silver, copper, jade and many other kinds of precious and commonplace stones (obsidian, turquoise, flint, basalt, limestone and others).

Even more importantly, the imagination and craftsmanship of nearly everything is truly majestic and wondrous.

As I worked my way through the show, I couldn’t help noticing how often the most exquisite workmanship was to be seen in the works not made of gold.

Consider, for example, the marvelous detail on the mask I am using to illustrate this review: it is all made up of tiny pieces of turquoise, wood, mother-of-pearl and shell.

True, as the literature accompanying the show warns you even before you enter it, many of these peoples valued other materials more highly than gold. Jade was most esteemed by the Olmec and the Maya, while the Incas and the Aztecs prized feathers and tapestry.

And, right at the end of the show, a little piece of wall text observes that these indigenous peoples couldn’t understand why the Spanish were so obsessed with gold (or words to that effect).

But as our culture is still dominated by children of that vast migration from Central, Western and Northern Europe that began with the Spanish conquest, we seem to be obsessed with gold still.