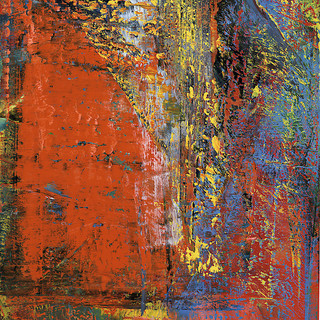 "The exhibition at Barberini Museum Potsdam is large and mainly devoted to Richter's 'squeegee' paintings. They acknowledge a debt to Abstract Expressionism but he appears to be unaware of painters in Europe, America/Canada of his age or younger who are working in a similar vein.

Richter was born in 1932 in Dresden East Germany and managed to escape well before German re-unification, settling in Düsseldorf where he made his way in the West German art world becoming Professor for painting at the Kunstakademie Düsseldorf.

His reputation is worldwide, his work widely exhibited and collected for enormous prices.

The Grabbeplatz Museum Düsseldorf permanently exhibits the Nord Rhine Westfahlen Collection which has a huge Jackson Pollock 'No.32-1950', black enamel on raw canvas, which Richter would know well.

It was painted for a film whilst the camera was running. Pollock is shown using his painting method, dipping his prepared sticks into a large can of black enamel to get the sticks loaded so he could paint without touching the surface of a huge canvas rolled out on his small studio floor.

He works the entire canvas from all sides systematically filling it; an exciting and physically active performance for the camera.

Later in the film he is shown using that method to paint on glass where the camera is underneath the glass. Then suddenly he stops, wipes the glass clean saying that he 'lost contact with the work'.

He collects some wire mesh, string, strips of colored glass and some gravel and begins again, securing the objects with aluminum paint before using black enamel. We see him through the glass, his hand and face, concentrated, intense, fast and hesitant, troubled even. And we witness a work of art being made from start to finish.

' No. 29,1950' now belongs to the Canadian National Museum, Ottawa and is a masterpiece.

I dwell here to point out that Pollock was reacting to the challenge of a new support, the glass and using unusual obects/things in the work, and to the tension of showing his all in public.

By contrast 'No 32' is bravura action and has been taken as the whole point of his endeavor by the Düsseldorf school and most of the art world, while I find it visually dull.

Richter uses a squeegee to apply his paint, sometimes as big as the height of the canvas which is placed vertically, traditionally, and he uses artists' oil paint which is dragged and rubbed across the surface. Colors bleed into one another making for a soft focus effect.

There is an element of chance in the procedure which the Ab Ex painters also exploited. And like them, he also adjusts, adds and subtracts mainly after the first coat has dried.

Later additions are often light toned yellow or white which sit forward from the other colors. And sometimes black or dark blue is used for emphasis and they go back into the picture plane.

He is using his taste, trying to make the picture cohere and is going against his conceptual leanings. A chance to anchor the picture with finesse is missed when all one sees are small amounts of paint against the vertical stretcher bars.

It has been left like that to show traces of the process but that is all, and one thinks, so what !

His smaller works ( ca. 150 x 80 cm ) are better because he lets go and is not trying to impress us with a cool and measured grand manner. These tend to use brighter color which is a problem for him as he is essentially a tonal painter using light and dark in the Old Master manner.

When he tries to take on bright fauve-like color it is without feeling or experience and I can imagine that he has little empathy for Matisse's art But where his art gets better and he makes resolved paintings are when he is using close tones and greys.

And here I come to the most damning criticism of this minor painter. The Barberini opened in 2016 and for 2 years they exhibited in a small room two large Richter squeegee paintings and a modest sized painting by Hans Hofmann (born in Bavaria 1880 emigrated to USA 1932).

He is rated with Pollock as a leader of the Ab Ex movement, a father figure. The Hofmann managed to, using artists parlance, kill the Richters. It was burning on the wall with its energy, and the experience of his many years in Munich , then in Paris followed by New York.

And the persons responsible for putting these paintings together obviously could not see the difference and like Richter they were unable to because they were looking for something else in art other than what was in front of their eyes.

Pollock provided that something else unwittingly with his large 'No.32' but made up for it with the glass 'No.29'."