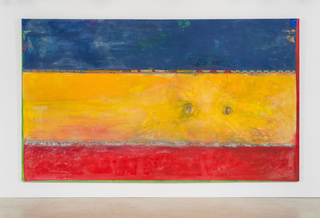 Frank Bowling, Elder Sun Benjamin, 2018. Acrylic and mixed media on collaged canvas, 119.29h x 203.54w in. (303h x 517w cm.) Courtesy Alexander Gray Associates, New York; Hales Gallery, London. © 2018 Frank Bowling.
With a birthdate of February 26, 1934, Guyana-born, London-based Frank Bowling finds it harder to get around than it used to be, but he still made it to the opening of “Frank Bowling: Make It New” at Alexander Gray Associates (through October 13). And all his American fans (including myself) were very glad to see him.

His show consists of only nine paintings, but all were made in the past three years. And all combine the abstraction he has practiced since the 1970s with innovations he has developed since the 1990s. The results are highly likeable.

Six of the nine are only medium-sized, and have for their central image a series of cloudy but radiant forms. Two of these stood out for me: “Paul Hedge’s Gift of Unraveling Silk” (2017) and “Regatta” (2017).

More challenging were two tall, narrow canvases. Each about 5 feet tall and 3 feet wide, they are entitled “Drift I” and “Drift II” (both 2017). In both cases, a series of broad but hard-edged horizontal bands of color underlie a rich vertical narrow centerpiece of poured paint.

For me, “Drift I” worked better, with the poured paint looking more like a fountain or a plant than a waterfall. I liked the pale, silvery colors of the pour better, and the colors of the underlying stripes, too – with black, baby-blue, yellows and greens intermingled.

One reviewer seemed to think these stripes are reminiscent of Gene Davis. But Davis was best known for his vertical stripes. To the extent that any indebtedness is involved, I’d see Kenneth Noland instead on Bowling’s artistic family tree --- Noland’s stripes were horizontal, though mostly narrower than Bowling’s. And the real novelty of Bowling’s concept is combining the hard-edged with the painterly.

The most impressive piece in this show is “Elder Sun Benjamin” (2018). It is also far and away the biggest painting there, measuring about ten feet high by fifteen feet wide. And the choice of the colors for its three broad horizontal bands – blue, yellow and red -- takes us back to Bowling’s youth.

This was when one of his most famous canvases consisted of three vertical bands of green, yellow and red with a map of South America stenciled on it. Its title was “Who’s Afraid of Barney Newman?” (1968), and it in turn referred, not only to his Guyanese heritage, but also to those equally if not more famous paintings done in the later 1960s by Barnett Newman and entitled “Who’s Afraid of Red, Yellow and Blue?”

“Elder Sun Benjamin” incorporates both Bowling’s earlier thinking and his more recent way of making pictures. It is an image painted on one large canvas, but collaged onto a slightly larger one – and decorated around the edges of the stripes and the edges of the central piece with little stenciled images.

Both the little stencils and the stitches used to collage the two pieces of canvas together constitute a tribute to of his mother, who during his childhood in Guyana both kept a variety store where she sold little stencils -- and also worked as a seamstress.

The painting as a whole has a decidedly human dimension, not only because the lines dividing the horizontal bands of color are soft rather than hard-edged. In addition, the painting sports two rounded yellow shapes on the central yellow band of color, slightly off-center. They remind me somehow of two moles on my well-loved grandmother’s face, and make the painting itself curiously reminiscent of a human visage.