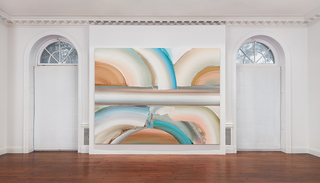 Ed Clark, Elevation, 1992. Acrylic on canvas, 114 x 150 inches (289.6 x 381 cm). Courtesy Mnuchin Gallery, New York. Artwork © Ed Clark. Photography Tom Powel Imaging.
With a birth date of May 6, 1926, New Orleans-born, Paris-educated Ed Clark doesn’t get around that much anymore. However, Mnuchin on East 78th Street has taken over the task of promulgating his talents with “Ed Clark: A Survey” (through October 20). This handsome group consists of 20 medium-sized to very large abstract paintings dating from the last half-century -- plus a touching little and very representational self-portrait from 1947-49.

Three of these paintings are from the ‘60s, three from the ‘70s, four from the ‘90s and eight from the 21st century. With pleasure I can report that there are standouts among both the earlier and the later works. Both of these standouts are currently displayed on the second floor of the gallery.

In the earlier category, marking the period when Clark was making art history with his ground-breaking shaped canvases, we have the monumental “Intarsia” (1970), an unstretched oval canvas ten feet high and nearly twice as long.

An acrylic, it consists of variously-sized horizontal stripes in a most individual palette of pinks, pale yellow and baby blue on its top two-thirds, while the lower third is horizontal stripes of eggshell whites and (as nearly as I can make out) pale grayish blues.

Equally or even more exciting is the major canvas from Clark’s later days. This is “Elevation” (1992), another giant acrylic on canvas measuring about 10 feet high and 14 feet wide. It dates from a period when Clark was using push brooms to apply paint to canvases laid on the floor, and the result is tubular-looking strokes, often laid on in arcs.

These can become comic if not properly organized, but in “Elevation” a strong straight horizontal tube-shape unites bottom and top arcs, creating an exciting composition reminiscent of clouds mounting to the heavens.

The fine photograph provided by the gallery doesn’t quite capture the feeling one gets from standing close to the painting and gazing up at this image – but take it from me, it’s very inspiring.