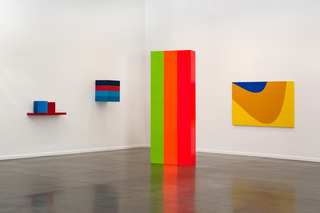 It is not my custom to review shows I haven’t seen, but I feel moved to say a few words about “Ann Walsh: Colors,” at the Sam & Adele Golden Gallery in New Berlin, New York (through March 15, 2019). That is because although I haven’t seen this particular show, I have seen a lot of Walsh’s work in her basement studio in Greenwich Village over the years. The result is that when I look at the photographs in the handsome catalogue, I feel I am among old friends.

That said, I’m not going to go on at great length. According to the artist’s checklist, the show has 23 pieces, beginning in 1986—three years before she began showing at Greenberg-Wilson—and concluding with work from this year. But the period with which I’m most familiar goes from the early part of this century up until fairly recently. Throughout this entire period, her works have been marked by clear, pure and quite beautiful colors. However, the size and shape of these works have varied, most notably between the two- and three-dimensional.

As I understand it, Walsh herself thinks – or at least originally thought – of all of these works as “paintings.” And throughout, she has been concerned with covering them with very carefully chosen flat areas of color. But, to take just the four examples of her work in the accompanying installation photograph, at the far left we have “Local Color” (2001), which is two blocks of wood, resting on a wooden shelf, and made with acrylic and synthetic paper on wood. It has just two colors, red and blue.

Next to it, we have “Sailor” (2004), a single block of wood which can be stood on a table or (as in this case) mounted on a wall. It’s acrylic on wood, striped horizontally with bands of gray, red and two blues – a very nautical combination.

Standing in the center is “Block” (2012), a stunning free-standing combination of vertical stripes of red, pink and chartreuse. It is made of thin strips of vinyl on laminate (vinyl being available in many different colors). At 8 feet high, it is the tallest piece in the show, but not the limit of Walsh’s ambitions: using photomontages on her computer, she has decorated the sides of entire buildings.

Finally, on the right is situated “Swell” (2018), which hangs on the wall and, being made of acrylic on canvas, is definitely a painting, in the conventional sense of the word. Moreover, it has wide, vigorous curves – from bottom to top, of yellow, ocher and blue. Yet the finish is as perfect as it is on any of the sterner, more geometric pieces. And they all go harmoniously together.