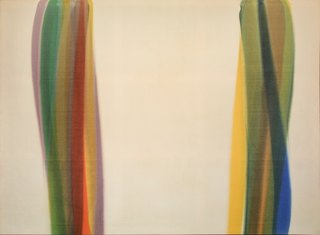 Morris Louis (1912-1962), Twined Columns II, 1960. Magna on canvas, 102.52 x 140 inches (260.4 x 355.6 cm. Inv#3180. Courtesy of Yares Art.
Moving on up from Chelsea to midtown we come to Yares Art on Fifth Avenue, and a truly lovely exhibition of fifteen (count ‘em, 15) classic color-field paintings entitled “Morris Louis: Spectrum.” This show will be on through January 12, 2019, though if you plan to visit it between Christmas and New Year’s, you will need to call the gallery, as they had not yet decided which days during that period they would be open when I visited the show).

In the years just before and for some decades following the untimely death of Louis in 1962 at the age of only 49, gallery shows of his work tended to focus on very similar paintings belonging to a few selected “groups” – most particularly “veils,” “unfurleds,” “florals” and “stripes.”

Or at least, this is how I first became aware of Morris Louis, entering the contemporary art scene as I did in the late 1960s.

However, when I saw the exhaustive 1985 catalogue raisonné compiled by Diane Upright, I realized that Louis was an evolutionary painter, not a revolutionary one.

By this I mean that instead of switching abruptly from one of these groups to another, his paintings evolved from one to the next by gradual stages, and there were lots of “transitional” paintings that had not been shown.

Most likely it was felt that not only were the paintings belonging in these groups the best and most “perfect” of Louis’s output, but in addition that his work in general was so radical that the best way for it to gain public acceptance was by limiting its public exposure to these few seemingly simple groups.

However, since the later 1990s, we have seen more and more of these “transitional” works emerging in gallery and even museum shows (mostly, I would hazard a guess, coming from the estate of Morris Louis).

In the literature accompanying these shows, we have also witnessed the birth of a new “category” of Louis paintings, namely “Themes and Variations.” And most of these “themes and variations” are very lovely, too.

There is also a splendid “unfurled,” dated 1960 and titled “Beta Gamma,” though it is a little different from other examples of this type that I’ve seen, by virtue of a little free-form dripping at the bottom of those wonderful tiger-like stripes.

On top of that are five vertical “stripes,” three rather broad ones and two narrower ones (the narrower variety being those that I’m most familiar with).

Also, for a switch, we have one painting where the stripes are arrayed on the diagonal, and “Horizontal I” (1962), whose title aptly describes its horizontal stripes.

The rest of the paintings at Yares Art fall into the “Themes and Variations” category.

Among them, I especially liked “ Aleph Series VII” (1960), with narrow strips of many different bright colors charging in from the edges of the canvas, but never meeting in its middle; and “Aqua” (1960), two vertical columns of color, widely spaced and all blue.

Most of all, I liked“Twined Columns II” (1960). This is another painting with two widely spaced columns of color, but the columns' colors are paler and softer and more variegated than those in either the “stripes” or “Aqua.”

Somehow miraculously twisted as they rise, they made me think of those majestically gilded twisted columns holding up the “Baldacchino” by Bernini at St. Peter’s basilica in Vatican City.