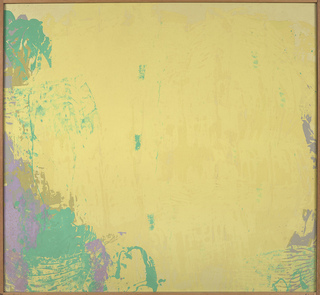 Walter Darby Bannard, Peru, 1971. Alkyd resin on canvas, 51 x 55 inches. Courtesy Berry Campbell.
This time, my destination in Chelsea was “Walter Darby Bannard: Paintings from 1969-1975” at Berry Campbell (through December 21), but on the way I stopped in to see “Walton Ford: Barbary” at the handsome new “flagship” gallery of Paul Kasmin at 509 West 27th Street (through December 22).

According to his Wikipedia entry, “Walton Ford (born 1960 in Larchmont, New York), is an American artist who makes paintings and prints in the style of naturalist illustrations, often depicting extinct species.”

These somewhat stylized but still very recognizable pictures, often and maybe always giant watercolors, have fascinated me on those occasions when Paul Kasmin hung one or maybe even two of them in his booths at our local art fairs, so I was looking forward to seeing a whole show of his work.

The current show has just five very large watercolors, each depicting a “Barbary lion,” this being a type of lion originally found across North Africa but now extinct in the wild (though with isolated examples still to be found in a few Old World or New World zoos).

According to the show’s press release, this was “the lion of the Roman amphitheater, the lion painted by Delacroix, and the lion that roars for the Hollywood studio MGM.”

To judge from Ford’s images (and others on the web), this is (or was) a handsome animal who looked almost exactly like the lions found in other parts of Africa except that the mane of the male lion was somewhat darker and he may or may not have been larger and more heavily muscled (there seems to be some debate, too, as to whether or not the Barbary lion constitutes a separate sub-species).

Four lions in the Ford paintings are males; the fifth is a female (to judge from its lack of a mane). She has a kind of ghost female hovering in back of her, and the scene is an eerie street in Leipzig, where in 1913 eight lions escaped from a P. T. Barnum circus, and had to be hunted down (six were killed, two recaptured).

I really liked this picture, and one other, showing a male crouched in a cramped area, perhaps waiting to be let loose into the Colosseum and tear Christians from limb to limb.

However, I was turned off by the two pictures in which the lions had blood-stained mouths. The blood looked too cartoony. I am looking forward to a Ford show with more successes.

The Darby Bannard at Berry Campbell on West 24th Street show has many more successes, not least because it’s a much bigger show (with nineteen canvases on view).

I counted at least eight paintings that I really related to -- although this show is devoted to a very demanding -- because experimental -- period when the artist was transitioning from his early hard-edged and geometric minimalism to his more mature, free-formed and painterly modernism.

It is in the nature of experimentation that not every experiment comes off, but as Clement Greenberg once advised Jacob Kainen, in a letter that I’ve never forgotten, the artist must continually take risks if he wants to renew his art (or words to that effect).

This show appears to stop right about at the moment when Bannard began really ladling on the gel. The two last paintings in the sequence of nineteen here are both embellished with streaks of it.

One of them, “Glass Mountain Fireball” (1975), has a field of fiery reds and oranges, and is embellished with narrow upward squiggly streaks of olive green gel. The effect of such a contrast is spicy and delightful.

One of the most intriguing aspects of this show is the appearance and disappearance of the geometry underlying the free-form. Quite a number of paintings here attempt to juxtapose the two modes, and surprisingly enough, the effect can be very pleasing – or not.

One of the most pleasing is “Summer Joys No. 2” (1970), with a summery tangle of yellows (lemon & apricot) laid atop vestiges of nine squares in pale tan and pale green.

Another charmer is “China Spring #3” (1969), in lime, mint, khaki and pale peachy pink, embellishing yet diminishing the under-drawing of a large set of tic-tac-toe squares.

Still, one of the many virtues of this show is that it doesn’t try to establish a straightforward linear progression.

Rather, it suggests spiral evolution from minimalism to modernism, or what the French call reculer pour mieux sauter – fall back in order to jump further forward.

“Winter’s Traces” (1971) comes early not late in the sequence, yet it is all a symphony of swaying mint, apple green and olive daubs without the slightest hint of underlying squares.

Two years later, nearly at the end of the sequence, “The Meadow” (1973) is a forthright bright green with decidedly straight vertical lines through the body of the picture, topped with straight horizontal straight lines.

Throughout the show, in fact, the colors are lovely – and loveliest (in my opinion) when not tied down to delineation. One gets this square between the eyes when one walks into the gallery from the street and sees “Peru” (1971) right in front of the door.

Although this is another early one in the sequence, I see no squares at all. But what an exploding galaxy of merry yellow is massed in the center of the canvas, and how loosely yet tellingly it is framed by cloud-like elements of mint green, olive and mauve!

You pretty much nailed the Darby Bannard show Piri. I would not give this work quite as high a mark, but certainly agree with you that it was a step backwards that fertilized the next step forward. How far back is a matter of aesthetic experience, which can't be demonstrate anyway, only reported. Congratulations on a lucid statement of your take on the matter.

Forgot the signature. Entered below.

Bless you John. I always appreciate your comments, especially because you put them out where everybody else can read them. Alas,I'm afraid the Authors Guild, which set up this site for me and gives me solid advice on how to fix it whenever something goes wrong, has told me they're adopting a new format which I suspect will eliminate your capacity to comment online. But I will always welcome your comments, via regular email if by no other way...