CHRISTMAS AT THE FRICK 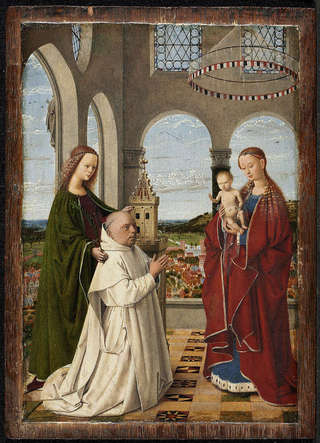 What could be more appropriate for the Christmas season than an image of the Virgin and Child? And here is The Frick Collection, giving us not one but two fine versions of that subject, in "The Charterhouse of Bruges: Jan Van Eyck, Petrus Christus and Jan Vos" (though January 13).

I will admit that when I first got the press release describing this show, I glanced quickly over it and concluded that it was a show of only two paintings. The larger one was by Jan Van Eyck and His Studio, is owned by the Frick, and depicts the Virgin and Child with the kneeling figure of Jan Vos and two saints, Barbara and Elizabeth of Hungary.

The other, smaller one, visiting from the Gemäldegalerie in Berlin, is by Petrus Christus and depicts the Virgin, Child and Jan Vos with just one saint, Barbara.

Both depicted a wealthy member of the order, Jan Vos, and had most likely been paid for by him in hopes of easing his path to salvation. Just two paintings, including one I'd most likely already seen? I decided I didn't have to see this show right away.

But I did get to it and I'm very glad I did. It's well worth a visit. For one thing, it's not just two paintings.

It's a whole little show, devoted to the Carthusians, a contemplative order of monks whose monasteries were called "charterhouses" (nothing to do with charters, just a typically mauled English version of the French name for a Carthusian monastery, which is "chartreuse" – and yes, they created the yellow-green liqueur).

The show at the Frick is hung in the pocket-sized Cabinet Gallery right next to the gift shop – with four oil paintings (don't forget, the Italians learned oil painting from those Early Netherlanders), three sculptures (two free-standing, one relief), one missal, one drawing and one curious object called a "prayer-nut".

This last is a delicately-carved little boxwood globe, which opens to show the prior-general of the Carthusian order, being introduced to the Virgin and Child by St. Bruno, the order's founder.

Prayer-nuts of this type were used by the monks as a devotional object to aid in prayer and meditation – much as today's yoga practitioners might use a mantra.

The larger Frick painting (ca. 1441-43) is, of course, very lovely even if it was only sketched out by the great Van Eyck himself, and completed by one of his assistants after he died.

The two small kneeling Carthusian monks (ca. 1380-1400), made in marble by an unknown Burgundian artist, are also very fine, but the jewel in the crown here is the Petrus Christus version of the Virgin, Child and Jan Vos.

The artist, it turns out, was born sometime around 1410 and became active in Bruges from the 1440s on until his death around 1475.

He seems to have been omitted from the stellar course in the Northern European Renaissance that I had with the great Julius Held all those years ago at Barnard -- but not because of any lack of talent.

It must have been simply because he belonged to the second or maybe the third generation of Early Netherlandish painters, and Held could cover only so much – he began with the earliest, Robert Campin, and continued with Van Eyck and Rogier Van Der Weyden before moving on, I think, though I can't remember to whom or where….

Anyway, the Petrus Christus from the Gemäldegalerie (also known as "The Exeter Virgin") is so light and airy that you feel a puff of air would waft it away.

Vos had been elected prior of the Charterhouse of Genadedal, a monastery not far from Bruges, and is shown kneeling before the Virgin and Child, with Barbara and her attribute, the castle in which her father supposedly incarcerated her, behind her.

All four figures are tasteful and graceful in appearance and dress. They are set into a typically Renaissance combination of arcade that opens out into a dulcet blue sky and a deliciously miniature landscape/cityscape – such backdrops, I believe, having been another one of those innovations that the Italians may have imported from those Early Netherlanders.

ADVT.: In case you're not into Christmas (and even if you are), my next post, on the day after Christmas, will be a very secular article about a movie that has been attracting attention among my circle this past fall, "The Price of Everything."