MEDIEVAL ARMENIA AT THE MET 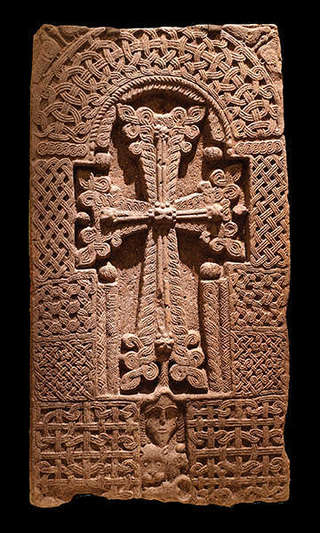 First the Virgin Mary, at the Frick. Now a cross, the symbol of the Crucifixion, to illustrate my review of "Armenia!" at The Metropolitan Museum of Art (through January 13). But can I help it if art made way back in the Middle Ages still has the mysterious power to enchant us, and if the art which has survived since then is mostly religious?

From what little I know, Armenia – at least that part of it in the frosty Caucasus between Europe and Asia -- has only sporadically been an independent country since the first century BC.

In the wake of World War I, Russia annexed it and made it into a Soviet socialist republic, but since 1991, and the dissolution of Communism, it has become an autonomous (and presumably capitalist) republic.

For centuries before, though, it had retained a national identity -- as witness its language, its ancient alphabet, and its early Christianity.

It is said by some to have become Christian in 301, making it the first Christian country and beating the Roman Empire to that title by a nearly a century (the Roman emperor Constantine legalized Christianity in 313 with the Edict of Milan, but it took Theodosius, one of his successors, to make it the official state religion in 380).

This show, which is all about medieval Armenia, covers a period when parts or indeed all of it were under the political control of the Byzantine Empire to the west, various Persian empires to the east, and Islam coming up from the south.

However, being a gifted & determined people, throughout this period the Armenians infiltrated their supposed conquerors, with outposts and prosperous trading families clear through from Italy to what is today Isfahan in Iran.

In this exhibition, there is an extraordinary selection of illuminated manuscripts, often bound in richly accoutered gospel books but occasionally recording secular narratives with equal pictorial grace.

The show includes jewelry, ceramics, precious reliquaries, church models, liturgical garments and accessories in luxurious fabrics, a four-sided stela carved from volcanic tuff and most especially several big & elaborately-carved "khachkars", also of tuff or of other kinds of stone.

These "khachkars" are a distinctively Armenian form of cross stone – originally serving as an emblem of salvation for the living and the dead, but later adapted to memorialize military victories or important sites, and in church construction.

This show is very much about Christianity and the myriad religious art produced during Armenia's long Middle Ages (as far as this show is concerned, those Middle Ages didn't end until the 17th century, with the introduction of printed books).

And if you enjoy medieval art as much as I do, this is a great show to see it at, with all its quaint and delectable, faint control of reality or anyway its whimsical way of depicting reality in art.

Much of the imagery in the manuscripts here is even quainter and more fantastic than contemporary European work – but not because the artists were any less gifted or celebrated: this is one show of medieval art where a sizeable percentage of the manuscripts on view were created by artists whose names have survived.

"Armenia!" is one of the grand old-fashioned kinds of exhibition that consists largely of loans from other institutions. More than half of the works on view were loaned by The Republic of Armenia, with most of the rest coming from its churches and Armenian religious communities in nearby Middle Eastern countries.

"Armenia!" was moreover organized by one of the Met's curators: Helen C. Evans, with the support of the Met's C. Griffith Mann, and the research assistance of Constance Alchermes.