THREE SHOWS IN HONOR OF THE ART STUDENTS LEAGUE 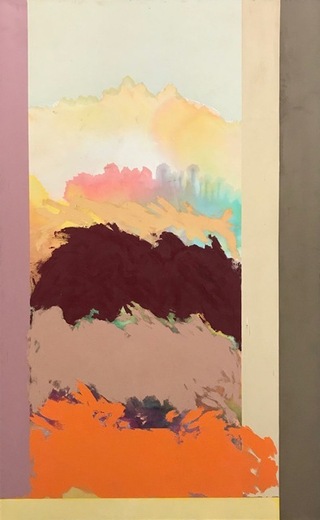 Maybe some of my readers have never heard of The Art Students League of New York, founded in 1875, but it's that rare institution where teachers teach and students learn -- all without enrollling in courses, taking exams and receiving degrees.  Such a setup seems to suit artists  fine, so over the years, the League has attracted a remarkable body of teachers & students  Many of these were included in three recent shows that I truly wish I had gotten around to writing about while they were still up.

This ambitious joint undertaking featured in three different venues more than 90 artworks by 60 major artists who taught, studied or studied AND taught at the school. Major works by earlier artists were at Hirschl & Adler; works on paper by many of these same artists were at 511 Projects, a curatorial space near the Flatiron Building; and work by artists who were or are still involved with the school in the late 20th and 21st centuries were at the Art Students League itself.

The "Works on Paper at 511 Projects" was the first of these shows that I saw.  As organized by Mara Miller, whose premises it occupied, it included a range of work, from ultra-traditional figure studies by Guy Pène du Bois to conceptual art by Robert Smithson,  but was heaviest in the middle range of semi-abstract work by League workhorses like Jan Matulka & Vaclav Vytlacil – plus a knockout ultra-simple 1921 watercolor and pencil by Stuart Davis, "Untitled (Greek Backwards)."

The middle installment of "The Masters: Art Students League Teachers and Their Students" at Hirschl & Adler was actually the third of these shows that I attended, and contained the most heavy hitters with established reputations.

Though I can't single out any individual star, I was very impressed with the generally high caliber of the work on display – good examples of every artist, as chosen by Tom Parker, the gallery's associate director, and Mara Miller.

The final installment of this three-part show, though the second I attended, was in the Phyllis Harriman Mason Gallery of the Art Students League itself.

It had only 17 works, but strained to be up to the minute, with a conceptual work by Naomi Campbell (not the famous model), and an electronic one by Gary Hill (turned off when I was there).

I also noted a very nice – and very traditional -- watercolor over graphite by Frederick Brosen entitled "Along the Boardwalk," and an interesting 9-paneled picture of a female nude swimming in a blue field. It was by Susan Weil who besides being an artist herself was in the early 1950s married to Robert Rauschenberg, and the mother of his son.

Silly me!  What I went for was four singularly tasty abstract paintings:

2) by James Little, "Checkered Republic" (2017 and very similar to work I reviewed at his show last May);

3) a nice, though small, and interestingly granular Richard Pousette-Dart, "Within a Grove" (1978); and finally,

4) surprise, surprise! an early Ronnie Landfield,  "Lady Gray" (1971).  It was ever so much fresher and livelier than his more recent and formulaic work: a towering vertical (90 x 51½ inches), with all manner of appetizing colors: orange, peach, and maroon, with touches of rose, lemon, mustard and khaki tossed in the mix.