"IN PRAISE OF PAINTING:" THE "GOLDEN AGE"OF THE DUTCH 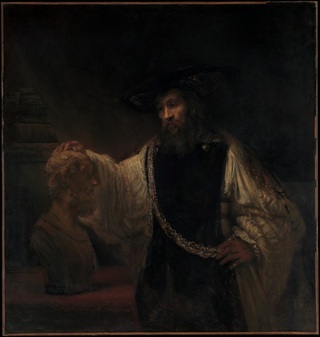 It's no secret that 17th century Dutch painting is one of the glories of art history, nor are those New Yorkers who care about it unaware that The Metropolitan Museum of Art  has an excellent collection of it – excellent in both quality and quantity.  For some time now most of these paintings have been out of sight due to renovations of its gallery space.  Now the the Met is staging "In Praise of Painting: Dutch Masterpieces at the Met,"  which is, in fact, only a rehanging of 65 works in its permanent collection (through October 4, 2020).

These paintings are installed in the ground-floor level of the handsome Kevin Roche-designed Robert Lehman wing of the museum that opened in 1975, assisted by what seems to be an extra number of potted plants in its central courtyard and the explanation that the show is here so that it could incorporate paintings given to the museum by Lehman.

He, it seems, was one of those self-centered collectors who wouldn't let his donations be hung outside of his wing or without the rest of the permanent collection, but as he only seems to have been responsible for four paintings in this show, and only one of them (the Rembrandt) is exceptional, I think an additional reason this show is hung here is so that the space doesn't have to be filled up with more expensive temporary exhibitions.

Taking advantage of how the wall space in this area is divided into sections, the show is hung in nine "thematic" sections that sometimes work and sometimes don't.  The section devoted to portraits is somewhat repetitive (with five consecutive portraits of gentlemen in white ruffs), but the green-painted alcove with landscapes, seascapes and a large floral still life is like a lush little garden, its welcoming benches offering a restful sojourn in a peaceful park.

Some of the titles of the wall texts that introduce the different subject matters in each section are rather tortured, but some make sense, and anyway the paintings themselves are glorious, from the more interesting portraits (mostly of women), to the rollicking scenes of lower-class roisterers, the later crystalline scenes of upper-class ladies in interiors, and even the quasi-religious church interiors.

Almost all of the 17th century Dutch masters that you ever heard of are here, from Hals and Hobbema to Pieter de Hooch and Jan Steen, Jacob van Ruisdael and Salomon van Ruysdael, still life masters like Willem Kalf and Willem Claesz Heda, and four – count 'em, 4 – Vermeers, including the sparkling "Study of a Young Woman" and the mystifying "Allegory of the Catholic Faith".

Scores of paintings here are by artists you never heard of, but still maintaining the same high standards, and for the most part, tight and neat in their brushwork as a clean little Protestant Dutch kitchen.

You never realize how tightly-wound all these paintings are, even the Hals, until you see the lone Fleming in the assembly, Jacob Jordaens, born and died in Antwerp (though buried in Holland, I understand). His painting has a Catholic subject of the Holy Family, and loose brushwork that fairly screams kinship with Rubens.

In this Dutch world, though, the real hero is Rembrandt – but not only because he has by far the largest number of paintings here: eleven in all.  It is also because, in addition to their extraordinarily beautiful brushwork, and the lustrous appearance they present to the world, they also have so much more LIFE in the literal sense of the word.

Most of them are portraits or figure studies, of women as well as men, and including himself as subject as well as his second (common-law) wife, Hendrickje Stoffels.  But there is also a small, entrancing female nude, "The Toilet of Bathsheba."

Above all, the famous "Aristotle with a Bust of Homer" commands the entrance to this show.  No photographic image can really do it justice. However, when seen  in the flesh, it positiively sparkles, with its golds, its whites, its greys, and its lustrous blacks, but it's also a really large picture – I'd forgotten how big it is.

It's well worth every penny of the $2.3 million that the Met paid for it at auction in 1961, the most that had ever been paid for a work of art in a public or private sale at that time.  This was the real beginning of the bull market in art that we have with us still, and it preceded the advent of pop.

The managing editor of Time recognized the significance of this sale, and it was why he put the painting on Time's cover, to accompany a whole cover story on art as an investment…