Us, Them and A Fly on the Wall 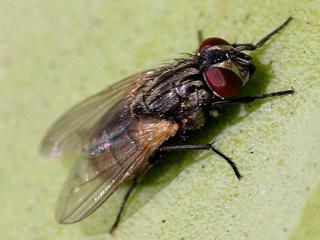 [Every once in a long while, I find it impossible to focus on the art scene, and feel the need to talk about politics. This is such an occasion.  I offer it in the hope that it won't offend either my more liberal or my more conservative art-loving readers.]

Page One headline of the New York Times, Sunday January 6: "In Retreat. Populism Hardens its Us-vs.-Them Attack on Liberals."  Page One for the Times's "Week in Review" (same day) has a similar headline: "The People vs. Donald J. Trump," above an op-ed column by David Leonhardt.

This takes me back to an earlier decade when Them Versus Us reared its head.

It is spring 1965.  I am thirty, and a new writer in the World section of Time, the weekly newsmagazine (still a power in those pre-Internet days).

World is a "hard news" section, where women writers are practically unknown.  I am limited to political stories and features.  A year later, I'd write a feature-like cover story on "Swinging London" for Time. Initially controversial, it would eventually go on into English history books, but that's not what this column concerns.

See me rather as a fly on the wall, enabled by an atypical career to pick up on some things maybe not so apparent to other observers.

In 1965, World also carries many stories about the war in Vietnam. God forbid a mere woman should be allowed to write any of them, but I look at them, and at the Times. In the early 21st century, when writing a memoir, I re-read them all, and Newsweek, plus books written about the conflict since.

In 1965, Time is still backing the war, a "hawk" in the terms of the day. Newsweek is a "dove," challenging the war, and the Times is still fence-sitting. Its reporters in Vietnam cover the fighting graphically, but the paper also publishes a hawkish stateside military analyst, and its Sunday magazine carries articles both against and for the war.

Perplexed, I stroll into the office next to mine.  Here sits a man who writes many of our "Nam" stories. I ask him what the situation is, and he says something like: It looks like a war we can't win. He explains his reasons for this conviction, but that's not what this story is about either, so I shall just say here that for him the Ho Chi Minh Trail is the deal breaker (and I have read books since that agree).

I leave World and begin writing about the visual arts for Time. This is so engrossing that in 1969 I leave Time, go to graduate school in art history at Columbia University, and eventually teach art and art history on a college level.  (Today, I mostly write about art, and mostly on my blog.)

You might believe that this longtime estrangement from the news media would disqualify me as a political observer.

I'd argue that it made it easier for me to see what I'm talking about now, and not only because standing back can help an observer to see the whole picture better.

More to the point is the fact that academia wasn't an ivory tower. It was, after all, campus radicals, especially those in elite universities (like Columbia) who led the antiwar protest in the 60s.

And, although the Columbia campus in the later 70s and 80s was far quieter, the radical outlook of the 60s was still being perpetuated down through successive generations of academics (and college-educated journalists) through scholarly books.

In art history, one biggie when I was in grad school was "Neo-Marxism;" we were encouraged to read "Image of the People" (1973), by T. J. Clark.

In it, Clark argued that the creation and reception of two 1849-50 paintings by the French realist Gustave Courbet had to be understood in relation to the country's 1848 revolution, and the ensuing elections in the newly-founded (and short-lived) Second Republic -- events that Karl Marx had analyzed in two books.

Reading Clark's book (and re-reading it for my memoir) reminded me how in the 60s and early 70s the mightiest capitalist nation in the world was being humbled in battle by a tiny Communist country.

The evident or apparent commitment of the North Vietnamese to their government seems to have made some – maybe many -- young people wonder what Communism had that America lacked.

It didn't turn every young person into a Marxist, of course.  The campus radicals of the 60s were never more than a small percentage of the Baby Boomer generation.  But the situation in America was infuriating to those who wanted to end the war.

First Lyndon Johnson and then Richard Nixon refused to withdraw U.S. forces, nor would Congress go against them-- and this went on for something like ten years – during which period the antiwar protesters had, as they saw it, no ongoing alternative than to march and protest and demonstrate against the war.

In these tactics, they to some extent borrowed the all-or-nothing outlook that Marx had perceived in mid-19th century France.

Then society – as Marx saw it – had been divided into Them (the aristocracy and the bourgeoisie) and Us (the urban proletariat and the rural peasantry). And to the campus radicals of the 60s, the situation was similarly divided into two opposing camps: those who were for and those who were against the war.

And it hasn't ended there. I would argue that on too many occasions since the 1970s we have had an "Us versus Them" situation -- and we get this vestigial, trickle-down Marxism as THE weapon of choice to deal with it.

Too many people, it seems, don't know that Marx's views on society were based on the class structure of early 19th century France, before industrialization had progressed enough to create a viable middle class.

They also tend to forget that the Anglo-American tradition is different – being predicated on the existence (however arrived at) of three elements of government:  traditionally  upper-class & conservative, lower-class & progressive, middle class and acting as a fulcrum, shifting from an alliance with conservatives to an alliance with liberals and back again, to ensure peaceable shifts in power.

Nowadays, of course, it is fashionable in some quarters to think of the lower class – Trump's base – as conservative and lily-livered liberals as dominating the upper class.  However, statistics from the Pew Research Center suggest that this is only true if one equates class to level of education, as opposed to level of income.

However, in terms of income, the category of registered Americans voters earning less than $30,000 a year still has twice as many Democrats in it as Republicans. And for the other income brackets, the numbers of Democrats and Republicans are approximately the same.

This, unfortunately, has done nothing in recent years to shift enough attention away from the predilection for demonstrating that reflects the presence of trickle-down Marxism.

True, there has been some more emphasis on more effective ways to act against Washington, most especially VOTING, but there are still far too many people, especially in the younger age brackets, who think everything is solved by marching & waving signs.

Think of the massive demonstrations assembled to protest official Washington's decision to invade Iraq, the "Occupy Wall Street" demonstrations, and most recently, the huge women's marches that began with the inauguration of President Trump.

Nor is turning out to demonstrate confined to the left. The crowds assembled to support President Trump since the early days of his candidacy testify to that – as do the demonstrations against abortion centers in earlier decades.

The story of The Wall also started out as Us versus Them, or that was how The New York Times was telling it as recently as January 6.  However, after 20 more days of government shut-down, an alternative solution seemingly presented itself..

Both bills lost, lacking the necessary 60 votes needed to pass, but the Democratic bill got 52 votes and the Republican one, only 50.  President Trump must have concluded that he could no longer rely on the Republicans to back him up in the Senate, and that he had better offer a compromise before the situation got yet more embarrassing.

At any rate, on January 25, he and the Republicans agreed to end the shutdown for three weeks, without insisting on The Wall, and the needed legislation was speedily enacted.

Too bad the Times didn't pick up on the significance of this.  Their fleets of reporters have done a grand job of showing the world just how unnecessary a majority of the citizenry living along the border considers The Wall to be, and how swimmingly they are getting along without it.

But the paper is still so hung up on the trickle-down Marxism of Them versus Us that their "news analysis" (by Peter Baker) on January 26 could only crow over President Trump's "stinging" defeat – without giving credit where the real credit was due – to those Senate moderates who had the courage to open up a third way to resolve the crisis, without giving in to either Us or Them.

The Times isn't blind to the need for a middle ground as an alternative to Them – and, if necessary, to Us as well. They have run two articles recently on "middle-ground" politics, "The Power of the Middle Class Shame Vote" by Alyssa Quart on January 6, and "The Loneliness of the Moderate Democrat" by Frank Bruni on January 27.

But they don't seem to want to give credit to Senate moderates (at any rate, when they're Republicans) and they aren't nearly as interested in conflict resolution as they are in conflict.  Conflict sells more copies of their papers.

In the wake of Trump's decision to reopen the government, Congress has formed a joint appropriations committee, with representatives from both the Democratic House and the Republican Senate, to try and come up with a bill that will a) end the shutdown permanently b) offer terms that both parties can vote for.

And what did the Times do with this story? They buried it on Page 14 of the print edition, and allowed it to disappear even more rapidly from the home page of its online edition.

Will any real progress be made toward a moderate solution to this problem of border security?  President Trump may have lost some public support for his insistence on The Wall, but not all the pollsters agree on just how negative his ratings are, and at last reports he was still threatening to declare a National Emergency if he doesn't get what he wants…..

Stay tuned for later installments for this cliffhanger, and let us all hope that at some point we arrive at a more generally satisfactory conclusion.