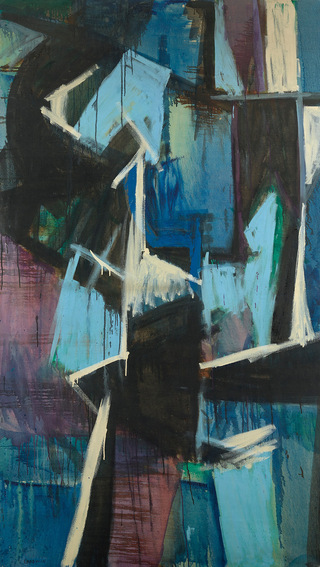 In this year of the woman, it is assumed that any woman painter calling herself "an abstract expressionist" never achieved the renown she deserves because the "old boy's network" of painters like Pollock & de Kooning and critics like Greenberg & Rosenberg discriminated against her.  But does this really apply to Judith Godwin, eighteen of whose paintings, dating from between 1953 and 2006-2007, are on view at Berry Campbell (through March 16)?  The only way you're going to arrive at an answer to this question is to go and see this frequently rewarding show for yourself.

Taken in terms of pure chronology, it is hard to make out a case for Godwin as a challenger to Pollock, de Kooning or any of the other eight giants who are commonly considered members of the first generation of abstract expressionism: Gorky, Rothko, Still, Gottlieb, Hofmann, Motherwell, Newman & Reinhardt.  They were all born between 1900 and 1920 – except Hofmann, who was born even earlier.

Godwin wasn't born until 1930 (and is still going strong).

Moreover, except for Newman and Reinhardt, all these first generation abstract expressionists arrived at their mature styles by 1950 and most had their first solo exhibitions in New York prior to 1950 (Newman's first solo exhibition of  his famed "zips" took place in January 1950, though Reinhardt's black paintings weren't  unveiled until 1963).

These ten  (or nine, if you discount Reinhardt) were the painters who created "The New York School." They were the ones who enabled New York to take over the leadership of Western art from Paris -- both through their paintings and through their exhibitions of these paintings.

Every other "abstract expressionist" was a follower, male as well as female, and even the most distinguished.

A native of Virginia, Godwin didn't arrive in New York until 1953, and her first solo exhibition – though admittedly with the prestigious Betty Parsons -- didn't take place until 1959.

This was late even for second-generation abstract expressionism, considering that its first exhibitions had begun in 1950, and that within three years, the whole art scene would be upended by the advent of pop art and what Greenberg was to call "post-painterly abstraction."

In the purge of abstract expressionism that followed, only the first generation survived unscathed.  Many, maybe most of the second found galleries were no longer interested in showing their work.

Some (like Al Held & Alfred Leslie) radically revised their styles and regained popularity in the 60s. Others (like James Brooks & Joan Mitchell) found Europe more salubrious (though their reputations, too, eventually revived).

Exactly where does Judith Godwin fit into this confusing situation? Well, although she has been called "a third-generation abstract expressionist," and although she has enjoyed a steady and increasing succession of solo and group exhibitions ever since the 1970s, the works on view here are not "post-painterly" in the op or the Color-Field styles of the 1960s.

Moreover, although she has experimented with mixed media in her paintings, I didn't note in this show any of the highly-crusted surfaces I would associate with the '70s, '80s and '90s work of Olitski or Poons.

On the contrary, what I saw at Berry Campbell was a series of very pleasant, gentle paintings in a style I would associate with New York in the 1950s – abstract, but combining shapes and colors in a painterly mode.

Color schemes were subdued:  not high-key like Hofmann, although Godwin studied with him, and not as subtle and sophisticated as Frankenthaler, but very attractive within a range that relied heavily on big jagged shapes of black on fields of creamy-white, with muted accents of other colors, such as mauve, green or brown.

At least, this was the composition and color scheme that dominated more than half of the paintings on view, and would seem to be the mature style Godwin eventually arrived at, in the later 1950s (though one example of it in this show dates back to 1954).

I could wish that these paintings were a little less reminiscent of those of Franz Kline, whom I would class as one of the earliest members of the second generation of abstract expressionism, though many other writers (including Greenberg) have called him a member of the first.

And I suppose it's not too surprising to find these similarities, since Godwin at one point shared a studio with Kline, and in 1963 bought his Greenwich Village town house.

(She can in turn call me "a follower of Greenberg" if she likes.  I am proud to bear the label.)

I believe that she felt she was altering and improving sufficiently upon Kline's style by adding all those supplementary colors to the black and the white.  Admittedly it can make a difference. And her brushwork is often freer and looser than his, with more dribbles and spatters.

I would hazard a guess that – to the extent that they do differ from the work of Kline – it would have helped Godwin achieve a more substantial reputation earlier in the game if she had made more of them, instead of experimenting with so many other different kinds of colors and images.

I was thinking about those first generation males, and it occurred to me that each one of them created a single hallmark or image that stamped every one of his paintings with his individual personality after he achieved his mature style.

They are all so easily identifiable that they become easier to remember and admire and write about, whereas this show of Godwin's wanders all over the lot.

I can't say this is necessarily a difference in talent. Maybe it's just a greater skill in merchandising. But it does make a difference between this show and one of theirs.

That said, I did enjoy some of the atypical paintings even more than the more typical, Kline-like ones.  "Orbit" (1993-94), built around a big moon-like circle and done with mixed media, is entertaining.

And even though the tall, narrow "Seated Figure"(1955) is more late-cubist than abstract expressionist, it has a lot of vim and vigor, especially with all the spatters and drips that enliven its blue, black, white and purple spikiness.

This is a spot-on essay. Your politics may be "liberal" and for all I know "identity politics", but your eye is unmerciful in the sense that it tells your intellect what's what, politics be damned. Bravo.

Also on target is the role "branding" has to the process of gaining recognition. I can only add that branding, just like gender, is not always associated with increased success as art. DeKoonig's women constituted a decline in his achievement, a decline from which he never recovered, though he remained pretty good, probably better than Godwin.

Thanks for the good read.