HARVEY CITRON: REALISM WITH A TWIST 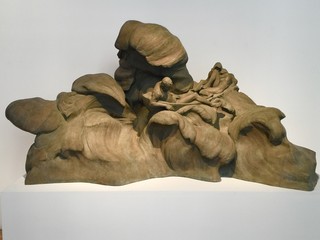 When Rich Timperio was staging his "Nation" shows at Sideshow, I often saw small sculptures by Harvey Citron there.  They were very realistic, nay even academic, but well done and I have an appetite for realism (when well done), so I'd mentioned them in a few of my reviews.   Thus when the New York Academy of Art, where Citron teaches, staged "Harvey Citron: Faculty Sabbatical Exhibition," the artist sent me an email about it. I regret that I only got down to Tribeca to see this show day before yesterday, and I am only writing about it now, two days before it ends.  Still, if this review makes you want to see it, it's right there in the lobby of the building at 111 Franklin Street, and open today (Friday) and tomorrow (Saturday)from 9 am to 9 pm, as well as on Sunday from 12 to 8 pm.

Citron took his BFA from Pratt and a Diploma of Sculpture from the Academia di Belli Arti in Rome before starting to teach in 1981 at the Philadelphia College of Art (now the University of the Arts).  He has been affiliated with the New York Academy of Art since 1994, and  is currently their director of anatomy.

This is a school founded. In 1982 by a group of artists, scholars and patrons of the arts – including Andy Warhol – "to foster a resurgence in the training of figurative and representational art," according to its web page.  This commitment it carries out through "technical training" and "active critical discourse."

I don't know what the "critical discourse" side of the operation consists of,(nor do I much want to know)  but wandering into an open classroom I saw life-sized casts of "The Dying Gaul" and one of the female figures from the Medici Tomb of Michelangelo.  This would suggest that the "technical training" starts out right where art schools in the 19th century started out – by having their students draw from such plaster casts.

Actually, though, the materials that Citron uses are much more up to date.  The show consists of four sculptures and 15 drawings.  While the materials used for the drawings are relatively conventional (sanguine, sepia and black crayon on paper), the sculptures to my innocent eye are made of much more up-to-date materials (Aqua Resin, Hydrocal and Ultracal).

All the work is based upon the nude human figure, but on Citron's web page at the school's website, there is a quotation from de Kooning that runs, "The figure is nothing unless you can twist it around like a strange miracle," and Citron really means it.

Roughly half of the drawings are more or less conventional académies  -- but in the other half, the figures are all but lost in a swirl of lines that surrounds them, and make it difficult to tell if the artist is depicting two or three figures – or just one figure in three separate stages of movement.

Shades of Eadweard Muybridge!  Or should I say, shades of Étienne Marey – that photographer being Muybridge's French equivalent and inspiration for Duchamp's "Nude Descending a Staircase."  (Oh, Marcel, are we ever going to be free of you?)

As for the four sculptures, the life-sized one depicts Cain and Abel, with Cain standing hunched like a predatory animal over the twisted body of his slain brother.

At three-quarters life-size, we have the traditionally serene moon goddess, Selene, fallen to the ground and shielding her eyes with her arms.

About half life-size gives us the figures of Orpheus and Eurydice – who according to Greek mythology were passionately in love with each other – but who in this case are shown with her lying on the ground, and him appearing to have been wrestling with her.

All three of these sculptures are classically white.

The fourth and biggest is gray, and in addition to its human figures offers us a slice of nature – huge bounding waves, upon which floats a small narrow skiff.  In the stern of the rowboat reclines a fully-muscled, mature man, while in the bow a smaller and younger man and woman lie next to each other, clinging together.

The title of this sculpture is "Charon," and again the artist has taken liberties with his classical Greek subject, according to de Kooning's dictum.  Charon was the ferryman who transported recently-deceased human souls from the land of the living across the rivers Styx and Acheron to the land of the dead.

But in Greek mythology, Charon had a pole, and used it to pole his vessel across the waters.  Presumably he had to stand up to do this, whereas Citron's Charon calmly reclines….

But never mind, I forgive the artist, for where he really takes liberties is with the wild free rolling waves in which the small boat is tossed.   If this apostle of the figurative will forgive me for saying so, those wild free waves are – dare I say it? Abstract.  And very nicely so.