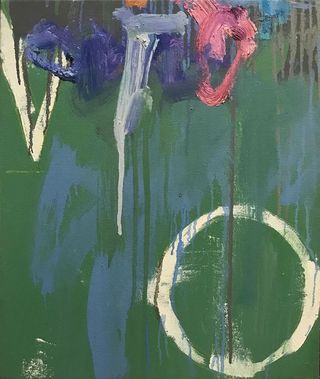 What, after all, is – or was – "Lyrical Abstraction?"  You wouldn't believe what a web of confusion Wikipedia manages to weave around the term!  But that shouldn't inhibit you, gentle reader, from going to --- and enjoying – a highly diverting show of 13 pocket-sized works entitled "Lyrical Abstraction: Small Scale" at Bookstein Projects, at 60 East 66th Street on the Upper East Side (through April 13).

First, the term -- "lyrical abstraction."  The press release for the Bookstein show says it was coined in 1969 by Larry Aldrich, the "esteemed" fashion designer, collector and founder of the Aldrich Contemporary Art Museum in Ridgefield, CT.

(What the press release doesn't say -- but Wikipedia does – is that "l'abstraction lyrique" was also a term that had been used in France since the 1940s to denote tendencies also known as "tachisme," l'art informel" and even "peinture de la matière" (or "matter painting").

(In other words, the term was applied to pretty much every kind of abstract painting that Europe could come up with during the 1940s and 1950s in competition with American abstract expressionism.

(And as such, "l'abstraction lyrique" was used in connection with dozens of painters dating from before 1969, and ranging from French ones like Jean Fautrier to Italians like Piero Dorazio, and Spaniards like Miró.  Even occasional pre-1969 Americans seem to have crept into these discussions, most notably Arshile Gorky.  But I digress.)

Anyway, Larry Aldrich (1906-2001) chose to apply "Lyrical Abstraction" to a collection of pictures by 34 younger American painters that he had assembled (all these painters had been born between 1931 and 1947, and were still hence in their 20s and 30s).

He featured this collection both in an article in the November-December 1969 issue of Art in America and in a touring show that premiered in the spring of 1970 at the Ridgefield Museum and wound up the following spring at the Whitney Museum of American Art.

(I must admit that I have never been to Ridgefield.  In the 1980s I believe it was, I learned that Clement Greenberg was going to be giving a talk there.  I looked into the public transport to Ridgefield, found it too complex, and decided that – much as I enjoyed hearing him talk – I would skip this performance.

(I apologized about this to him.  "I wouldn't go to Ridgefield to hear the true Messiah," he said.  This amused me -- not least because of what it said about his unconscious delusions of grandeur.  But again I digress.)

In the "Statement of the Exhibition" for his show, Aldrich wrote that he had observed "a movement away from the geometric, hard-edge and minimal, toward more lyrical, sensuous, romantic abstractions in colors which were softer and more vibrant."

This description certainly describes the trend back toward the painterly that was so prevalent in the early 70's, though (unlike postmodernist observers) I would describe it as evolutionary rather than revolutionary.

And this description is so vague that it could have been used to describe work by artists who had already become reasonably & even well-known in the '60s, for example Jules Olitski, Friedel Dzubas & Larry Poons.

However, in his eagerness to discover "new talent," Aldrich ignored the moderately or well-known & focused instead on lesser-knowns or even unknowns.  And an awful lot of them didn't blossom into the stars that he obviously hoped they would.

Looking over the full list of 34 names in that 1971 show (listed at Wikipedia), I find only two which recur in the checklist of the Bookstein show, Dan Christensen & Pat Lipsky.

The only other names from the 1971 show that I recognize, and can say I have actually seen work by, are Jake Berthot, Carl Gliko, John Adams Griefen, Ronnie Landfield, William Pettet & Thornton Willis.

By the time I returned, nobody I heard was talking about "lyrical abstraction."   To the extent that I was hearing any new labels for the kind of art that I admired, it would become known in the 1980s as "modernism" as opposed to "postmodernism" aka "neo-expressionism."

It would not be until the 1990s, when I began writing "From the Mayor's Doorstep," that I became aware of the paintings of Landfield and read some of the literature surrounding it.  Here I found references to "lyrical abstraction" and he is still the only individual painter I can think of as actively associated with the term.

On double-checking the Wikipedia entries for Christensen and Lipsky, I do find references to their work as "lyrical abstraction" too, but somehow I find their work meatier than that.

Perhaps this is because in my mind "lyrical abstraction" has somehow become a synonym for "modernism lite."  And, in reading the review of the 1971 show at the Whitney by David Shirey in the New York Times, I think I can see how that association developed.

The Bookstein press release quotes the first part of his evaluation, as follows: Lyrical Abstraction is "eminently appealing.  It is raw, seductive, lyrical and even beautiful art that easily lends itself to esthetic appreciation and whose freedom of form gives rise to romantic associations."

However, Shirey went on (if you look up the original review at nytimes.com), "its sensuality can degenerate into a kind of cloying sensationalism and its romanticism into a milksoppy sentimentality.

"There are works in the exhibition that have avoided this pitfall and others that have fallen into it.  I liked the canvases of David Paul, Ronnie Landfield, William Pettet, Jake Berthot, Gary Rich and Robert Zakanych."

What I would have made of this show back in 1971 I don't know. What seems to have happened over the decades since is that "lyrical abstraction" has become more and more synonymous with "mainstream modernism," at least to judge from the artists included in two out-of-town exhibitions bearing that title and cited in Wikipedia.

In 1993, the Sheldon Museum of Art at the University of Nebraska in Lincoln staged "Lyrical Abstraction: Color and Form."  Among the many artists included were not only Landfield, Christensen & Pettet but also Walter Darby Bannard, Helen Frankenthaler, Morris Louis & Olitski.

The current show at Bookstein represents the closest rapprochement yet between what I would call mainstream modernism and what so many people seem to prefer to describe as lyrical abstraction (the phrase doesn't sound so heavy, I guess, sort of easier to warm up to or dare-I-say patronize).

Call it what you will, this show has a generous sampling of well-done (if modestly scaled) work by artists of heavyweight talent.  There is no flab here, no concessions to second-raters who have sometimes managed to ingratiate themselves with this or that dealer or curator.

I do think that it would have been courteous to include Landfield, considering how well-known are his associations with the term, lyrical abstraction, and I'm always looking for art by less senior artists, but I certainly can't complain about any of the selections that are on view, and which begin with Noland, Poons, Olitski, Dzubas, & Frankenthaler.

Moreover, besides the charming work by Lipsky and Christensen, these selections go on to include a stellar 1962 collage by Esteban Vicente, a diamond-shaped 1983 oil by Stanley Boxer, and two miniature panoramas by Kikuo Saito (who, if he were alive, would have been one of the junior artists in this show).

Saito's "Big O" measures only 16½ by 14 inches, but it has a hell of a lot going on in it, especially with its multiple white & purple drips pouring down over a blue and green field to join with a big white circle below…truly exhilarating….

I thought this was interesting. From recent Sotheby's video on the Steinberg collection: "diverse strains of Abstract Expressionism, Lyrical Expressionist, Colour-Field, Hard-Edge and Minimal" https://www.youtube.com/watch?v=DyqY37SeoTg