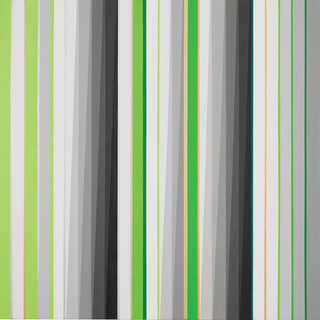 Although the venue didn't send me, there is a lively, exhilarating show of 20 abstract paintings by as many artists in the grandly-styled "Gallery of the American Fine Arts Society" at the Art Students League on West 57th Street (through May 1).  The show is entitled "New York – Centric" and it was curated by James Little, the hard-edged abstractionist whose work I most recently mentioned in my March 1 posting on "The Art Show."

When I said the venue didn't send me, it's because that grand title for it turns out to mean the ground floor entrance hall of the Art Students League, in which 11 of the 20 paintings are displayed.  The registrar's office, to the right of the entrance hall, has 4 more paintings on view, and finally 5 more are in the area occupied by Security, to the left of the entry and sharing space with the monitors for the building's closed-circuit TV.

Still, I noticed that so placed the work was attracting a lot of attention from the students, and prompting what seemed like considerable amounts of serious discussion, so perhaps they were doing more good thus located than in the regular art gallery.

Though Little teaches at the Art Students League, it was not a requirement for the artists chosen that they be directly related to the League, although several were or had been instructors or students at various points in their careers.

Nor was there any attempt to offer a balanced survey in terms of race or gender. Although five of the artists included, among them Little himself, are or were African American, the remainder seem to have been Caucasian.  And only three of the 20 are or were women.  Then again, this is a show about art – not artists.

According to Genevieve Martin, the League's associate director of external relations, "The crux of Little's curatorial conceit regards unadorned abstract painting with a particular focus on artists he feels have been overlooked."

Although some of the artists – like Larry Poons, Peter Reginato & Ronnie Landfield – can hardly be described as "overlooked," others ­– like Tom Evans – were so obscure that even a google search failed to turn up websites for them.

The largest share of the best pictures I found to be in the central hallway, including a small but piquant blue-and- white untitled acrylic on paper by Alma Thomas (ca. 1971), and a large, very painterly lime green on yellow oil on linen by Stanley Boxer, done in 1977.

I also taken by the large & muscular "New Hexagon" (1996) by Al Loving, by a very likeable untitled 8-pointed red star on a yellow field from 1980 by Stewart Hitch, and by the very large and ambitious Dan Christensen, "Jaritto"(1997), with a sprayed-on blue circle in the center, surrounded by white and gold loose brushwork – plus black, green and yellow.  Sounds awful – but it works.

If I were forced to illustrate my review with the most impressive painting there, I would have chosen the Christensen.   But after all the Christensen Estate has a splendid gallery to promote his work, and the focus of this show is supposed to be on the "overlooked."

Therefore I decided to go instead with "Chromatics + Metallics (Green), " by Gabriele Evertz, a fairly small but nonetheless sparkling vista of narrow vertical stripes with a very individual palette of black, white, grays, gold, silver and green.

I'd never heard of Evertz, but she turns out to have been born in 1945 in Germany and to have been teaching for decades at Hunter College, along with Doug Ohlson & Bob Swain.   Both of them are represented in this show, too, and it turns out this whole group is sometimes called "The Hunter Color School." Who knew?

In this exhibition, Evertz looks very nice, though somewhat hidden away in the "Security" space, along with a smoldering explosion of grays by Ed Clark.