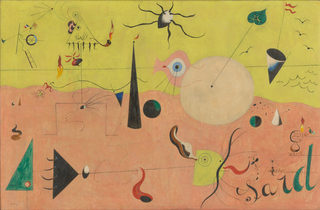 Recently, I joined the milling throngs visiting the Museum of Modern Art on a free Friday evening to view "Joan Miró: The Birth of the World" (through June 15). On view are approximately 60 works by the master Spanish surrealist (1893-1983), almost all from the museum's permanent collection, and tracing his career from 1917 to the mid-1950s.

I suppose he qualifies as a hero to postmodernists because he belonged to an underprivileged ethnic minority.  But hey, if they want to make a fetish of him, it's quite okay with me.  For he was a wonderfully wise, witty and whimsical artist -- one of the all-time greats.

The star of the show (or at least its most widely promoted work) is "The Birth of the World" (1925).  This painting also marks the beginning of my own introduction to this artist, for it was featured in 1968, in MoMA's "Dada, Surrealism and Their Heritage," a show organized by William Rubin.

As Rubin explained this painting to me, it was an example of automatist painting, as practiced by those School of Paris surrealists who wanted to take their method from Sigmund Freud and his writings on the unconscious.

The idea was that the artist scribbled or dripped paint on a canvas, then looked to see what the image suggested to him and proceeded from there, on the assumption that the original idea had come to him directly from the his unconscious.

Because of this, Rubin saw Miró as an antecedent to abstract expressionism and more specifically to Jackson Pollock.

And I, with at least a decade on the couch at that point, was so taken by the whole Freudian package that, in addition to giving Rubin's show of dada & surrealism a rave writeup in Time, went on to do a huge "takeout" on Miró the following summer, with a full-page, color illustration of "The Birth of the World" leading it off.

(All of which can't  have done Rubin any harm in what must have been a passionate campaign to acquire this painting for MoMA -- which he succeeded in doing in 1972, with the aid of a partial gift from the  artist.  But I digress.)

Successive generations of anti-Freudian postmodernist art historians have done their best to discredit Rubin's theory about this painting, and it now appears that it was based on preliminary studies instead of automatist inspiration.

Still, at least one of the preliminary studies still seems to have been an automatist one, so you are at liberty to believe whatever you want about the artist's commitment to old Siggy.

In any event, the field on the canvas is very free, with generous loose sweeps and dribbles of mostly gray paint. And on top of that field, two little figures are performing an act of love – creation in an earthy not a Biblical sense. The male, on the center right, has a red disc for a head (or maybe the head of a spermatazoon).

From this a wavy black line dangles down and to left, toward a reclining female figure with a little white disc for a head. From this implied union, another black line rises, like a flagpole, and from its top flies a black triangular form somewhat like a flag – to mark the moment of union, perhaps.

Anyway, that's what the surrealists seem to have thought when they saw it.  This interpretatioin certainly seems to explain why they named it as they did.

I hope nobody is offended by my oh so literal reading of this painting (which is a first here for my readers; I didn't see it that way back in 1968, and if I had, Time might very well have been too scandalized to let me print it).

But it is not, after all, an abstract picture, for all its proto-Pollockian dribbles.  And it is kind of a wonder to find an artist who can handle cartoon figures with so much grace and dignity.

Most of the world thinks of cartoons in terms of Disney, Lichtenstein and their legions of equally gross followers. Little do they know what they are missing.

Even better in their way are the four jewel-like small oils that hang on the wall to the right of "Birth of the World."

These are Miró in absolutely top form as a painter. Each is a miniature panoply of bewildering and yet enchanting small shapes that bear only tangential similarities to forms in the real world, yet manage to tell some sort of story nonetheless.

"The Hunter (Catalan Landscape)" is a particularly exquisite example of tiny, mystifying symbolic forms run riot. André Breton, the Surrealist poet and unofficial pope for the entire movement, acquired this painting in 1925.

I only wish the museum's conservation department could have done more to bring the paint on these wondrous little paintings back to their original brightness. Otherwise my joy is complete.

Although this show is arranged chronologically, it would appear that in the 1920s, Miró was mostly painting oils on canvas, whereas in later decades,  he departed more towards other media.

This would explain why the first of the two galleries in this show has mostly paintings, while the second is dominated by collages, assemblages, prints, book illustrations, drawings and ceramics.

While there are definitely some major pieces in this second gallery, the mood is not as happy, and the humor tends to have a bite or edge to it.

But these were troubled times, not least for Spaniards who loved liberty.

The dominant painting in this second space is "Still Life with Old Shoe" (1937). It was painted in Paris in the same year that Picasso  was painting "Guernica" – and expresses similarly angry sentiments.

Still, the show ends on an up note, with three ceramic "portraits" created in the mid-1950s by Miró in collaboration with the ceramicist Josep Llorens Artigas (1892-1980).

My favorite is the "Personage" with a tall narrow head and eyes consisting of balls that cling to either side of that head.  It looks like every wise old man there ever was.