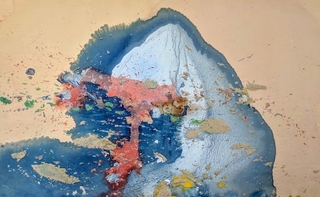 Peter Bradley, We Should Be Heroes, 2018.  Acrylic and mixed media on canvas, 46.5 x 76 inches, Courtesy of the artist and Emerge Gallery.

On the Hudson River, north of Kingston, stands the picturesque town of Saugerties (population 19,000). On its outskirts lives Peter Bradley, the painter, in a handsome 18th century stone house.  Downtown Saugerties is home to Emerge, a pocket-sized gallery that is currently housing a real humdinger of a show, "Peter Bradley: New Work" (through June 30).  Though this show contains only six paintings, and the largest is only a little over 6 feet tall, every one's a winner.

If Bradley's name sounds familiar to my readers, I mentioned him not quite four months ago, in my post of February 25, as curator to the famous (and famously integrated) exhibition, "The Deluxe Show," held in Houston. This exhibition was discussed at length in "1971: A Year in the Life of Color," by Darby English, and that book was featured at the booth of the Chicago University Press, when I was trolling the books displays at  this year's College Art Association conference.

However, Bradley has many other accomplishments to boast of. Born in Connellsville, PA, in 1940, he attended the Society of Arts and Crafts in Detroit, and later Yale. As one of the nation's first African American art dealers, he was associate director of the prestigious Perls Gallery in Manhattan from 1968 to 1975.

He has won fame among his compeers for his ability to exploit the full possibilities of the acrylic gels originally developed by Sam Golden.  I believe that I saw an earlier show of his in Manhattan many years ago, but neither he nor I could remember where or when it took place.

Bradley is best known to me for his experience as a teacher at the now-defunct experimental Franconia College in New Hampshire in the mid- to later-70s. There he nurtured two especially talented younger artists, Randy Bloom & Roy Lerner.

Bloom, who has a studio not far from Saugurties, was kind enough to pick me up at the Kingston bus station and drive me to Emerge, wait patiently while I took my notes, and then return me to the bus station, stopping off on the way at Bradley's house so I could say hello to him and his wife Debra.

But to this show.  As I say, it and even the paintings in it are not large. But the overall concept and execution are much larger.  Three of the paintings – all smaller ones -- were done this year, the fourth smaller one was done in 2007, and the two largest in 2018.

Some merely make use of raw pigment, paints and acrylic gel. Some have occasional other elements, but the common denominator is a thin, stained undercoat with sprayed, poured, and splattered elements on top.

I am particularly struck by the sprays, which can look like the crests of piled- up foaming waves or wisps of storm-driven rain slanting diagonally across the canvas. (This may sound in words somewhat like the "rain" of Larry Poons, but visually the effect is entirely different. Nobody with half an eye could confuse a Bradley with a Poons. Without wishing to detract from Poons's memorable accomplishments, the Bradleys in this show seem somehow lighter and airier by comparison).

The four smaller paintings hang on the left-hand wall as you enter the gallery.  The first, "On a Clear Day" (2019) is mauve and pale rust, with lines in a deeper rust sweeping down from left to right and with granular spatters in deep gold. The effect is light and sunny, like its name.

The second is "Not Quite Here" (2019).  It's the smallest painting in the show, dominated by charcoal gray undercoating, and puddled elements in lighter gray.  A bold band of chartreuse streaks across the top of the canvas, as well as spattered bits of bold blue down below.

Third is "My Ship" (2019). It's the second smallest, and resembles an aerial view of molten greige that looks like sea. Complimenting this greige are only slightly darker or lighter dabs of equally subdued sprinkles. The whole is very poetic, suggestive of moonlight.

Fourth is "Kuiper Belt" (2009).  This is a more robust painting, and one suggestive of Monet water lilies. A gray field to the left resembles water, and it is topped with leafy daubs of green, shaped not unlike lily pads, and joined on the far right and bottom by flower-like daubs of orange and cerise.

Facing these four, on the opposite wall, is "Stone House Series #1" (2018).  This is the largest and most provocative painting in the show, measuring 77 x 74 inches. It has a purple area in the central upper right, from which a huge spray of alfalfa green pelts down from it – like a giant jelly-fish with stinging rays???

But this is only part of the painting's imagery.  The purple and green of the upper right are balanced on the lower left with pinks and mustard sweeps of color.  On the top left is sky blue, descending and intermingled with pale pink.  It all sounds like too much – but it works, suggesting in its totality an underwater paradise.

My favorite picture faces the entry to the gallery.  It is "We Should Be Heroes" (2018). Bigger than the small paintings to its left, it is also smaller than "Stone House Series #11, and centers on a big blue pyramidal shape. This pyramid has a foamy paler blue center at its core, a vehement overwhelming orange splat pitched nearly clear across its center, and other accents of a neutral tan, plus daubs of green and aqua.

The overwhelming impression that this painting gives is of a high wind blowing and a huge wave cresting, perhaps amidst the flotsam and jetsam of a sinking ship. It makes me think of "The Great Wave" (1829-33) by Hokusai, the Japanese woodblock printmaker.  If one looks at that image, one can see a world of difference between the two, but their force is comparable – and the colors of the Bradley are richer and more varied.

Steve Cannon, editor and publisher of "A Gathering of the Tribes," offers an appropriate comment, in his statement included with the Emerge press kit.  It reads in part, "Since abstract artists synthesized various traditions, Mr. Bradley has also acquainted himself with Chinese landscape and the notions of Zen prevalent in Japanese art….What one makes of his paintings is up to the viewer 'alone'."