EVISON ON BOWLING AT TATE BRITAIN 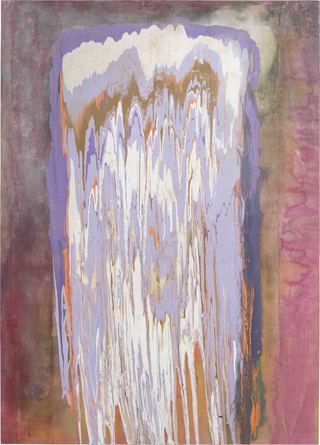 FMD is indeed fortunate to have a review of "Frank Bowling," the massive retrospective at Tate Britain (through August 26).  It was written by David Evison, the British sculptor, whose most recent exhibition has just closed in Beijing.

This is a big exhibition covering 60 years of Frank Bowling's work and I attended the opening. There were almost too many people to satisfy safety regulations and one third of them were of African descent.

Is there a seismic shift in the London art world when an abstract modernist artist is being given this unprecedented attention?

Myself and a friend were looking for modernist painters of our generation, artists who had known Clement Greenberg, and had shown him their work in their studios as had Bowling : we counted just four.

Bowling was born in 1934 in Guyana, South America which was then a British colony and he left for England when he was 19.

After serving compulsory military service (national service), he gained entrance to the Royal College of Art in London but only on condition that he be under review.

He was rescued from these harsh conditions by painter Carel Weight, who later became Professor of painting.

Bowling was elected as a member of the Royal Academy in 2005 through the intervention of a sculptor, Prof. Michael Sandle RA. He thus became the first black Royal Academician.

The curators of the Tate exhibition are Elena Crippa and Laura Castagnini and as usual in retrospectives, early work which may have relevance but not quality is included.

This would include his huge 'Map' paintings, one of which is chosen to publicize the exhibition on large posters throughout the Underground railway system.

The "Map" paintings all have the trace of Africa, S. America or Europe drawn on then, more relevant to Pop Art than Abstract Expressionism which had now informed his visual enlightenment.

Or could it have been that Turner, whose group of near abstract watercolors with ghostly traces of English cathedrals, had played their part in his visual memory?

As with the Grand Tour once made of Europe by English painters, it was customary in the 1960s for English artists to make their way to New York and USA, some to stay, and with their Pop Art friends to further their established careers.

Bowling, when he came to the U.S, was starting anew and the retrospective begins for me with the poured paintings made in the '70's.

The art of Morris Louis and Helen Frankenthaler was being shown in New York and London and their champion was the critic Greenberg.

Bowling's paintings from this period are more complicated and smaller than those of the Americans, using thin paint and then viscous paint to pour his bold range of color.

"Tony's Anvil" and "Ziff" both from 1974-76 are wonderful and with these paintings he has found his way and was making the best paintings by an Englishman anywhere.

He managed to show them in London's West End at a small gallery more suited to gentler art; and the response was nil.

Greenberg had stopped writing about individual artists by the mid-70's but his opinions carried far and wide. He considered Jules Olitski (1922-2007) to be "our best painter," remarks picked up by a diminishing band of abstract artists who listened to him .

Bowling was listening and the next two large galleries show this influence. But what a curatorial mess it is! The works are large, bombastic, pompous even, the exceptions being "Thames 2" (1989) and the smaller "Devils Sole" (1980).

The "Thames" paintings suggest but do not represent water where dabs of gel, a clear impasto substance (their use being another Olitski first), are then worked over with paint to achieve an allover rippling surface. But why does it need an edge streak of color also derived from Olitski, who added streaks of color from his need to anchor a subtle colored mist?

Again it is the smaller intimate paintings that excel such as the beautiful "Sam's Sentinel" group which achieve a ponderous totality compared to the forced totality of the large works where he is trying too hard to achieve it rather than simply allowing the painting to come to its end.

Another New York painter who had a big reputation before he began making modernist abstract paintings is Larry Poons. He exhibited in the 1980's paintings where foam, rumpled cardboard, and even tennis balls had been fixed to his surfaces before paint was literally thrown at them. This paint was thrown to get the paint to run down and over the surface, forming striated rivulets of color and not in any way meant as a performance.

Bowling similarly stuck strips of foam to the canvas; together with the gel this made a surface with lines in bas relief. Then color would be poured, dripped or applied with other means onto this active surface.  Compared to the American's greater expenditure the Englishman's paint application is stinted; however their innovations lead nowhere.

Bowling's strips of foam are like raised linear forms in a bas-relief, and have more to do with colored relief than painting. They might well look better with just the color of the materials. These large showy works look tired, overworked and pompous.

Impressiveness, the Grand Manner has always tempted English artists to overplay their hand; to elaborate and give their art more emphasis than it needs. Why a Guyanese immigrant would do this is not clear.

But this is not the case in the last rooms where the paintings have an intimate scale using separately painted canvas pieces stuck or stitched together.

He is at home here, calm and enjoying his art-making , able to allow whatever his feeling tells him to do, guided by experience. There are not enough of these paintings, and the selection shows that the curators were timid and had to stay within their experience and not take any risks -- the risk of using their eyes to make their very own decisions.

Surely the artist would have wanted more of the later work and to have a say in its choice because these works rival the gems which are his poured paintings made 40 years previously.

The curators have cut him out which he admits on the record to have happened. They have put together an exhibition that conforms to the expectations of a Post Modern art public and in doing so have not given us a true insight into what this superb painter has achieved.

POSTSCRIPT FROM PH: Readers may also be interested in reading Sam Cornish's review of this show:   https://instantloveland.com/wp/2019/06/20/sam-cornish-equivalents-to-life-frank-bowling-at-tate-britain/  I regret that my computer skills are not adequate to make this link work but perhaps devotees will be able to copy & paste it into their browsers.

Id agree with David that somehow the curators have over played their hands and not provided us with the opportunity to experience what a subtle and sensitive artist Frank Bowling really is.