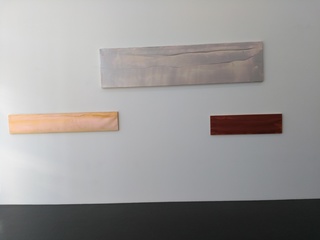 (I am delighted to welcome our roving correspondent, David Evison, back to (An Appropriate Distance) From the Mayor's Doorstep.  His review this time is of the latest show of John Adams Griefen at the Galerie Born Berlin  -- through October 26).

Griefen has for many years made paintings which should not be photographed because he shows us that  they are for eyesight alone. Of course we need reproductions, be it to promote, sell or to remind. But look at "Hotspur" (2019) in this exhibition! Its bright crimson is made hotter by over painting areas in pink of a similar intensity applied both impasto and thinly, plus it uses iridescent paints: all this is enough to give the most skillful photographer a headache.

Griefen is not alone in seeking what is pertinent to the medium he chooses. We can go back to Delacroix who lived when photography was beginning and whose example as a painter who insisted on the material, paint, led to the Impressionists and developments we all know well. And then there is Jules Olitski, whose subtly sprayed mists require time or repeated contact to see the visual complexity and beauty achieved over his surfaces. Jules Olitski has influenced many younger painters in the USA and Canada.  Griefen studied art with Olitski when Olitski was teaching at Bennington College, and the two remained friends for over 50 years. He takes that great modernist artist's discoveries onwards.
.

Of the 10 paintings in this exhibition, 6 have the standard 1:1.5 format and 4 have the unusual 1:4(+) long and narrow format. Few abstract painters have attempted large canvases of these unusual proportions, and none to my knowledge in Europe.  In the U.S., Kenneth Noland's stripe paintings are the most prominent example. And then there is Pollock. In London's Tate Modern, we have his great "Summertime" (1948). In this country, the Munson-Procter-Williams Institute in Utica, New York, also has a long narrow Pollock, "No. 2, 1949."

Griefen's paint application method is with a squeegee onto the stretched canvas. With the 6 standard-shaped paintings it appears to be applied from top to bottom. It leaves ridges of thicker paint which he exploits as incidental and centrally drawn lines. The essentially brown/bronze "Midas" (2018) has many ridges and there is much variation in thick and thin as the tool is scraped across the surface. This is similar to the other 5 of this shape with the exception of "See-line Woman" (2018) which clearly shows where he has begun, the paint becoming like falling water.

These traditional format paintings have marks and incidents, as in "Hotspur" with its red and pink in tandem, and they are essentially traditional in this respect. My favourite is "Lalule Steel" (2018) whose delicate mauves float with the transparent primed canvas made firm with ridges. It asks to be taken seriously as being a painting at all, and the answer is "yes": a great painting.

With all the paintings, one knows it is Griefen. His touch, his 'handwriting', are seemingly effortless, immediate and spontaneous but won by careful and thoughtful preparation before the heart-in-the-mouth act.

The Born Gallery website is https://www.galerie-born.de where one can find an online catalogue. The reproductions do not resemble the paintings enough, although Galerie Born used a professional photographer.