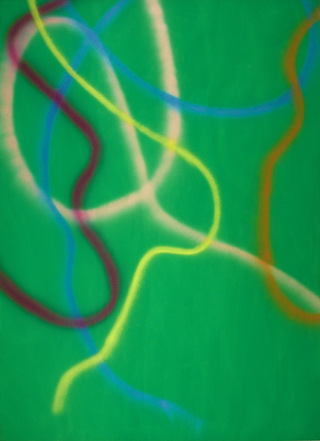 The first third-generation abstract expressionist I wrote about was Dan Christensen (1942-2007). This happened in May 1969, when I was still working for Time, and the story featured the "spray paintings" he was making and exhibiting at that moment.  Recently, I was able to revisit that past at Berry Campbell, when it staged "Dan Christensen: Early Spray Paintings (1967-69)" (closed November 9).  Though this wasn't the first time I'd seen these paintings over the intervening years, I continue to admire them.

According to its checklist, the Berry Campbell show had 16 paintings. All were made to one degree or another, and in one way or another, with the spray guns that Christensen had learned about from Jules Olitski, and that he bought in auto body retouching shops as the technique had not yet reached widespread use within the art world.  But where Olitski opened out the nozzle of the spray gun, in order to cover his canvases with a fine mist, Christensen tightened it so that a fine line was instead directed toward the canvas.

He was only a few years removed from his art-school days in Kansas City, and had initially dabbled in minimalism when he first arrived in New York.  Indeed, some of the spray paintings in this show partook of a minimalist esthetic in that they utilized a regular pattern of lines forming one or more vertical cylinders – to me, they bear striking similarities to those ingenious toys known as Slinkys.

The larger Christensen owned by the Museum of Modern Art, "PR", is of this type.  Dated 1967, it measures about 8' x 10' and was given to the museum by the well-known architect/collector Philip Johnson (the smaller Christensen at MoMA is an untitled flower-like small work on paper, done in 1978 and donated by June Noble Larkin).

There were a number of these "Slinky" paintings in the show at Berry Campbell, as well as a number of other experimental works, but the paintings I liked best were those where Christensen stood back and allowed the spray gun to create large, loose irregular loops of bright colors upon fields of contrasting colors.  This kind of freedom I described in my 1969 article as "romantic" and evoking "feeling."

Today I might more prosaically simply see them as ushering in the "painterly" decades that were to follow the "post-painterly abstraction" of the 1960s. And, while I continue to admire Christensen as a major contributor to that direction, he must needs share that distinction with Olitski and Larry Poons.

When I wrote that story in Time, I used a painting called "Red-Red" (1968) to illustrate it (in color).  As the name suggests, its field is a radiant red, with loops and squiggles of blue, yellow and greenish black.  Imagine my surprise to see that the show at Berry Campbell included this very same painting!  However, it hasn't been languishing in a gallery storeroom during all that time. Very possibly it was bought out of its original show, upon the basis of it being reproduced in Time.

Collectors did buy work reproduced in our magazine, I remember.  When I visited Chicago in the winter of 1967-68, I saw the collection of a man named Robert Mayer. It included a shaped canvas he had bought when it was featured in a story about shaped canvases by my predecessor on the Art page of Time, Jon Borgzinner.

In the fall of 1967, I also did a color page on the "Protractor" series by Frank Stella, timed to coincide with their first exhibition at Leo Castelli.  Sometime in 1969, a collector named Eugene Schwartz said to me, "Have you any idea what's happened to Frank Stella's prices since you did that story on him?" His tone of voice implied that those prices had gone through the roof. I hadn't given the matter any thought, but years later, when I read a Profile of Stella in The New Yorker, I learned that indeed his prices had gone up steeply with that 1967 show.

Of course, those brightly-colored "Protractor" paintings were much more appealing than Stella's earlier black-and-grey "pinstripe paintings," or even his bronze ones (which Greenberg liked).  Still, given the humongous circulation that Time had, with millions more readers than any of the art magazines, the effect of one of our stories (when illustrated in color) about an artist on his (or her) sales must have been sort of like letting a bull into a china shop.

On the other hand, I can't guarantee that those buyers Time attracted were the most knowledgeable or profound in their appreciation of art. Mayer, in particular, didn't strike me as particularly perspicacious.  His collection included an artwork made by his butler (and it looked it).  So possibly whoever bought "Red-Red" first, back in 1969, did so only for its novelty value, and it is still looking for an owner who can appreciate how well it has worn, and what a singularly fine painting it is.

Another excellent painting in the Berry Campbell show with the same large format was "O" (1968), with a field of white and looping lines of red, green, blue, mustard and mauve.  But for reasons I don't fully understand, I was more drawn to two of the medium-sized paintings with all those free-and-easy loops.

Both of them were verticals and both somehow seemed to capture an especially pleasing balance between the organized and the free-and-easy.  One of them was "Chevade" (1968), which if I recall correctly was hung in the gallery's office space.  The other, "Pollux" (1968) was hidden away at the very back of the gallery.  There, with its verdant, vigorous field of green, and its loops of purple, yellow, baby blue and pink, it towered over the narrow space and brought this bedazzled viewer up short.