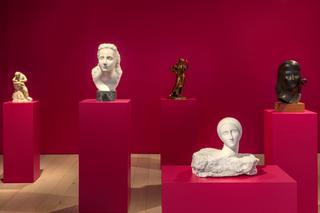 On those occasions when I've seen sculpture by Elie Nadelman in the past, I've found its pointy-toed ladies and pin-headed men a little too cute for me.  However, I have great respect for the taste of David Evison, the sculptor, and on a recent whirlwind visit to New York, he made a point of checking out "Elie Nadelman: Significant Form" at Paul Kasmin in Chelsea (through December 21). I therefore high-tailed it downtown to see what there was to see.

I will say that it's a very attractive show, with its cherry red-painted walls setting off its nine mostly-small white, bronze and black sculptures on pedestals very nicely.  And Nadelman himself comes with a formidable biography. Born in Poland in 1882, he studied there and in Munich before arriving in Paris in 1906.  What a moment to arrive!

Taking Rodin as his point of departure, but also hobnobbing with Picasso, he soon made a name for himself with his streamlined, simplified figures of humans and animals.  His first solo show in Paris in 1909, according to the online Encyclopaedia Britannica, was "a sensational success," and his work was included in the landmark1913 Armory Show.  Among the patrons he attracted were Leo Stein, Gertrude's collector-brother with a mania for Cézanne, and Helena Rubenstein, the cosmetics magnate.

With the outbreak of World War I in 1914, Nadelman emigrated to the U.S.  At first, everything went swimmingly.  His 1915 show at the "291" gallery of Alfred Stieglitz was also a great success. It more or less coincided with the beginning of his making those humorous mannequins for which he is best known today, including "Man in the Open Air" of ca. 1915 and "Woman at  the Piano"  of ca. 1917 (both in the permanent collection of MoMA).

The Britannica hazards a guess that these figures may have been influenced by the doll collection Nadelman had once studied in Munich's Bavarian National Museum – though he was also fascinated by folk art of all kinds.

In 1920, he married a wealthy socialite named Viola Spiess Flannery.  The pair settled in the affluent Riverdale section of the Bronx. There in 1926 they opened a Museum of Folk and Peasant Art to display their extensive collection.  But the Great Crash of 1929 decimated their fortune. They were forced to sell the collection and two homes to stay afloat.  Worse still, Nadelman's art fell from public favor. He became more and more isolated until in 1946 he committed suicide.

The current show has only one piece from Nadelman's Paris period, a small though elaborate polished bronze "Femme Drapée" from ca. 1912, and even it was cast by the artist ca. 1920.  There are also two small and quite naturalistic statues of women from ca. 1935, a marble "Seated Woman (with a leg up)" and a bronze "Standing Woman (with pointed hat)," cast in 1951.

Everything else is from the 1920s, including five more or less life-sized female heads, all in bronze, marble or "galvano-plastique" (a form of copper electrotyping akin to casting a sculpture in bronze).  The one large sculpture in the show is a 53-inch high, galvano-plastique "Seated Woman."  She is as perky, quaint and lively as either of the two large sculptures owned by MoMA.

I actually preferred the heads, especially the "Head of a Girl' and the "Ideal Female Head." Both are ultra-simple and un-cute in their contours, and both aptly illustrate the magnificently modern wall-text, taken from a statement by Nadelman published in Stieglitz's "Camera Work" in 1910.

"The subject of any work of art," he wrote, "is for me nothing but a pretext for creating significant form, relations of form which create a new life that has nothing to do with life in nature, a life from which art is born and from which spring style and unity."