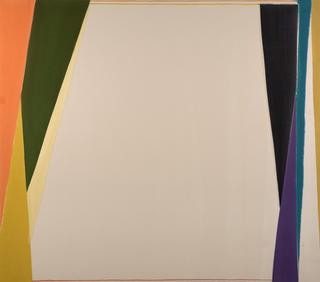 When I last reviewed what seems to have been a more wide-ranging show by Larry Zox, staged by Berry Campbell in May 2017, I concluded that in the 60s, he was more of a minimalist, but by the later 70s, had become more of a modernist – courageously swimming as it were against the tide. This latest – and highly enjoyable -- show catches him in a transitional phase.  It is "Larry Zox: Open Series (1972-1975)", and is again at Berry Campbell, but if you want to see it, you need to hustle, as it is only up until December 20 – this coming Friday.

All sixteen of the canvases in this exhibition, plus its one work on paper, show the artist experimenting with vertical or square formats that play a large, smooth and incident-free center against straight-sided narrow bands or thicker wedges and triangles of more emphatic color along the edges.

Overall the effect was elegant and gracious, refined and relaxed but still stimulating enough to provoke interest.   Strange to think the artist who made them, and who died in 2006 at the age of 69, was in his prime known to engage in gentlemanly rounds of fisticuffs with the professional boxers who came to his studio.  Then again, art is one thing and life is so often totally other.

Some of these paintings have brightly-colored central areas, while in others the centers are white.  Some of the side-area colors are narrow lines along all four edges, while others are broad and most emphatically aligned against the side edges.

On the whole, I felt that those square or nearly-square paintings with white central areas and broad side bands of color were more successful – although (or perhaps because) they summoned up associations with the "unfurled" paintings of Morris Louis.

On the other hand, the verticals with brightly-colored centers and narrow strips of color along all four sides often summoned up echoes of late '60s spray paintings by Jules Olitski; only occasionally did this effect move me enough to feel that it had come off.

One that did come off was hung at the very back of the gallery, on the wall in the third space facing the street.  This painting was untitled and dated ca. 1973.  The center field was muted browns, with purple and orange bands on the right and orange and green on the left (inventory number ZOX-00060).

(Side note:  I understand that Zox refused to give these paintings titles, and the gallery feels it has no choice but to honor that decision by assigning them numbers instead of names.  The result is a sad situation in which the paintings become as impersonal as cars rolling off a production line.  If any artists read this, I do hope they will seriously consider finding ways to avoid this with their own work.)