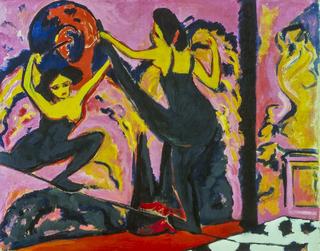 The fact that Die Neue Galerie is taking a fresh look at "Ernst Ludwig Kirchner" (through January 13) is attested to by the fact that it has installed this splendid show of one of Germany's early 20th century pioneers very differently from most of the shows it has held in its third-floor space.  Instead of turning to the right as you get off the elevator, in order to start the show, you must now turn to the left and traverse the narrow hall (with a printed chronology on its wall) to get to the show's first display, in the spacious gallery backing up against Fifth Avenue on the west side of the building.

Here you may see a handsome selection of work done by this German Expressionist (1880-1938) in his youth. Together with the other young artists known collectively as the Brücke, he was experimenting with "the modern" between 1905 and 1911 in and around Dresden.

To Kirchner, "the modern" had to do with bright colors, simplification of form into its rough essentials, and a dedication to rather heavy Germanic vehemence – especially in the portrayal of female bodies, nude, scantily dressed or clad in costumes of various sorts.

This first gallery is almost all pictures of women, though there is an occasional portrait and an even more occasional streetscape as well.  It is all very effective.

On the one hand, we have many paintings of the Mädchen who were girl-friends, models and muses to this group of daring young artists.  On the other hand, we have women performers from the bars and cabarets in suburban Dresden.  The former are seen in various stages of dress and undress; the latter are in their stage costumes and poses.

In the former category, I liked "Two Nudes"(1907), from the National Gallery in Washington; "Doris Standing" (1906), from the Latner Family Art Collection; and "Seated Nude in Blue and Orange (Portrait of Dodo)" (1909-10), from the Baltimore Museum of Art.  All of these were truly worthy efforts.

But I really went much more strongly for the striking color contrasts and vigorous movement in the paintings of the professional entertainers.  I particularly admired "Tightrope Walk" (1908-1910), with its two ladies in black, owned by the Neue Galerie itself, and the row of pink-skirted "Panama Dancers" (1910-1911), from the North Carolina Museum of Art in Raleigh.

You can see what "the modern" meant in Germany. It's less graceful (and less radical) than what it meant in Paris, but there is a muscular solidarity to Kirchner's forms which lends them considerable emotional force.

The next gallery – the long narrow one on the north side of the building, backing onto East 86th Street, presents work by Kirchner done his first three years in Berlin, where he moved in 1911.  His paintings took on a new urgency, most notably in three paintings with jagged lines outlining lean and even skinny women, elegantly clad and walking along city streets.

Way back in grad school, I heard that these jagged forms reflect the artist's exposure to French cubism, which was exhibited in the capital, and I think this is still a valid assumption.  The label-makers at the Neue Galerie prefer to stress instead the emotional tensions of the big city, and the fact that these hungry-looking ladies are really street walkers, garishly lit by the new electric street lamps.

This commentary too seems apt, and applies with additional force to the best-known painting in this series, "Street, Berlin" (1913), owned by the Museum of Modern Art.

Across from the entry to this gallery is a dark little space devoted to Kirchner's wartime years, when he suffered a physical and mental breakdown during military training.  The principal artwork here is a suite of color woodcuts entitled "Peter Schlemihl's Wondrous Story."  It is based upon a novel about a character who sells his soul to the devil.

These images are quite abstracted  and so overpainted that they become difficult to read, but they were given to the National Gallery by Jacob  & Ruth Kainen, and I have always had great respect for the Kainens' taste (having been introduced to them, when I went down to Washington for a year-long fellowship many years ago, by Clement Greenberg.  Jacob was maybe the only person I knew who spoke of Greenberg with the friendly but totally unfazed familiarity that only a true contemporary of his could).

The last gallery focuses primarily on Kirchner's later works after the war, when he was spending extended periods in Switzerland and doing what he could to recover from his breakdowns. Standouts in this gallery were the landscapes, more open and peaceful than the work of the artist's youth.  Also I'm sorry to say, less compelling (the poor man committed suicide at the age of 58, not least because his work had been declared "degenerate" by the Nazis).

Nor -- being still somewhat unsteady on my pins, after my recent knee surgery - was I able to focus successfully on the other parts of this extended show, which include photographs, prints and decorative projects.  But the early parts of it definitely vaut le voyage, as the Guide Michelin used to say.