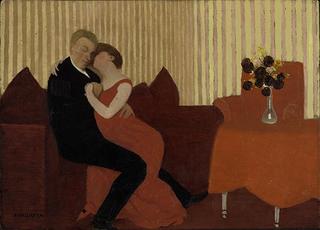 At The Metropolitan Museum of Art we have "Félix Vallotton: Painter of Disquiet" (through January 26). If you can insulate yourself from this show's dystopian title and accompanying dystopian verbiage, you may enjoy some of the very pleasurable painting it displays by an artist who reached the acme of his accomplishments in the 1890s, or only a decade or so before artists as varied as Kirchner and yes, even Matisse (to say nothing of Picasso, Braque & Duchamp) were beginning to put simplicity, strength, and emotion and/or wit before beauty as traditionally defined.

Before then, the "Gay Nineties" denoted a cheerful period when pretty young women danced the can-can in yes, "Gay Paree," with flamboyant Art Nouveau posters and the champagne flowing freely at Maxim's.

Maybe that view of it was overly rosy, but France was at peace, industrializing fast, and comparatively prosperous.  Maybe more importantly, it was enjoying the Third Republic, its first successful foray into democracy – and one that (despite the reverberations of the Dreyfus Affair) would last until Hitler destroyed it in 1940.

You would never guess any of this from the gloom implied in this exhibition's title, "painter of disquiet," or the press release which describes Vallotton (1865 -1925) as having "lampooned the bourgeoisie with acerbic wit " and having "laid bare the urban turmoil of a society in flux."

I mean, hey, nobody and nothing's perfect, and France had its problems in the 1890s – just like any other society at any other moment. Still, this emphasis on "disquiet" and "turmoil" relates more to prevailing attitudes in the U.S. art world of the 21st century, where Duchampian dystopia is the name of the game.

Not least, it applies to the Met, saddled with a new director who grew up in a home where he could, according to an article last year in the New York Times, interact "with leading figures like Joseph Beuys and Claes Oldenburg."

So, what do we really have at the Met?  A very nice – and enjoyably small -- show combining a generous selection of Vallotton's prints with more than 40 paintings.  This was my first foray into museum-land since my surgery, and in my weakened condition I couldn't bring myself to focus on the prints, which seemed mostly dark and grim.

To judge from the accompanying verbiage, this was where the acerbic wit and urban turmoil was happening, but it sure wasn't happening in the paintings, as nearly as I could tell. And – silly me! Other things being equal, I still like to look at paintings with pretty colors more than I do at gloomy black-and-white prints.

At the Met, I saw a modestly-scaled artistic personality creating laid-back but subtly puzzling "problem" paintings in a simplified, "modernistic" style when Vallotton was in his most daring period – the 1890s.  I saw entirely presentable, if less radical, pictures in more realistic, semi-academic styles from before & after the 90s.

Born in Switzerland, Vallotton studied drawing in his hometown of Lausanne before he immigrated to Paris at the age of sixteen to study further at the Académie Julian.  There he perfected his first, ultra-realist style in the 1880s, making a name for himself as a portraitist – not surprisingly, to judge from the remarkable "Self-Portrait at the Age of Twenty" (1885) in this show.  He also began to make his widely-popular prints.

In 1899, he was to marry Gabrielle Rodrigues-Henriques, the wealthy daughter of a well-known art dealer named Alexandre Bernheim. This provided him with financial security and an outlet for his paintings, but seems to have more or less coincided with a return from his most daring work to an ultra-realistic style.

Vallotton's most daring period – throughout most of the 1890s -- coincided with his closest alliance with that semi-mystic group of painters known as "the Nabis," and including (most notably) Pierre Bonnard and Edouard Vuillard.

The group, which went its separate ways as the 20th century approached, seems in its prime to have coalesced  around a journal called La Revue Blanche, as well as around one of the journal's founders, Thadée Natanson, and his attractive Polish-born musician-wife, Misia (Godebska) Natanson (whom I've written about in relation to her muse-like relationship to Vuillard).

This chronological evolution of Vallotton, in and out of comparative radicalism, isn't very clear in the show, as the paintings are grouped more by subject matter than by chronology.  This, too, is the way things are done these days, more and more.

The reasoning here, in my opinion, is that chronology can be embarrassing when it coincides with retreat as well as with advance, as is so often the case today.  And Vallotton is far from the only artist – or the only person – to become more conservative in his old age (my fantasy is that I've moved to the left instead of the right).

In any event, there are quite a number of Vallotton's paintings worth a second look.  Among the best for me were "Moonlight" (ca. 1895), a curious blending of land and ocean, seen by the tricksy light of the moon; "The Ball" (1899), showing a child playing on a lawn with a ball, as seen from an upstairs window, and "The Lie" (1898).

This last (adapted from a woodcut of the same name) depicts an embracing man and woman, over on the left, and a vase of flowers, on the right (the flowers do not appear to be in the woodcut)  One is at liberty to explain the title of this picture for oneself.  My interpretation is that the woman has just finished telling the man that she's bought the flowers herself – to conceal the fact that she's received them from another man.

This painting was owned by Dr. Claribel & Etta Cone, the two sisters from Baltimore far better known for their later patronage of Matisse, just as Gertrude Stein, whose portrait Vallotton also painted, is far better known for her later patronage of Picasso. It was interesting to learn that all three of these dauntless ladies were first involved with the Nabis before moving on to the 20th century masters.

This show embarrassingly indicates why Gertrude moved on by including Picasso's portrait of her (1905-06) alongside that of Vallotton (1907). It's the difference between talent and genius, between a placid fat lady and a monumental folk goddess.  As the story goes, Stein said to Picasso that his portrait didn't look like her; he replied, "It will."

One other noteworthy painting belongs to Vallotton's last and more conventionally representational period, although its brushwork is freer and more semi-impressionist than the licked academic surface of the artist's earliest work.  This is "The White and the Black" (1913).

I see it instead as a close personal relationship between two women who consider themselves equals and are therefore friends or possibly lovers. I suppose this was pretty shocking in 1913, but if one looks at it from the vantage-point of Vallotton's most fertile period, one can also remember that not for nothing was that decade also known as the "Naughty Nineties."