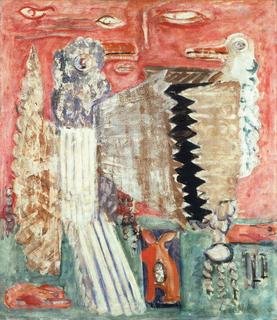 This gallery has two specialties, abstract expressionism and African-American art.  By focusing on ab-ex in the early 1940s, before the movement went totally abstract, this show was also able to include a number of distinguished African-American artists who not even by the 1950s  had gone totally abstract, but who created some powerful paintings nevertheless.  In this context, everybody looks perfectly grand.

The point of departure for this show, as suggested by Barbara Cavaliere, the art historian/critic, was a series of pieces in The New York Times that began in June, 1943 with a review of an exhibition of The Federation of Modern Painters and Sculptors, a fledgling avant-garde group, by Edward Alden Jewell, the paper's senior critic.

The show included semi-abstract and somewhat surrealist early works by two painters who would later become famous. Jewell commented on them as follows: "You will have to make of Marcus Rothko's "The Syrian Bull" what you can; nor is this department prepared to offer the slightest enlightenment when it comes to Adolph Gottlieb's "Rape of Persephone."  The painters protested, and Jewell allowed them to publish their own defense in the Times.

(Can you imagine anybody on today's Times doing as much for two unknown artists?  Not likely.  Nor would the young abstract expressionists stand a chance of getting their solo exhibitions in galleries reviewed by the Times, as they routinely were in the 1940s.  A much fairer ratio between galleries and reviewers existed in those days.

(Today, there must be at least three, maybe six hundred galleries in New York putting on regular one- or two-monthly shows, and the Times runs at most four gallery reviews every Friday.  In the 1940s, New York had about ninety galleries, and the Times ran between 15 and 20 one- or two-paragraph reviews every Sunday, meaning that in a month, it got around to the overwhelming majority of gallery shows. But I digress).

Written in conjunction with Barnett Newman, the statement by Rothko and Gottlieb that was published in the Times contained the oft-reprinted passage that "the subject is crucial and only that subject matter is valid which is tragic and timeless."  Jewell interlarded this statement with whimsically barbed commentary of his own, which these young and still unknown painters must have found maddening.

However, taking his cue from a previous statement, issued by the Federation, on the need for Americans to accept cultural values on "a truly global plane," the critic gave the name "globalism" to the movement for which Gottlieb and Rothko appeared to be spokesman. And the story was headlined, "'Globalism' Pops Into View."

The latest "style" or trend in the art world is to mix art with politics.  When dealing with contemporary art, it serves to mask the lack of formal innovation, but even in historical shows, it seems to be ubiquitous.

Thus Rosenfeld's press release can't resist a political comment, suggesting that this exhibition, with "Globalism" in its title, should be welcome as an antidote to "the isolationist and nationalist views that have now come to the fore in the political and social world of the early twenty-first century."

If you stop to think about it, this should remind you that the social and political world around us was in an even more parlous state  77 years ago. Although the moment was propitious for modern art in New York in 1943, the country as a whole was in the midst of fighting a terrible, full-scale war.

Hundreds of thousands of men in the armed services were dying or would die in the air, on the battlefields and in the oceans.  Cities were being bombed from London to Tokyo, and millions of civilians were being killed or at least imprisoned by the enemy—not in the Western Hemisphere but in Europe, Asia and Africa.  Even the U.S. was fighting wars to its east and to its west simultaneously.  Eleven million American men and women were in uniform.

The presence of so many foreign modern artists in New York was largely due to the hostility toward "degenerate" art and artists that prevailed in Hitler's Germany, and was casting a long shadow over all those countries Germany had invaded, not  least France.

But these same artists contributed to the "internationalism" of the scene so keenly accepted, admired and promulgated by all the future leaders of abstract expressionism.

If undergoing World War II all over again were the price of bringing modernism back to New York in the 21st Century, would it be worth it?

Let us just be grateful for the art that survives, in spite of everything, from that earlier period. For this show offered a rich mélange of many different kinds of work from the 1940s and early 1950s.

Romare Bearden contributed a slightly-more representational (but still cubist) religious subject, "Golgotha (Crucifixion)" (1945). During much of the 1940s, Bearden was represented by the Samuel Kootz gallery, which also handled Hofmann, Motherwell & Gottlieb.

This painting may well have been included in Bearden's first show with Kootz, as it was held in 1945 and devoted to scenes from the Passion of Christ.  Edward Alden Jewell reviewed this show, and advised his readers "Don't fail to see it."

The most memorable painting in this show by an artist of color was the beautiful, deeply-hued Norman Lewis, done in 1946, which hung at the entrance to the gallery, and was almost, almost completely abstract.  Still, if one peered deeply into its reddish brown and blueish black depths, one could barely, barely make out little white stick figures, and the title confirmed their presence, as it was called "Multitudes."

Choosing to emphasize the still-representational 1940s, as opposed to the more forcefully abstract 1950s, also enabled the organizers of this show to include a number of provocative paintings by American surrealists like Gerome Kamrowski and Boris Margo who never really moved on to abstract expressionism.

The show was well supplied with sculpture, most of it small scale.  Nothing by David Smith was included, but there were pieces by Dorothy Dehner, Smith's wife from 1927 to 1952, as well as sprightly contributions by Theodore Roszak, Herbert Ferber, and Seymour Lipton.  My favorite was "Asparas"(1959), by Ibram Lassaw, typical of the delicate brazed-bronze tracery for which he was known.

The best part of the show, though, was that by some of the nascent abstract expressionist painters – for the most part, still young and full of beans.

Not all of them were seen to equal advantage. Although I admired the energy in the small Pollock from ca.1938,  I wasn't wild about the later Pollock from the '50s, or the somewhat scrambled Hofmann.  Still, the small Krasner, "Untitled (Catalogue Raisonné 217"), 1948, was positively enchanting -- its filigree of pourings made it look like a mini-Pollock.

I also went ape for "Toy in the Sun" (1951), a four-foot tall narrow painting by Baziotes. On a greenish gold field, it depicts a blue moon in the upper left-hand corner, and a most curious, long-necked, square-headed and heavy-square-footed blue animal occupying most of the rest of the picture plane.  What a wild imagination that man had! And what a shame he died so young!

Leaving the best for last, I was also most impressed by the works of the two artists who prompted Edward Alden Jewell in the first place to use "Globalism" as his name for the new movement.

Although none of the several Gottlieb pictographs from the 1940s on view resembled "Rape of Persephone," they were notable examples of the genre.  And the Rothko  "Composition" from 1941-42 was clearly if distantly related to "The Syrian Bull."

(Both "Rape of Persephone" and "The Syrian Bull" are in the Allen Memorial Art Museum in Ohio, gifts of Annalee Newman, Barnett's widow, so it may be that Gottlieb and Rothko gave their works to Barnett in thanks for his help in drafting their piece.)

What does the Rothko depict? Well I confess I'm not much better than Jewell might have been in describing it, except to say that it's soft and mellow – and that it appears to be a couple of exquisitely large and fluffy mythological birds, upright as totems, and floating in an environment of eyes and other equally mysterious objects.  Also that it may not be necessary to say anything more.