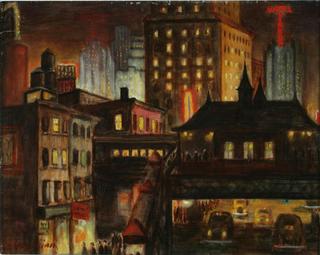 If, like me, you're a passionate New Yorker, you'll relish this latest & very worthwhile excursion into the life & times of Big Apple transport.  It's "Track Work: One Hundred Years of New York City's Subway" at ACA in Chelsea, with nearly 60 drawings, watercolors, prints, oils and images in other media, all bringing history – right up to the present – vividly alive (through March 14).

Actually, the show is about more than the city's subways, since they didn't really get started until the early 20th century.  Before then, New Yorkers got from place to place via elevated trains, so the show really begins with five darkly illuminating wood engravings from Harper's Weekly dating back to the late 19th century.  The earliest is "The New York Elevated Railroad – View in Franklin Square" (1878).

After that, one enters into the first half of the 20th century, when realism was still cutting edge, and the names on the labels are more likely to be familiar.  John Sloan (1871 - 1951) of the Ashcan School,  seems to have had his libidinous instincts brought out by the subway – at any rate, two of his three etchings in this show (both dated 1926) depict pretty young ladies with their skirts hiked high over their legs, and even hints of their garters showing – eek!

Moving on to "The Fourteenth Street School," we have two pictures by Reginald Marsh (1898 - 1951)  The earlier, from 1938, is a watercolor, charcoal and gouache on paper entitled "Times Square Subway Station," but the one which summoned up more associations for me was a lightly-limned watercolor and gray wash on paper from 1944 entitled "Bowery Scene."

With its view of derelicts huddled under the Third Avenue "El," it reminded me of riding on that elevated train as a child with my mother from the Upper East Side down to Chinatown, and seeing these unfortunates begging for dimes from passers-by.  It was only after that "El" was torn down in the 1950s that these so-called "Bowery Bums" fanned out to other neighborhoods.

Not all the work in this show is of equal caliber, but some of the best continues up to the 21st century.  Steven Katz (b. 1951), a longtime New Yorker and resident of the Upper East Side, uses an ultra-realist technique and has had many solo exhibitions in New  York. His two oils on canvas here were both completed in 2019.   "Passing Express" shows the interior of a very modern subway car with two equally modern hip chicks featured, while "77th" depicts the gleaming stainless steel row of subway turnstiles in the 77th Street station on the Lexington Avenue line.

Particularly provocative was work by two artists I had never heard of, Hanns Welti  and Edmund Yaghjian.

Welti still remains largely a mystery.  He is responsible for an intriguingly monumental lithograph in this show depicting "Elevated Uberquert Broadway Beim Herald Square" (1927). ("Elevated Crossing on Broadway at Herald Square") All that the good people at ACA could tell me about him is that he was Swiss, and his dates: 1894-1934.

Google also gave me a reference to a Hanns Welti in the monumental biography of Picasso by John Richardson.  Richardson tells of Picasso being shown around Zurich in 1932 by a Hanns Welti who is described as "a lawyer who dabbled in painting and journalism."  This sounds to me like the same person.

The estate of Yaghjian (1903-1997) is represented by ACA so they know more about him.  Of Armenian parentage, he came to the U.S. with his family at the age of three and was raised in Rhode Island, where he studied at RISD.  Then he came to New York and studied at the Art Students League with Sloan and Stuart Davis.  Between 1938 and 1942, he taught at the Art Students League himself but then moved out of New York to teach and wound up in South Carolina (where Jasper Johns appears to have been one of his students).

The two oil paintings by Yaghjian in this show both date from the period when he was teaching at the Art Students League, and evidently enjoying the mystique of Manhattan to its fullest.  They are "El Crossing at 53rd Street" (1938) and ""8th Avenue El" (1940). What I found so exciting about these paintings is that both are evidently night scenes, so the artist has shown light spookily gleaming through the windows both of the trains – and of the buildings surrounding them.  They're like ghost stories come to life.

I enjoyed your article and because of it hope to make it there before it closes. Btw- it was nice meeting you and enjoyed our late afternoon conversation at the Armory Show yesterday. Stephen Galiczynski