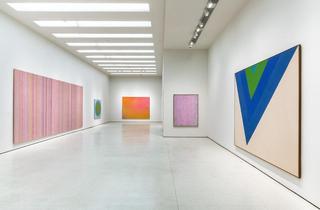 It's all shut up now, but "The Fullness of Color: 1960s Painting" at the Solomon R. Guggenheim Museum is scheduled to remain on view until August 2.  And, although it has only nine paintings, four are gold-standard quality, and the five others at least offer a pretty background to those four.

The four gold-standard paintings, by as many artists, represent the handiwork of Helen Frankenthaler, Morris Louis, Kenneth Noland and Jules Olitski.  And they are fine examples of the work of each.

The five other artists here – all of whom are needed to fill up even this modestly-sized gallery space – are Gene Davis (1920-1985), the Washington Color School painter;  Wojciech Fangor (1922-2015), a Polish artist often associated with op; Paul Feeley (1910-1966), a precursor of color-field and longtime teacher at Bennington College; Toshinobu Onosato (1912-1986), a Japanese artist best known as a print maker; and Alma Thomas (1891-1978), a senior member of the Washington Color School.

Virtually all these paintings come from the museum's permanent collection, which perhaps explains why there are no works here by Poons, Dzubas or Jack Bush.  All three of these excellent artists achieved their most memorable and/or mature styles in the 1970s, by which time the group of artists known in the '60s as "color-field"" painters and in the '80s as "modernists" were no longer as much in style as they had been.

For me, good art never goes out of style – to which I might add that the Guggenheim has only sporadically been interested in color field, even in the '60s.  The literature accompanying the present show explains that its title harks back to a phrase in the catalogue of "Systemic Painting," a show organized for the Guggenheim back in 1966 by Lawrence Alloway, when he was a curator there. But the British-born Alloway (1926-1990) was far better known as an apologist for pop art  – and has often been given credit for being the first to apply the name "pop" to that movement.

"Systemic Painting" wasn't really about color, let alone color-field.  According to Oxford reference.com, the term itself means "the use of very simple, standardized forms, usually geometric in character, either in a single concentrated image or repeated in a system arranged according to a clearly visible principle of organization." And, although Alloway managed to drag a Noland into this show, and an early, op-art painting by Larry Poons, the bulk of his inclusions were less distinguished.

Among them were artists more closely allied with minimalism than with modernism—such as Agnes Martin, Jo Baer, Frank Stella and Ellsworth Kelly.  One was outright conceptual: an all-white canvas by Robert Ryman. The rest ran a gamut from Feeley and the semi-pop of Nicholas Krushenick to a Washington Color School painter, Thomas Downing and the flame-like hard-edged abstraction of Jack Youngerman.   But no Louis, Frankenthaler, or Olitski.

Not that Alloway was unique in having difficulty categorizing all the new directions that abstract painting was taking in the 1960s.  Among the earlier museum shows trying to sort out the confusion was "Toward a New Abstraction," staged at The Jewish Museum in 1963 by its director, Alan Solomon.  This show's equally varied roster had 47 pictures made by 9 artists: Paul Brach, Al Held, Kelly, Louis, Noland, George Ortman, Raymond Parker, Miriam Schapiro, and Stella.

Each artist got an essay in the catalogue by a different author (Solomon himself took Noland, and Louis's essay was by – of all people – Robert Rosenblum, better known by the 70s, when I was in grad school, as an apologist for post-modernism.)  Olitski wasn't included – he was probably not yet that well known, and although Frankenthaler wasn't included either, the Jewish Museum had already given her a show of her own, in 1960.

Possibly the biggest and most widely inclusive group show of abstract painters in the '60s is the one with which I would imagine that this column's readers are most familiar: "Post-Painterly Abstraction," organized for the Los Angeles County Museum of Art by Clement Greenberg in 1964 (for complete details on this show, see the admirable website devoted to Greenberg and created by Terry Fenton).

"Post-Painterly Abstraction" had 31 artists -- more than either of these other two shows – and each was represented by three works apiece, for a grand total of 93 works.

Admittedly, Greenberg had a theory about the art scene that he wished to document. It was based on the contrasts between "classical" (i.e. Renaissance) and "baroque" (later 16th and early 17th century) art and architecture as defined by Heinrich Wölfflin (1864-1945), the Swiss art historian.

To Wölfflin, classical was "linear" and "baroque" was "painterly," the former being distinguished by more serene and balanced composition and (in the case of painting) tight, precise brushwork, and the latter by wilder diagonals and loose, freely-brushed paint

As Greenberg saw it, abstract expressionism of the '40s and '50s had been painterly, but the best new art of the '60s was linear (i.e. "post-painterly"). Certainly, Noland fitted this definition well and Louis could be seen in relation to it.

How well Frankenthaler and Olitski fitted it is more problematic, but their work was included in "Post-Painterly Abstraction" anyway, as was that of Darby Bannard, Jack Bush and Friedel Dzubas.

The further very variegated group included Washington School colorists like Davis and Downing, well-known geometric abstractionists like Held and Kelly,  Canadians like Kenneth Lochhead, and veterans like Feeley, John Ferren  (1905-2003) and Emerson Woelffer (1914-2003).  The baby of the group was Stella (b. 1936), who only turned 28 in 1964.

Whether or not any or all of these artists fitted into the category of "post-painterly" as defined by Wölfflin is perhaps beside the point.  Most importantly, it must have been one hell of an enjoyable show to see.

The same may be said – on a much more modest scale – of the current show at the Guggenheim.

The crowning piece is the Noland, a chevron acrylic on canvas entitled "Trans Shift" (1964).  It towers over the viewer, both because it is more than 8 feet tall, and because its central image is at the top of the canvas.

The painting commands attention also through its authoritative simplicity, with just four of the artist's characteristically distinctive colors.  The central triangle, at the top, is a pure green, halfway between mint and forest; next comes a larger V-stripe of grass green, then a still larger V-stripe of deep, purplish blue and finally a slate blue V-stripe, all set off by the unprimed whiteness of the canvas.

The Frankenthaler, "Canal," is also a winner. It was painted in 1963, soon after the artist had shifted from oils to acrylic, and while she was summering in Provincetown with her then husband Robert Motherwell and thus giving some of her paintings nautical titles.  But "Canal" was formerly in the collection of Mr. and Mrs. Clement Greenberg – as if it needed such a distinguished provenance to attest to its charms!

Again sizeable, it boils up more than seven feet – with the central area, of clouds of golds and gray, especially dynamic. The color range seems limited – a mélange of blues are the only other dominant colors, and serve as a launching pad at the bottom of the canvas --but if you look carefully, you can also spot complimentary touches of green, peach and flesh.

The Louis, "Sarabande" (1959), is also a large painting, more than 12 feet wide. It is also magnificent in its way, but its more subdued color scheme makes it possible for the Noland and the Frankenthaler – on this occasion, anyway – to upstage it.

Made with acrylic resin, it's from the artist's "Veil" series, and combines a very wide range of colors, from browns and deep reds to greens and blues, to say nothing of pinks and purples, all in the center.  The very deep colors at the sides—blacks and dark greens—give the lighter colors at the center a refulgent allure.

These three paintings are grouped at one end of the gallery.  At the other end, facing them, hangs the fourth gold-standard painting, Olitski's glowing "Lysander I" (1970).  A good-sized acrylic on canvas, it's over ten feet wide, and a spray painting, mostly in radiant shades of pink, red and gold. While it's a perfectly lovely painting, it's not the artist at the peak which he would later attain, in the later '70s and the '80s.

The other paintings here are worthy though not exceptional.  The first that the museum acquired (in 1966) is Onosato's "Painting A" (1961-62).  It has a lot of cheery little red squares in it but I would class it as "geometric abstraction," as opposed to color-field painting.   The same may be said of Feeley's "Formal Haut" (1965), a composition built around the artist's oft-repeated image of dumb-bell-like forms that also remind me of children's jacks.

As to Fangor's "M-37" (1970), it vaguely resembles a Noland target of concentric circles, but the oil paint is mistily sprayed on, à la Olitski, so that the inner circles of lime, aqua and green merge imperceptibly out to the periphery of gray.

Gene Davis's "Wheelbarrow" (1971) is the largest painting in the show, an acrylic measuring more than 18 feet wide and nearly 10 feet high. Composed of Davis's hallmark vertical stripes, it is predominantly an upbeat pink, but also with yellow, red, sky blue, dark blue and maroon stripes. From a distance, it reminded me of that old Molly Ringwald movie title, "Pretty in Pink."

A woman and an African American, Alma Thomas has only recently been accorded a place of honor in the Washington Color School pantheon.  But her "Cherry Blossom Symphony" (1972), loaned to this exhibition by halley k harrisburg and Michael Rosenfeld of New York, is unquestionably a  fine painting.

An acrylic on canvas nearly six feet high, it is cunningly composed of two layers of color. On top is a layer of spring-like pink, but beneath is a very dark greenish-black underlying layer, which peeps through the pink in vertical rows of many tiny crescents—a reminder of the branches beneath the blossoms.