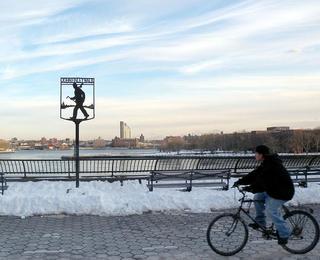 Like every other publication in town trying to cover the art scene, The New York Times  has been hard-pressed for copy during the pandemic.  I'm unimpressed by most of the solutions it's found, but was very impressed by a weekly series on the city's architectural wonders, chosen by Michael Kimmelman, the paper's architectural critic (and formerly one of its art critics, when he sometimes managed to choose right as well).

In each case of this new series, Kimmelman selected a neighborhood, and located an authority on it, with whom he chatted.  Then his interview was edited, condensed, and published to the accompaniment of large and lovely photographs of the subjects he'd been discussing.  The subjects were well-chosen, and the pictures were really gorgeous (especially in the print edition of the paper, though you can still get an idea of how good they were if you access the Times online).

The series started (or at least I first noticed it) on April 8, with a visit to Carl Schurz Park, on the Upper East Side, and its promenade alongside the East River known as John Finley Walk.  John Finley, it seems, was not only famous for his fondness of long walks, but also an editor of the New York Times. The sign memorializing  his exploits stands right in the center of the park's promenade, at 86th Street.

This is my home territory – I've always lived within walking distance of that park, so naturally I'm prejudiced on its behalf.

But I also liked Kimmelman's other selections, which included the Brooklyn Bridge (and the neighborhoods at either end of it), Midtown Manhattan's skyscrapers, Rockefeller Center, Brooklyn (from historic row houses to the Brooklyn Navy Yard), and the southernmost tip of Manhattan (including Battery Park and the financial district).

I was looking forward to seeing what else this astute critic would come up with. He still hadn't dealt with Queens, The Bronx, or Staten Island.   And I was hoping that he could find some less imposing and more intimate spots in Manhattan….and also maybe the Columbia University campus??  Or some other campus? One of those historic mewses in Greenwich  Village? Or maybe the theater district?  Alas, the Times, in its infinite wisdom, discontinued the series, so there's not that much to admire. However – as Spencer Tracy said of Katherine Hepburn in "Pat and Mike," "what's there is cherce."

PS -- added December 20.  Turns out I spoke too soon.  The Times has since revived Kimmelman's project, and he has now dealt with 17 neighborhoods in all.  According to an article by Sarah Bahr in the NYTimes today, the whole lot have now been incorporated in a sort of portfolio and I even got vague whiffs of a hardcover book as a possibility. I don't believe I can set up a link to Bahr's article, but those who already subscribe to the Times should be able to access it through the search box at their website under the title, "A (Virtual) Walk Through New York History."  PH