TITILLATING "ART OF NATIVE AMERICA" AT THE MET 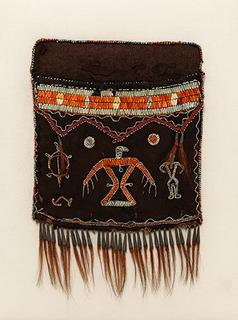 The Metropolitan Museum of Art wants to re-open for five days a week starting August 29. Whether New York State's governor and New York City's mayor will allow this to happen is still up in the air.  Assuming that this re-opening takes place in 2020, visitors will still be able to see a delicious little long-term installation that I saw in 2018 but that remains on view until at least January 26, 2021.  It is "Art of Native America: The Charles and Valerie Diker Collection," and features more than 100 works dating from the 2nd to the early 20th centuries. Represented are more than 50 indigenous traditions from across North America (Canada and the U.S.).

This is, of course, not the first time that the Met has shown the art of Native Americans from the U.S. and Canada.  It has long been a feature of those galleries on the museum's main floor to the left of its main entrance known as the Michael C. Rockefeller Wing, and dedicated to the arts of Africa, Oceania and the Americas.

Back in the bad old days, such art used to be known as "primitive." More recently it has been called "tribal" and most recently (perhaps) as "indigenous."

Other, more isolated examples of Native North American art can also be seen at the Met in its displays of arms and armor, drawings and prints, musical instruments, and elsewhere.

But this is the first time that a sizeable amount of it has crossed the Great Hall and come to rest in the American Wing, to the right of the museum's main entrance on the ground floor.

There it occupies a gallery formerly used for temporary exhibitions (I particularly enjoyed the traveling Thomas Cole exhibition, which occupied this same space during the first half of 2018).

This placement of the current show served several purposes. The first (and most obvious) purpose was that it "upgraded" the status of indigenous art to the same level as the rest of the art in the American Wing, all or most of which was created by Caucasians -- kind of welcomed these "founding fathers"  into the club, one might say.

But it also conveniently retired a space used for temporary exhibitions, saving the museum the ongoing cost of mounting them.

And finally, it enabled the museum to keep some indigenous art on display, even though the Rockefeller Wing, according to a press release dated November 19, 2018, was to undergo a complete $70 million renovation, scheduled to begin in late 2020 and be completed in 2023.

Not that indigenous art – even when it was still known as "primitive" – ever needed such institutional endorsement for the cognoscenti to groove with it.

When Picasso, Matisse, Derain  & other members of the Parisian avant-garde were being wowed by indigenous African &  Oceanic art in the early years of the 20th century, they admired it wherever they found it --  in the Musée de l'Homme or even on a postcard. They were moved by its simplicity and emotional strength; they didn't need to have it shown at the Louvre.

Similarly, when Pollock, Adolph Gottlieb & Richard Pousette-Dart were taking inspiration from what was known as Northwest Indian art in the 1930s, and incorporating all manner of its distinctive shapes and motifs into their own paintings, they were more than content to see it in the Museum of Natural History in Manhattan.

But of course, the average visitor to the Met isn't likely to be an artist, in search of fresh inspiration. Therefore he or she needs to be taught to properly respect the works created by indigenous peoples, or so at least the Met's movers and shakers appear to assume.

Truth to tell, this may be necessary because the works on view look very different from the kinds of "art" that most ordinary people are familiar with (namely pictures and statues, either secular or religious).

And admittedly, there are six late 19th century drawings or paintings on paper, done by artists from the Great Plains, one Haida "portrait figure" from British Columbia, ca. 1840, a handful of  Alaskan (or Canadian,) face-like masks from  ca. 1900, and two Pueblo "katsina" dolls from ca. 1900.

However, everything else in this show would (in my childhood) have been called "crafts" as opposed to "arts."

Put another way, these objects – though wondrously carved , sewn and/or ingeniously ornamented – were originally intended for use as opposed to display and/or veneration.

Most of the works on view are items of clothing (from tunics to a parka to a shaman's mantle), utensils (from ceramic pots to carved wooden bowls and woven baskets), accessories (from combs and purses to a sash, women's hoods and a pair of goggles), blankets, weapons (from a war club to daggers) or musical instruments.

This makes them what (again  in my childhood) we used to call "applied art" as opposed to "fine art."  But hey, what with

1) the emergence of abstract painting and sculpture in the early years of the 20th century – creating fine art forms that (seemingly) depicted nothing;

2) the influence of the Bauhaus, with its glorification of the functional;

3) the ascendance of dada, with its doctrine of "everything can be art if the artist says it is;" and

4) the passion for the antique and archaeology, which has been with us at least since Keats wrote "Ode on a Grecian Urn," this old distinction between fine and applied art has all but withered away.

In fact, even before I was seven, and attending my first "arts and crafts" class in a very progressive school, the Museum of Modern Art was staging a big show called "Indian Art of the United States."  This was in 1941, when MoMA was already at the forefront of the avant-garde.

Or so this show was widely regarded, though who knows what today's "cancel culture" might have made of its prime indoor exhibit.

Very likely it would be said this was desperately lacking in sensitivity, demeaning to Native Americans, and banished from view – but Pollock saw this show (in fact, his wife, the painter Lee Krasner, had actually worked on it, according to her biographer, Gail Levin, painting a wall behind the display with a pottery design).

True, Pollock had worked on the floor before – at least two other modern painters had shown him how.  But the sight of the sand painters seems to have added a spiritual dimension, as in its original state it was a sacred ritual.

Thus, so the story goes, he was inspired to lay his own canvases on the floor. The rest, as they say, is history. And it might never have happened without that retrograde museum display!

Anyway, this show at the Met differs from that 1941 MoMA show (as you can see from those 1941 installation shots, still posted online).

Most notably, outside MoMA's street entrance stood a huge totem pole, and inside was a sizeable and dramatically lit mask, together with what looks to be a six-foot-long feathered headdress and an enormous ceramic pot.  Real zippy '40s show biz.

The current show is more modest (though maybe also more scholarly, and maybe more beautiful), mostly composed as it is of smaller objects and without a totem pole or a monster pot in view.

Moreover, the way it is laid out assigns the indigenous peoples from the western part of the U.S. to the latter part of the exhibit, although the Northwest Native Americans and those in the Southwest area have gotten far more attention over the years.

Specifically, the route that the visitor of this show follows begins with "Woodlands" (the Eastern part of the continent), and then progresses through Plains, Plateau, California and Great Basin – winding up with Southwest, Northwest Coast and Arctic.

Thus the visitor is first confronted with the least familiar kinds of indigenous art – and because it is so unfamiliar, can experience some of the joy and wonder that Picasso and Matisse, Pollock and Gottlieb experienced upon their first encounters with such art.

There are a few very old works in this show – most notably five Alaskan carvings of walrus ivory from between 100 B.C. and 1200 A.D.  But nearly everything else dates from between the 17th and the early 20th centuries -- in other words, after the arrival of Europeans.

And -- particularly in the early parts of the show -- there is evidence that Native Americans and newcomers co-existed peaceably, at least some of the time, for much work on view incorporates materials obviously acquired from European traders and settlers by barter, including glass beads, silk thread and ribbons.

Nevertheless, all of the work on display is based on models handed down from  the era before the arrival of the Caucasians, and based on traditional materials and methods, according to Sylvia Yount, curator-in-charge of the American Wing, and site curator for this show.

"Even the European beads," she explained, "were adapted and made into something unique by indigenous artists."

The clothing and accessories in the early part of the show are particularly fresh and exciting.  According to its literature, they are also predominantly the handiwork of women artists. .

Although each of the hundreds of distinct Native cultures had its own lifestyle, language and religion, all shared a traditional distinction between women and men in the creation of art.

Men made sculptures in a  variety of esthetic forms associated with ceremony, hunting,, and war, representational and visionary painting, feather work and silverwork.

Only a very few works in this show are attributed to specific artists, but among those that are, approximately half are the handiwork  of women.

Particularly appealing are the shoulder bags on display, traditionally used to hold amulets and other small personal possessions. The fringed example here was made by an Anishinaabe artist, comes from Ontario, Michigan, or Wisconsin and dates from ca. 1800. It is a wonder of workmanship.

Made of native-tanned leather, its black field is ornamented in a red, white, brown and silver design made of porcupine quills, dye, glass beads, silk ribbon, metal cones, and deer hair.

Together, they form a complex  but moving little image: a bird with an hourglass body in the center, a turtle to the left and a person to the right. All these figures are part of Great Lakes cultures, and express a complex universe full of seen and unseen forces.