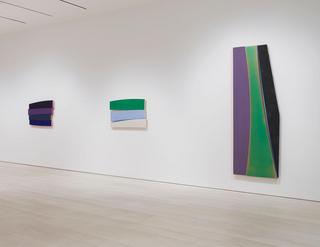 Well, and so I ventured out to a real live gallery, Pace in Chelsea, which has opened for limited viewing (you reserve a time in advance).  But it was worth it, to get away from my neighborhood, and see work by the great Kenneth Noland (1924-2010).   The show is "Noland: Flares" (through August 14).  It has 18 works made of 2, 3 or even 4 shaped canvases painted different colors and sutured together to form new wholes. They were made between 1990 and 1995. Noland's late work can be problematic. But in this case, I'm happy to report, much and maybe even most if not all of it sings.

The show, on the third floor of Pace's new multiplex, is bereft of attendants and labels on the paintings.  Nor are there are any checklists or press releases at the attendant's desk, no doubt because they might be carrying the coronavirus on their surfaces.  On one wall next to the desk is a little square design which I'm told is a "QR Code" and you can use it by opening your smart phone's camera and scanning the code.

I gather this will lead you to a press release and checklist. I say "gather" as I am a Luddite and don't have a smart phone. Pace told me they would revisit the oldfangled notion of putting labels next to the works, so visitors would know what they were looking at, but progress – as e. e. cummings said – is a comfortable disease, so at last reports they are not getting around  to those labels after all.

Anyway, this show is a massive display of careful and excellent craftsmanship. There are few if indeed any straight lines in it and few of these essentially collaged works are monochromatic.

At the same time, Noland still kept his fondness for stripes (the basis for his earlier triumphs), so the 2, 3 or 4 shapes that have been put together are each irregularly-shaped stripes of color, canvases that are far longer than they are wide.

Mostly their surfaces are monochromatic but along their edges, or where they are joined together, may be very narrow strips of plexiglass, and these translucent strips of plastic can give off an unearthly glow.

Another elaboration is that Noland often painted the edges of the stretched canvases – and these different colors often reflect off the gallery's white walls.

These refinements may sound fussy and overdone, and when I read about them in the press release, it was a real turnoff.   However, I had actually looked at the work before I'd read the press release, and none of the little emendations were really bothersome to the naked eye.  I noticed them occasionally, but was not overcome by them – and so I enjoyed the show very much.

Not least – in fact, perhaps most – of the reason was the artist's peerless command of color.  As with much of his later work, it departs from the clear, elemental shades with which he wowed viewers in the '50s and '60s, and searches out somewhat more esoteric combinations.

"Flares: Hot Times" (1990), for example, combines three appetizing horizontal bands of apricot, peach and magenta.  It hangs on the first complete wall to the left that I saw when I entered the show.

"Flares: A Secret" (1990), another horizontal which hangs right next to it, abandons its high-keyed tonalities to go for a basso profundo, with four different shades of deadly-nightshade purple and dark blue.

Third in this row is "Flares: Sunday" (1991/1995). Similar in layout, it has three horizontal bands of color: Kelly green, baby blue and white.  "A sailor's flag in the open air," I jotted down in my notes.

All three of these works feature strips laid close to each other and more or less rectilinear in shape, with flat ends.

At this point, I glanced around to see what else awaited me, and felt at home in general with the lovely colors and their combinations.  "Definitely musical," my notes read.  "Each band of color like a note – 3 or 4 together = a chord."   "Exhilarating" is another word I find in my notes.

"Flares: Rise and Fall" (1991) is different.  Reproduced on the cover of the catalogue, it has three pointed dancing horizontal shapes that suggest fish jumping out of the water.  Their dominant color is cinnamon, but the ultra-narrow strips of plexiglass along their edges and sometimes binding them to each other are blue, yellow and orange.

Nor did the late Noland shy away from working with black, in a few vertical works that are pointed at top and bottom, and stick to two panels instead of three or four.  "Flares: Fade Away" (1991/1995) is the largest of this type, nearly 8 feet tall and with its two wing-like forms edged only in blue plexiglass, to suggest some giant bird.

The gallery's favorite appears to be "Flares: Away" (1991), another vertical with pointed edges and only two colors: a larger black form and a much smaller red form.  This is  reproduced on the press release, and together with "Flares: Fade Away" come as close as possible to recasting Noland as a minimalist instead of a modernist.

This role is further suggested by the press release's quoting Donald Judd on its Page One as an example of the "eminent critics and artists" who "lauded" Noland's work in the 1960s (Clement Greenberg only comes in for a passing reference on Page Three).

My own favorite in this show hangs on the same wall as the first three I described. Although it's a vertical, with a slight cant over to the left, it has a straight top and bottom, and is more nearly rectilinear than anything else. It is trimmed with very narrow strips of peach-colored plexiglass, but the dominant colors of its three main vertical bands are lavender, mint and charcoal.

Somehow those colors and the work's overall configuration spoke to me of one of Noland's most illustrious predecessors, one that I know he admired as passionately as I do.  "Mellow – Matisse colors" it says in my notes.  When I did eventually get to see the checklist, I saw how clearly Noland had conveyed his passion. For the title of the painting is "Flares: Homage to Matisse" (1991).

NOTE: P.H. plans to take a short summer break.  Look for most postings in September.

Thank You for transporting me!