COVID-19 ABSTRACTION AT LICHTUNDFIRE: DARK WITH FLASHES OF LIGHT 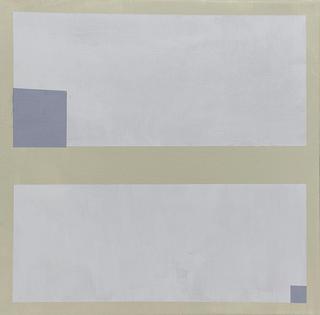 Another gallery open to live visitors is Lichtundfire, on the Lower East Side.   Its show is "Covert 19, Part I – The Quantum Paradox" (through September 13). This consists of abstract work done earlier this year, at the local height of the pandemic.  Like the last show at this gallery that I reviewed (on February 8) it has small- to medium-sized works heavily into blacks, greys and browns.  However, at least one artist, Eveline Luppi, breaks with the dusk by painting on white fields. Even better, she tosses wit into the mix.

Don't ask me to explain the title of this show, or its "concept," which is attributed to Augustus Goertz, one of the participating artists.  This concept – which has something to do with quantum mechanics and particles -- is discussed in the press release, but in theoretical language that defeated me entirely.

Ah well, I suppose such high-flown prose is needed for a gallery on the Lower East Side in order to maintain its status as a venue for the "avant-garde."

As for me, I was happy to see that most of the work on view was composed of more or less traditional media on canvas of one kind or another, and either regularly square or regularly rectangular in shape.

Nor was I turned off by the prevalence of dark colors.  After all, I was one of the biggest fans of Jules Olitski back in the 1970s and '80s, when his palette similarly ran to subdued greys and browns.

In addition to Luppi, two other painters stood out for me, Robert Solomon and Goertz. Everybody in this show is represented by more than one work, and these two painters have three apiece.

Solomon's best painting is "Tristes Tropiques 2" (2020).  It is made of oil, ink and emulsion on photo canvas, and dominated by broad and heavy blackish brown vertical bands of color. At the edges of these dark stripes, hints of underlying colors peep through—blues, greens and lighter browns.

Goertz's best painting is also his largest: "Quantum Force Field 1" (2020), made of mixed media on canvas.  Working out of the tradition of Jackson Pollock, it is composed of very freely thrown pale sprays and drips of blacks and greys on a lighter field, and is quite attractive.

Luppi's paintings are out of another bag altogether -- geometric abstraction, or constructivism. True, they claim descent from the likes of Malevich or Mondrian, but they have come a long way from these ancestors.

Nor are they bland and boring, like '60s minimalism, Robert Morris or Donald Judd.  Though totally different in scheme and spectrum, they may still be seen as distant cousins to a geometric color-field painter like Kenneth Noland.

Made of simple acrylic on canvas, there are four of them in all.  The largest and most ambitious, "Pink Maestro's Lines" (2020), hangs over the desk of Priska Juschka, co-director of the gallery and curator of this show.

This painting, 24 inches square, is a notable accomplishment, but in the end I was more seduced by Luppi's three smaller, simpler canvases, each 12 inches square, that hang in a row within the show itself.

All three play with small areas of grey paint, set upon larger fields of white paint, but mediated by borders and intersecting bands of dulcet greige natural canvas. All three were done in 2020.

I found it difficult to figure out which one I liked best, but in the end opted for "Grey Talk to Me." It has two grey squares on white fields, a bigger grey one up top and a tiny grey one below, talking to each other across a boundary of greige – sassy, witty and wise beyond any need at all to compare.