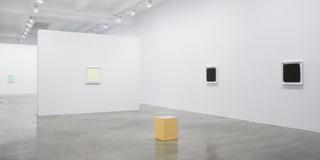 A totally lovely if strangely Spartan show is "Anne Truitt: Sound" at Matthew Marks (through December 19).   Resolutely minimal – as Truitt always was – this show consists of 14 works on paper, each about 20 inches square and created in 2003, the year before her death at the age of 83.  In addition, there are two smaller sculptures dating from 1999. All are from the estate, which the gallery represents, and this is the first time they have been shown. Although late work by even the best artists can be problematic, the "Sound" series in particular – the paper works – are authentically light and airy: they could have been created by the artist in her prime.

Truitt was an exceptionally nice woman. I met her in 1980, when I went down to live in Washington and work on my dissertation with the aid of a fellowship from the Smithsonian Institution.  Truitt had lived for most of her adult life in Washington but was a longtime friend of Clement Greenberg and he gave me an introduction to her.

I found her extremely likeable and our friendship continued after I returned to New York through the exchange of letters and seeing each other when she came up to New York for one reason or another, or when I went back to DC to visit.

I bought and read all three of her books, "Daybook" (1982), "Turn"(1986) and "Prospect" (1996),finding them all sensitive and illuminating.  She in turn responded enthusiastically to my 1983 article in Arts Magazine, "Abstract Painting in General; Friedel Dzubas in Particular."

She told me that she had assigned it to her students in a class she taught at the University of Maryland, and she wrote an eloquent letter about it to me, accepting the theory of multireferential imagery that I introduced in it but also helping me to understand the resistance to this theory by many other artists (to say nothing of many other art critics).

All that said, I have never found it easy to write about Truitt's sculpture, upon which her real reputation rests, and I find writing about her two-dimensional work even harder.  That, I think, is because in addition to being a modernist, she was also a minimalist, and I tend to see modernism and minimalism as opposite poles.

Especially as practiced by the likes of Donald Judd and Robert Morris, minimalism has always seemed to me a dada joke at the expense of modernism – a reductio ad absurdum—reducing abstract art to an absurdity by carrying it to its logical extreme.

Not that I think of Truitt as a humorist, let alone a dadaist, and her sculpture is a lot easier to read, since it mostly consists of square, vertical painted wood columns.

This columnar shape is rich in associations with the external world, while at the same time eliminating yet more such associations. In short, it offers opportunities for observers who must have a link between an artwork and external reality to find such links.

In the current show, though, not one of the 14 square pieces of paper in the "Sound" series has any imagery on it.  Every one is monochromatic, though carefully covered with luscious vertical strokes of acrylic paint, and painted in a variety of colors.

All are mounted on thin but raised platforms in flat and elegant little vitrines with the pieces of paper separated from their framing edges so that they almost seem to float.

But what are we to make of them – especially the all-black and all-white ones?  They defy my theory of multireferential imagery, because in a painting with no defining imagery in it, they depict either nothing or everything.

Since light is white and darkness is black, I hypothesize that white panels incorporate everything and black ones, nothing – but a skilled debater might come up with an argument for the exact reverse.

The display is in two parts.  The first part has five paintings facing the gallery's picture window onto the street.  They surround "Hover," one of the two sculptures, which sits in the foreground.

"Sound Five" (which is white) hangs directly behind it, on a centered partition facing the street, while "Sound One" "Sound Two," "Sound Three" and "Sound Four" (all of them black) hang to the left and right,  two on either side of "Sound Five."

"Hover" (1999) is one of those rare Truitt sculptures which hugs the ground, instead of rising into the air.  The artist has said of it, "I have finally made a sculpture the size of a dog…. I have always wanted to do it, since the early 1960s."

This shape forces the viewer who stands close to it to contemplate the top of the sculpture, which is lavender, and focus only secondarily upon the sides, which are mostly yellow (with a little strip of lavender around their tops).

The second half of the display is behind the partition on which "Sound Five" is mounted, and includes the nine other panels, together with another small sculpture, "Pond Sound."

The panels are titled "Sound" (Six through Fourteen) and painted different colors – dark blue, lemon yellow, orange, off-white, baby blue, maroon, and a few that may also be black but could conceivably be a very dark forest green.

Though I would like to be able to praise the more colorful "Sounds," in the end I concluded that the white and off-white ones were most effective, and after that the black ones.

The most important reason is that the white ones especially show off the artist's brushwork most successfully, and accordingly emphasize Truitt's exquisitely handmade and esthetic approach.

This raises the completed panels above the level of the machine-produced which is – or at least was – such a prominent part of the appeal of minimalists like Judd and Tony Smith back in the 1960s.

Anyway, it is all very pure, and reminded me forcibly that for three years, between 1964 and 1967, the artist was based in Japan – where her journalist-husband, James Truitt, was working in the Tokyo bureau of Newsweek (previously, he had worked for Life and Time).

I can't help thinking that the artist absorbed some, maybe a lot of Far Eastern philosophy and/or religion, because I found myself looking at this show and thinking of the famous Zen Buddhist koan (or saying): "What is the sound of one hand clapping?"

Although I have little knowledge of – and less sympathy with – Asian religion, I gather from google that this koan isn't meant to have any answer, but rather to return whoever is meditating on it to an awareness of the futility of reason to explain everything, and by rejecting reason to open the door to enlightenment.

All of which, in an odd sort of way, applies to my understanding of Truitt's unique blend of modernism and minimalism.