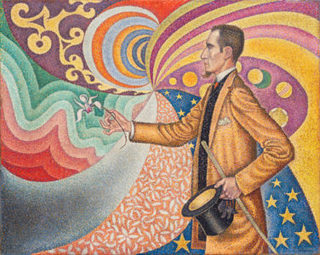 In 21st century America, "anarchists" is a term used by Donald Trump to attack left-leaning, often poor and especially African-American people in cities who demonstrate against him.  But in late 19th century France, the term might be a compliment: even middle-class and even affluent white people could be anarchists.   One such was Félix Fénéon (1861-1944), subject of a meandering but ultimately highly enjoyable exhibition at the Museum of Modern Art called "Félix Fénéon: The Anarchist and the Avant-Garde—From Signac to Matisse and Beyond" (through January 2, 2021).The nicest part of it is that we get the politics (anarchism) over with relatively early in the show, and focus far more on the esthetics (avant-garde).

Born in Turin (Italy), Fénéon was raised in Burgundy (France), perhaps because his father was a traveling salesman.  He did so well in school, however, that he scored at the absolute top of the competitive exams for jobs, came to Paris and went to work for the Ministry of War—where he moved up the ranks to become chief clerk.

In his 13 years at that "day job," he edited a number of books, including work by Arthur Rimbaud, one French Symbolist poet.  He was also a regular at the Tuesday salons of another Symbolist poet, Stéphane Mallarmé.

Moved by the plight of the underprivileged in the otherwise thriving Third Republic, France's first successful experiment in representative government, Fénéon became active in anarchist circles – which called for the total destruction of all governments.

The anarchists believed that if you could do away with governments, the bourgeoisie and capitalism, everybody would live in peace and harmony.

(Trust me on this -- I did a term paper in college on Bakunin, arguably the best-known and certainly most Russian of all anarchists.  His proposals for open warfare on all governmental institutions in the oppressively despotic Czarist regime ultimately provided the game plan for Lenin.)

Fénéon didn't get that far. In 1894, he and 29 other suspected anarchists were arrested by the Paris police on charges of conspiracy, following a number of politically motivated bombings.

Ultimately, he was among those acquitted of the charges, but in the meantime he made a name for himself during the so-called "Trial of the Thirty" by the wit and humor which he displayed during his testimony.   Not only was the jury amused, but so were the attendant reporters and through them, the general public.

More importantly, while still at the Ministry of War, Fénéon wrote and published (in anarchist journals, between 1883 and 1893) reviews celebrating an emerging artistic movement led by Georges-Pierre Seurat and including also Paul Signac and Maximilien Luce (the last two also being anarchists).

Fénéon was the first critic to perceive and describe their pointillist technique. This consisted of painting many differently colored dots on a canvas, secure in the belief that when the viewer stood back from the canvas, at a distance, the dots would blend together on the surface of the eye.

Fénéon coined the term, "Neo-Impressionism" in 1883, to refer to this group of artists, and was among the first to expound upon the fact that pointillism was based on contemporary scientific beliefs regarding how the eye responds to color.

As a result, the opening galleries of the show at MoMA have – in addition to quantities of memorabilia, documentation regarding anarchism and contemporary periodicals and posters – a fine selection of pointillist paintings.

The star of the show – if only for its topical relevance – is Signac's "Portrait of Félix Fénéon" (1890), with the critic seen in profile and behind him all sorts of colorful cartwheels and fireworks going off.

True, this painting is not exactly news to dedicated MoMA visitors, as it is in their permanent collection, but it's worth careful re-examination, even if on the whole Signac is only a distant second to Seurat in the pointillist sweepstakes…..

Seurat is also represented handsomely in this show's early galleries, with marvelous small nudes and the nearly full-size preliminary study for "A Sunday on La Grande Jatte" (1884), loaned by the Metropolitan Museum of Art (it would be too much to ask the Art Institute of Chicago to lend the finished painting – it probably doesn't travel any more than MoMA itself lets "Les Demoiselles d 'Avignon" out of its sight).

Some of the smaller landscapes by the lesser pointillists are quite attractive, too, though Signac's heroic male laborer, "The Demolition Worker" (1897-99) is a tad corny – too much emotion sometimes gets in the way of esthetically-rewarding portrayals.

There are also many small works – especially drawings – by Seurat later in the show.  This is a tribute to Fénéon's lasting devotion to his discovery, though Seurat died tragically at the age of 31, in 1891.

However,, the best thing about this show is that it does its thing regarding pointillism and anarchy and then moves on -- telling the viewer lots about Fénéon that I never knew – and that carries his career and the art world he lived in beyond the 1880s and into the yeasty worlds of the 1890s and early 20th Century.

One result of the "Trial of Thirty" was that the critic got fired from his job at the Ministry of War. His lawyer, Thadée Natanson, offered him a job at La Revue Blanche, and he worked there until 1903 (when it folded).  La Revue Blanche was a fine progressive magazine – but artistically closer to Les Nabis than to Neo-Impressionism, so instead of more Signac we get lovely works by Pierre Bonnard and Édouard Vuillard.

Bonnard's sweet little "Circus Rider" (1894) is an exercise in stopped motion, while his "Woman Dozing on a Bed" (1899) captures an electric sprawling pose. Vuillard's small "À La Revue Blanche" (ca. 1896-1901) captures Fénéon at work on the journal, while his larger "The Folding Bed" (1903) features another luscious reclining nude.

Moreover, that is not the end of the story. When we pass into the second and larger, airier exhibition space, we are entering into the domain of Fenelon's artistic pursuits in the 20th century.  Here it turns out that after a couple of years doing editorial work on a less interesting journal, he in 1906 took a high-ranking position on the staff of the well-known art gallery Bernheim Jeune.

He was hired to bring avant-garde art into its relatively conservative stable.  Naturally, he soon had the gallery signing contracts with his Neo-Impressionist friends, but more importantly he moved on to a whole new generation of artists, including Kees Van Dongen and more importantly, Matisse.

In 1907, in fact, he persuaded Matisse – who was not yet very well known—to sign an exclusive contract with Bernheim Jeune.  This provided the artist with financial stability for the first time in his career, and he would remain with the gallery for nearly twenty years.

The fact gives the organizers of the MoMA show an excuse to display no fewer than six delicious but modestly-scaled early paintings by Matisse – showing off both his gifts as a draftsman and as a colorist.

They begin with the forthrightly Fauvist "Interior with a Young Girl (Girl Reading)" (1905-06) and continue through "Landscape Near Collioure: Study for The Joy of Life (1905) to "Periwinkles: Moroccan Garden" (1912).

True, all but the "Landscape Near Collioure" are from MoMA's permanent collection, but most if not all of them normally reside in its voluminous stacks and are not often on view, so it's a joy to see  them here. Such life! Such exquisitely gentle feeling!

For me, I guess this is almost the best part of the show, but this large space also enfolds many other worthies.   Not least is a miniature exhibition of Italian Futurists, including canvases by Umberto Boccioni, Carlo Carrá, Luigi Russolo, Gino Severini and Giacomo Balla – again, with three out of five from MoMA's too-rarely-seen permanent collection, and with two well-chosen loans.

They are all assembled here because in 1912, Fénéon arranged a big Futurist exhibition for Bernheim Jeune that drew huge crowds and put the Futurists on the map of the Parisian avant-garde.

For reasons that relate to Fénéon's other activities, we also have cameo appearances – of only one or two works apiece – by Van Dongen, Amadeo Modigliani,   Henri de Toulouse-Lautrec and Félix Vallotton.

Indeed, Fénéon was a collector as well as a dealer and a critic. Over the years, he assembled a massive trove of treasures, which (instead of being left as a group to a museum) were individually auctioned off after his death.

Not least among his passions was what was called "l'art nègre," or "Negro art."  This term was used by Western critics and collectors in those days to refer to all indigenous art, regardless of where it came from.

So in addition to all the splendid paintings in this show – to say nothing of its heavy-handed helping of memorabilia, political documentation & scientific underpinnings– there is a fine display of indigenous art.

Mostly but not exclusively it is from former French territories, including the Ivory Coast and the Middle Congo – as this is where the bulk of this remarkable man's indigenous collection came from